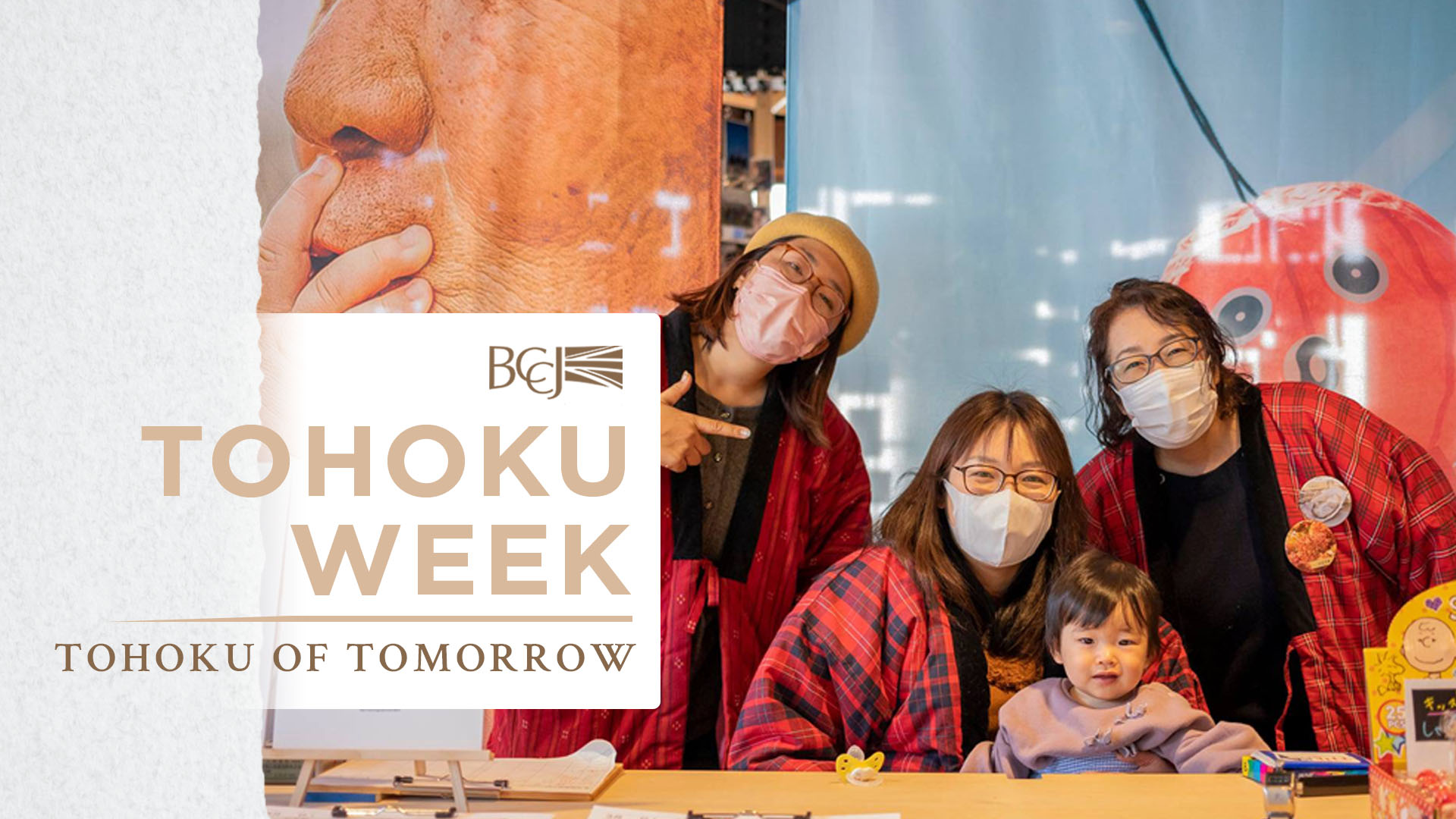 We hope you’ve enjoyed Tohoku Week (July 12-16, 2021), throughout which the British Chamber of Commerce in Japan (BCCJ) has highlighted local businesses and tourism in the three prefectures most acutely affected by the Great East Japan Earthquake and tsunami of March 11 2011 – Miyagi, Iwate, and Fukushima.

As well as sharing updates on commerce and culture, Tohoku Week has invited you to connect with the stories of local people who continue to work hard to rebuild their lives, livelihoods, and their local communities.

It has also presented simple ways for you – and perhaps your company – to engage with and support locally-driven projects.

Message from Her Majesty’s Ambassador to Japan

To wrap up Tohoku Week, we are very pleased to share a message from Her Majesty’s Ambassador to Japan, Julia Longbottom CMG.

“Hello to everyone at the British Chamber of Commerce in Japan and to everyone joining in the Tohoku region. I’m delighted to be able to send this message to you today in support of the BCCJ Tohoku Week.”

After reflecting on the events of 3/11, the Ambassador points to a variety of bilateral projects between the UK and Japan, including Fukushima Garden in Holland Park in the Royal Borough of Kensington and Chelsea, “a symbol of unity between the people of Japan and the United Kingdom.” She also recalls the official visit to Tohoku of HRH The Duke of Cambridge Prince William in 2015, when he visited, among other sites, Smile Kids Park in Motomiya Fukushima to meet some of the parents and children of the city. “The Prince also planted an English oak tree in the park, which was meant as a symbolic wish for Fukushima’s speedy recovery.”

Indeed, at that time Prince William said his visit to Tohoku was the most important part of his trip to Japan. 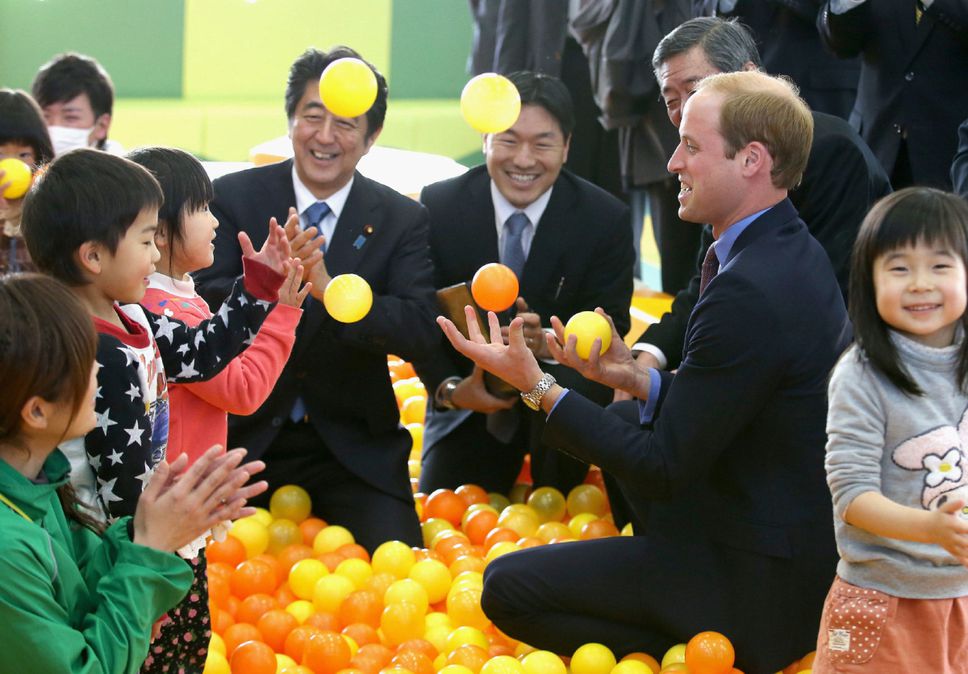 Referring to bilateral science and technology ties in Fukushima, the Ambassador says that “British nuclear companies are using their decades of expertise from the UK nuclear industry to support the Fukushima Daiichi decommissioning effort, supporting local jobs and enabling the clean-up of the nuclear plant.”

Ambassador Longbottom goes onto acknowledges the strong personal bonds that exist between the people of the UK and the Tohoku region “I know that there are British people living in Tohoku who are doing their best to forge strong links of friendship and cooperation between our two countries. I hope that we will see British companies also attracted to the region. We can all play our part.”

In signing off, the Ambassador remembers fondly her 500km cycle ride from Tokyo to Minami Sanriku in Miyagi Prefecture in 2015 and hopes to be able to return soon. “I have already visited different parts of the Tohoku region during my previous postings in Japan and have very good memories of the people I met and the delicious food. I look forward to visiting the region as soon as I can and seeing for myself the amazing work that BCCJ members are doing with local enterprises.”

With many thanks to Ambassador Longbottom for her message and support of Tohoku Week!

What did we learn on our journey around Tohoku?

Reflections from the BCCJ Team

As Tohoku Week draws to a close, the BCCJ team reflects on the chamber’s first ever Japan regional deep-dive.

BCCJ Executive Director Lori Henderson MBE says the team’s been working round the clock to bring members and our wider ecosystem stories from the people of Tohoku “and present you with businesses and community projects that might benefit from future support”.

Sarah Backley, BCCJ Associate Director who grew up in Sendai in Miyagi Prefecture, says it’s been really rewarding, like she’s “come full circle”. Highlights have included seeing how sport and sporting venues have played a significant part in the revitalisation of Tohoku, and observing the complete transformation of areas that had been completely decimated on 3/11, such as Onagawa in Miyagi.

Sam Maddicott, responsible for BCCJ Communications says Tohoku Week has been a rollercoaster and “quite emotional as well at times”. One of Sam’s stand out stories comes from Koriyama in Fukushima Prefecture, which has actively engaged younger leaders in rebuilding and restoration efforts. Another favourite moment was learning of Yamada-san in Kamaishi in Iwate Prefecture, and his efforts to bring a unique kind of eco-tourism to his local area.

Thanks and The Future

The BCCJ wishes to thank everyone who provided content for Tohoku Week!

Honourable mention goes to Ishinomaki-based BCCJ member Kyoko Sasaki – one of the local leaders of the BCCJ’s Back to Business for Tohoku initiative – for her video tour around restaurants and other local spots in Ishinomaki and Onagawa on Day 2 of the campaign. Many thanks also go to HM Ambassador to Japan, Julia Longbottom CMG; Director of the British Council in Japan Matt Knowles; and HM Consul in Japan, Martin O Neill MBE for their contributions.

While Tohoku Week draws to a close, Sarah says the BCCJ will open up a new space on the chamber’s website, for any new Tohoku stories. “Report back with anything you think are worth highlighting on our channels.” “Try to find your own stories” says Sam.

In closing, Lori pays tribute to the Endo family of Watanoha, near Ishinomaki in Miyagi Prefecture.

In Tribute – The Endo Family

Tohoku Week is dedicated to all those who suffered loss due to the events of March 11 2011, with special tribute to the Endo family. Shinichi and Ryoko’s three children – Hana, 13, Kanta 10, Kana 8 – were taken by the tsunami. We first met Shinichi and Ryoko in July 2011. Their commitment to community building in the face of unspeakable tragedy will stay with BCCJ B2B colleagues forever. A brief overview of the Endo family’s current projects is below. 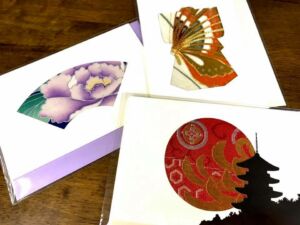 Ryoko Endo and local friends established IshinomaKimono as a community project to bring together those affected by the losses of 3/11. The group now produces beautiful handcrafted products such as greetings cards and traditional trinkets, using kimono fabric rescued from the tsunami. Cheer on IshinomaKimono ladies HERE

Shinichi and Ryoko Endo are also at the centre of Team Watahoi, established to support the revitalisation of their local area, Watanoha, near Ishinomaki. Watahoi is the abbreviated name of the Watanoha daycare center. Team Watahoi was pleased to help stage a photo exhibition in March 2021, to mark the 10th anniversary of the 3/11 disasters. The exhibition was led by photographer Keisuke Hirai and the theme was “happiness”. 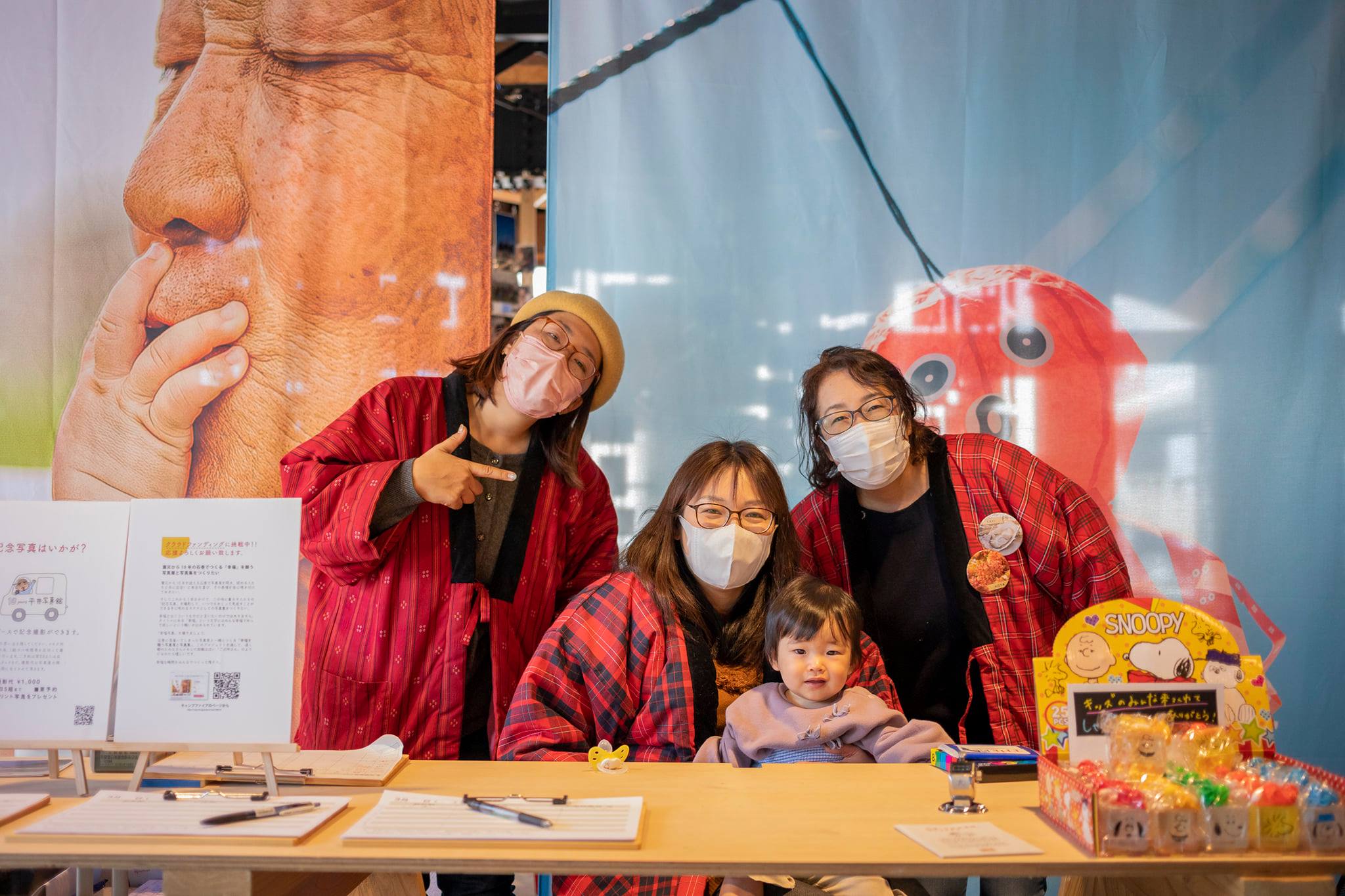 Shinichi Endo also runs a woodworking company and now teaches local children about the value of trees and wood. In 2011, Shinichi was asked if he could make a set of bookshelves to be dedicated to Taylor Anderson, a 24-year-old American teacher who taught English to his children and was also taken in the tsunami. In 2014 Shinichi built “Niji no Kakehashi” (“Rainbow Bridge”) playground in Watanoha. He then built two further jungle gyms – one for the children of Rikuzentakata, Iwate Prefecture, and another in Ishinomaki for the Kokoro Smile project, a support group for children who lost their parents or are suffering trauma from the tsunami. The BCCJ has been proud to work with Mr Endo, and the entire board of the Taylor Anderson Memorial Fund for the past decade. More about Mokuyuboku HERE

With sincere thanks again to all BCCJ members, partners and friends who contributed to Tohoku Week. Most of all, thank you to friends and colleagues in the Tohoku region for their incredible contributions. 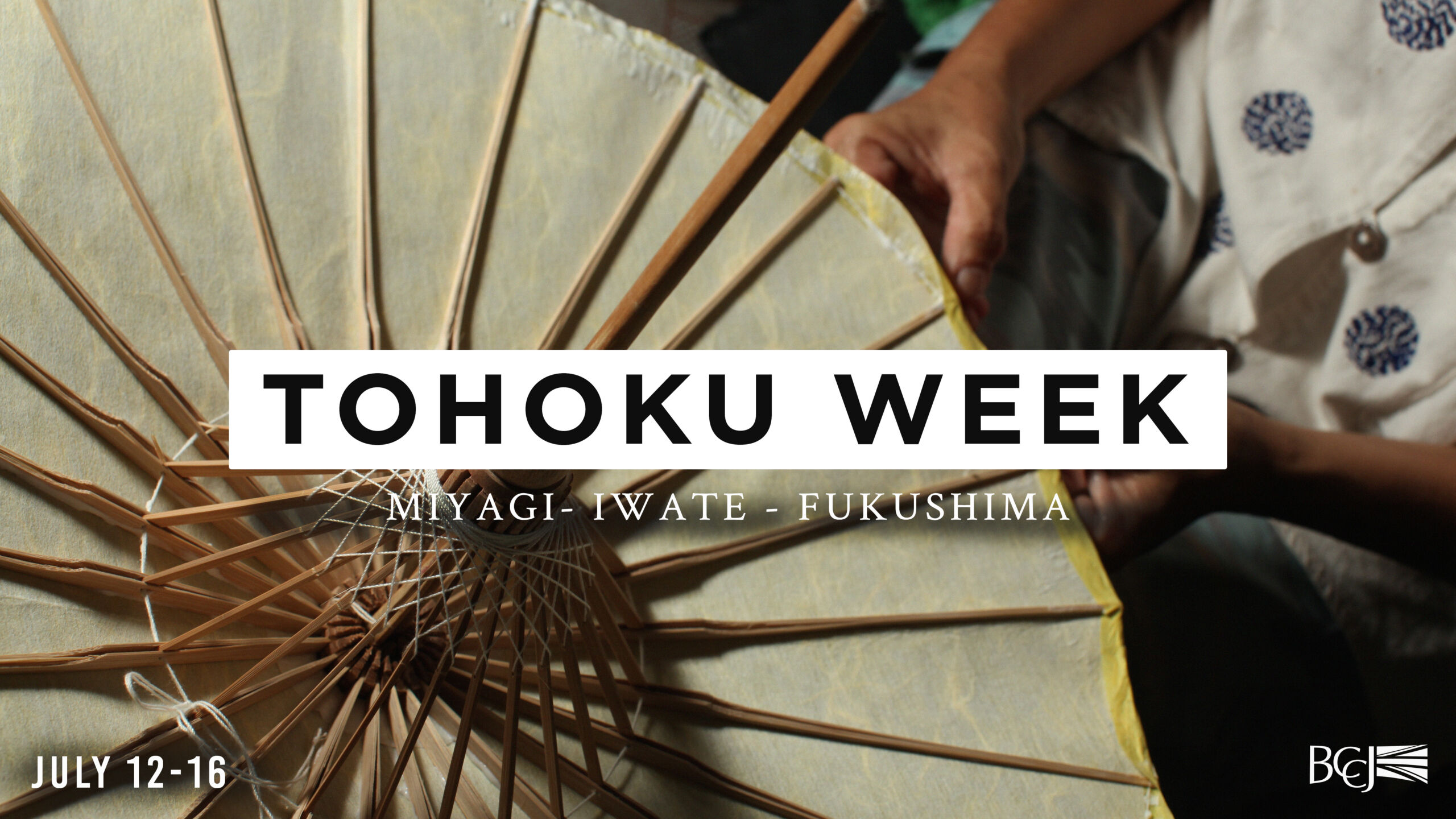 The BCCJ aspired for Tohoku Week to utilise our UK-Japan platform, sharing stories of hope, inspiration and resilience from local people who continue to work hard to rebuild their lives and their local communities. We are glad you could join us on the journey and hope you will consider supporting and investing in the region in the future.

Thank you again for your support.