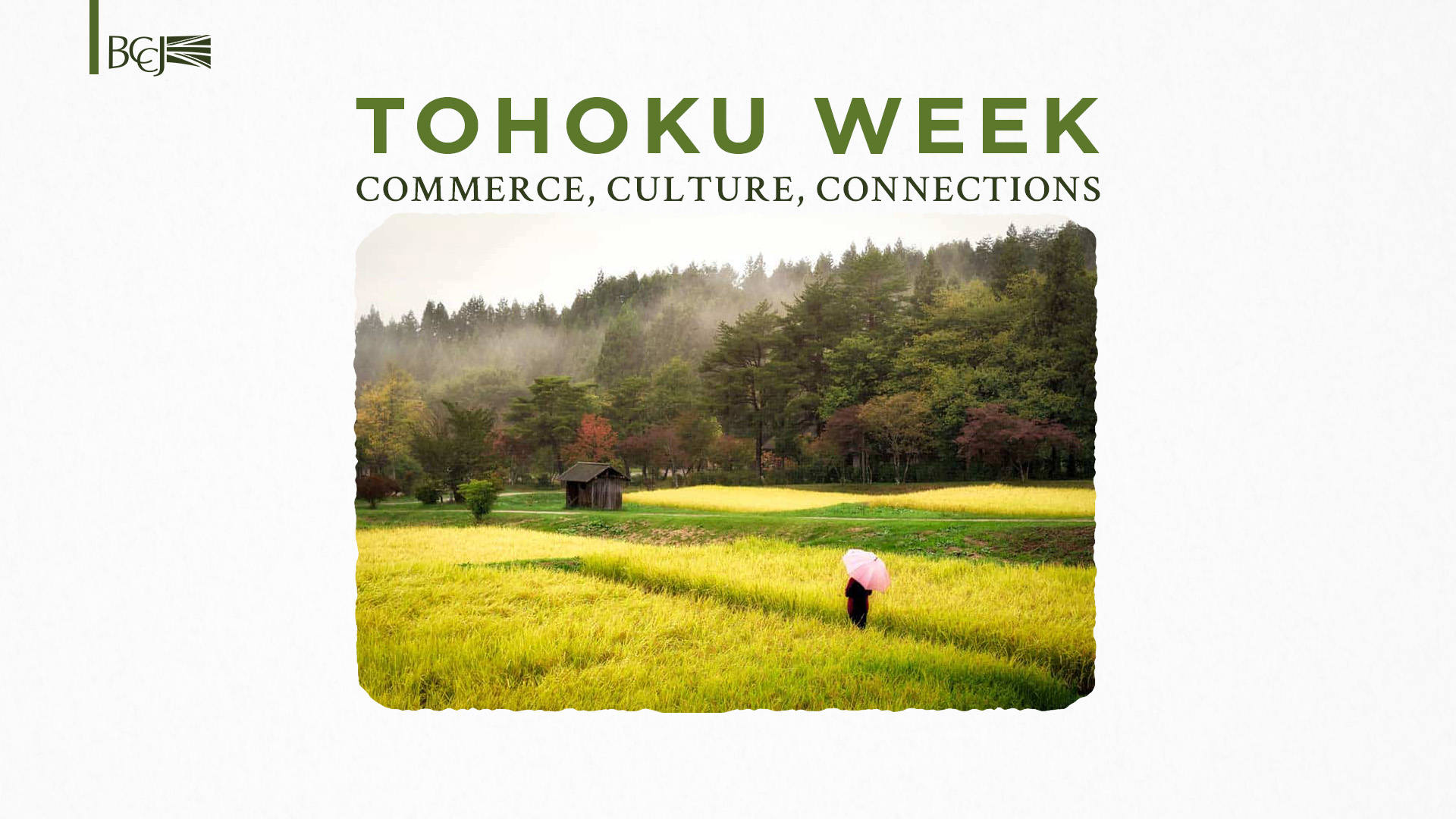 The Great East Japan Earthquake of March 11 2011 showed the devastating power of nature and, in turn, the resilience of the people of Tohoku.

Ten years later, on March 11, 2021, the country came together to mourn more than 15,900 lives lost, 2525 who are still missing, and pay respect to many thousands more who had their livelihoods destroyed. The rebuilding of the East Coast of Tohoku is ongoing.

As the official “reconstruction and revitalisation period” for the area nears its end, the British Chamber of Commerce in Japan (BCCJ) remains committed to supporting friends and colleagues in the affected region, not least those who we met through the BCCJ Back To Business (B2B) Initiative (launched in 2011).

Today, we are proud to launch Tohoku Week (July 12-16), which will highlight local businesses and tourism in the three prefectures most acutely affected by the events of 2011 – Miyagi, Iwate, and Fukushima.

Throughout the week we will present simple ways for you to connect with and directly support Tohoku businesses remotely, while COVID restrictions remain in place.

Above all, the BCCJ aspires for Tohoku Week to utilise our UK-Japan platform, sharing stories of hope, inspiration and resilience from local people who continue to work hard to rebuild their lives and their local communities.

The Tohoku region of Japan (東北地方, Tōhoku Chihō, literally “North East Region”) consists of six prefectures: Aomori, Akita, Iwate, Miyagi, Fukushima and Yamagata. Situated in the northern part of the main island of Honshu, Tohoku occupies nearly one-fifth of Japan’s total area but contains less than one-tenth of the country’s total population. The seven prefectures have a total area of about 80,000 km² and a total population of around 12 million.

The Tohoku economy depends chiefly on agriculture and the region is said to be “the rice basket of Japan”, producing around 20% of the country’s rice in total. During the 1950s, dams were constructed in the mountains of Tōhoku to form a hydropower-generation area. Primary industries these days include forestry, mining, farming and fishing. The region is known for producing traditional items such as lacquerware, iron and copper utensils, toys, and textiles.

Over recent years, tourism has become a major economic driver for Tohoku, however this trend has reversed largely due to a series of natural disasters in the area, as well as COVID-19.

Megumi Hikichi, founder of WATALIS organisation, a recipient of the BCCJ’s B2B fund writes “The BCCJ has inspired us to work with hope in our hearts . . . I hope one day to welcome you to our town as tourists”.

The Four Seasons of Tohoku

In 2021, the Times Higher Education’s (THE) annual University Rankings named Tohoku University the “best university in Japan” for the second year in a row.

THE, which compiles performance data on top institutions around the world, highlighted Tohoku University’s emphasis on global education, and the growing number of international faculty, students and research collaborations. THE also considered “engagement measures,” such as student engagement, and how well employers view graduating students.

Founded in 1907, Tohoku University is the third imperial university, and has an extremely strong science faculty. The University has since contributed immensely to education and research in Japan. The alumni include the Nobel Prize winner Koichi Tanaka. Out of 17,000 students, 1,500 are international students coming from 90 different countries.

Tohoku University has consistently placed in the top three of THE’s Japan University Rankings. As of 2021, Tokyo Institute of Technology and the University of Tokyo are ranked number two and three respectively. On site at the university yesterday, Toshiya Ueki – Executive Vice President (right), Tohoku University and Matthew Knowles, Director at the British Council Japan (left) discussed the core values that have shaped the university’s prestigious history; placing a primary focus on exceptional standards on equality and open access, and on the application of research. The university website showcases ground-breaking work on treating dementia and type two diabetes. http://www.tohoku.ac.jp/en/

Local tourism bureaus supported by the Japan National Tourism Organisation (JNTO) have branched out and found creative ways to show off the beautiful scenery on offer across the Tohoku region.

Today we sign off with Tohoku through the eyes of British adventurer, author and motivational speaker, Alastair Humphreys.

Learn more about Tohoku with the BCCJ, guided by local voices from the region.

We hope you will join our journey throughout Tohoku Week, and do please get in touch with any connections you might have to stories, people, or businesses from the region, for us to include in communications going forward.