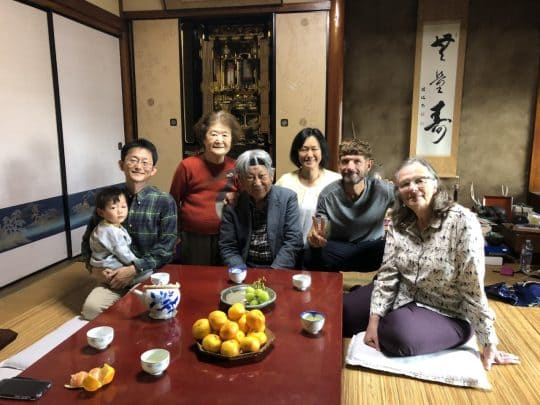 British anthropologist Joy Hendry has released a documentary charting her research on a village in rural Japan over the past 45 years.

Entitled “Understanding Japanese Culture: 45 years researching a village in rural Japan,” the film explores change in Kurotsuchi, in Fukuoka Prefecture. With a small, yet close-kit population that works largely in local green tea and honey production, the settlement is like many others in rural Japan, providing rare insights into how life in Japan has been changing in recent decades.

Hendry, professor emerita of social anthropology at Oxford Brookes University and co-founder of the Japan Anthropology Workshop and the Europe Japan Research Centre, began the study as a student, in 1975, and completed it on her retirement, in 2019. Throughout her career, the expert in Japanese studies added to the study, making it a valuable record.

Hendry spent a year in Kurotsuchi while writing her doctoral thesis. During that time, she created extensive maps, each detailing a single element of the village, such as housing, public facilities, neighbourhoods, community responsibilities. She recorded the family trees of each of the 54 households as well as people’s occupations and general activities.

Central to her research was also getting involved in as many aspects of daily life as possible. She chatted with people to learn more about them and their families, and attended seasonal festivals as well as life events, like marriages.

Over the years, she returned again and again to Kurotsuchi, using her accumulated knowledge and insight to update her records each time.

Recalling her time doing research in the village, Hendry said residents showed “generosity of spirit” by supporting her efforts.

“None of my research could have been done without the kind cooperation of many, many Japanese individuals who were not only willing to consider questions I might put to them, but also to allow me rather freely to take part in their lives,” she said. “People even seemed happy to invite me into their homes, to share their lives, at work and at play, at life crises and other ritual occasions, and even in intimate situations, such as sharing the public bath.”

In autumn 2019, Hendry used a small grant from the Daiwa Anglo–Japanese Foundation to return to the village, where she handed over the materials she had collected and compiled over the past 45 years. The highlight of the visit was a formal handing over of the village-wide family-tree chart to officials who had been active members of the local youth group when Hendry had lived there.

The trip marked the culmination of a remarkable career shining a spotlight on Japan. Hendry has served as visiting scholar at The University of Tokyo and Keio University, and carried out extensive fieldwork in Fukuoka and Chiba prefectures. Her work on Japan has been published widely and she has travelled extensively—both in Japan and worldwide—to help put her Japanese research into a global context.

In 2017, she was bestowed the Order of the Rising Sun, Gold Rays with Rosette in recognition of her outstanding contribution to the promotion of Japanese studies in the UK and deeper mutual understanding between the two countries.