A British silversmith has been recognised at the 2020 Goldsmiths’ Craft & Design Awards for designing and creating a vase that fuses the best of Japanese and British craftsmanship.

Inspired by the Northern Lights and entitled “Dance in the Night Sky,” the piece was made using traditional Japanese techniques learned and perfected by Devon-based Wayne Meeten as part of his 22-year love affair with Japan.

From concept to completion, the vase was four years in the making. Meeten first made the body from shakudo (a gold–copper alloy). In year two, he brought it to Japan to shape it using Japanese chasing hammers, which are smaller, lighter and longer than European hammers. He spent the final two years painstakingly inlaying 7,777 18-carat green gold and fine silver dots, each ranging from 0.3–0.9 millimetres in diameter.

By unanimous vote, he was presented with The Gold Award and The Premier Goldsmiths’ Company Award, in March. His vase was praised for its originality and skilful execution and is now on display at the Birmingham Assay Office, a renowned institute founded in 1773 to test and hallmark precious metal items.

For Meeten, the accolade is the culmination of years of dedicated study and work, both in Japan—courtesy of the Queen Elizabeth Scholarship Trust—and in his home studio.

“It’s even better than what I imagined it would be,” he said of the vase, adding that he is very “touched and honoured” to be been recognised with the award.

He is also full of gratitude and praise for the metalworking community in Japan for helping him with both the vase and his professional development. Since first being taught by expert metalsmith and Living National Treasure Norio Tamagawa in 1998, Meeten has flourished as an artist and designer to become welcomed into the highest Japanese artistic circles—as a pupil, peer and teacher. 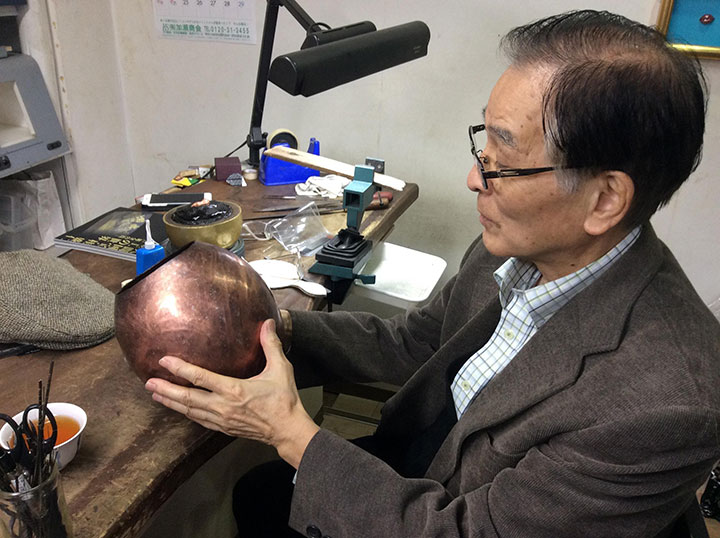 After learning the basics of silversmithing while travelling through the UK, Canada and Asia in his early twenties, Meeten enrolled in Sir John Cass School of Art (now part of London Metropolitan University), where he read a book on Japanese metalwork techniques.

His interest piqued, he began studying the technique of mokume-gane (wood-grain metal), but with little success. When a visiting professor suggested he learn it in Japan, he applied to Tokyo University of the Arts, becoming the first Westerner to learn under late professor Hirotoshi Itoh, an expert in the field.

The Japanese approach was a culture shock. Meeten was asked to craft his own tools and become self-sufficient by learning all the techniques required to make a piece, but he persevered.  Soon, he was successfully doing mokume-gane and other highly skilled work.

Over the years, he continued to visit Japan for extended periods to learn from some of the most respected craftsmen. On returning home, he blended the new techniques into his work.

His unique style has won him international renown and extensive commissions, with his work exhibited across the UK and presented in various magazines. He has also been showcased in the book A Celebration of British Craftsmanship.

Through his efforts, Meeten is promoting not only British silversmithing, but also Japanese silversmithing. Experts agree that his work acts as a cultural bridge.

“Over my many years as a dealer, I have marvelled at the exacting techniques and rigorous training necessary to achieve the extraordinary beauty of contemporary Japanese artworks. To find a Westerner prepared to go through this discipline, and then be accepted within the highest Japanese artistic circles is exceptional,” said London-based contemporary Japanese art expert Katie Jones. Meeten’s “stunning, timeless sculptural pieces,” she added, “transcend any traditional limitations of Japanese techniques.”

With such passion for Japan, Meeten is determined to continue his approach of coming to Japan to learn and spend time in the metalworking community.

“Japan nourishes and replenishes me with energy—it’s like food,” he said. “I have such an affinity with the country that I think I will always have a connection to it. And, after everything I’ve had from Japan, I want to give something back, too.”

Later this year, Meeten plans to return to Japan for the second in a series of lectures at Nagaoka Institute of Design in Niigata Prefecture. His first lecture proved a huge hit because he focused on advising the students how to make their work original.

“In Japan, students are so focused on technique that they don’t have the freedom to be expressive. Only two of the 40 young people in the room said they feel like they are one of a kind,” he said. “I told them that we are all unique—just think of our DNA and our fingerprints—and that they can show their uniqueness in their work.”

Meeten hopes that he can offer fresh thinking to young people entering the metalwork field in Japan while helping “to move contemporary silver in a new way” in the UK.

Another priority is continuing to refine new techniques and add them to his portfolio of skills.

“I’ll never stop learning. There are always designs that can incorporate new techniques, so I want to keep growing,” he said. “In England I learned diamond mounting, setting, repairing, stamping, pressing and engraving. In Japan, I learned mokume, inlay and how to work with shakudo. My work is always evolving—that’s the great thing about it.”

Meeten is currently thinking of ideas for a new piece, which will again be a combination of Japanese and British metalwork styles. 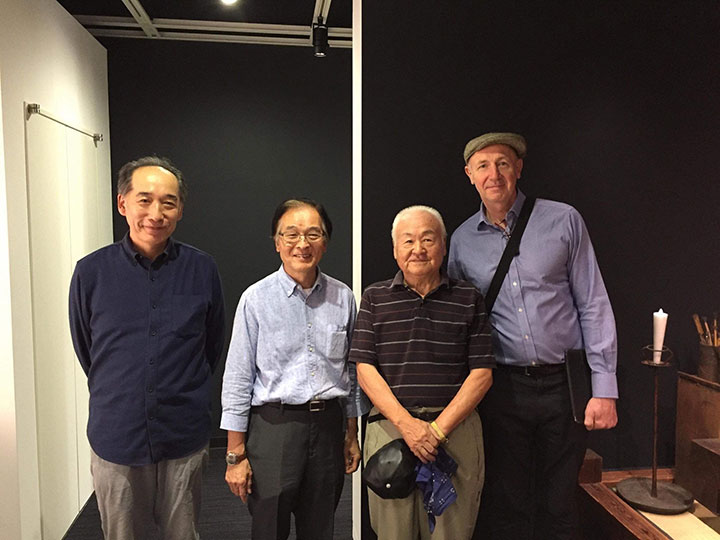