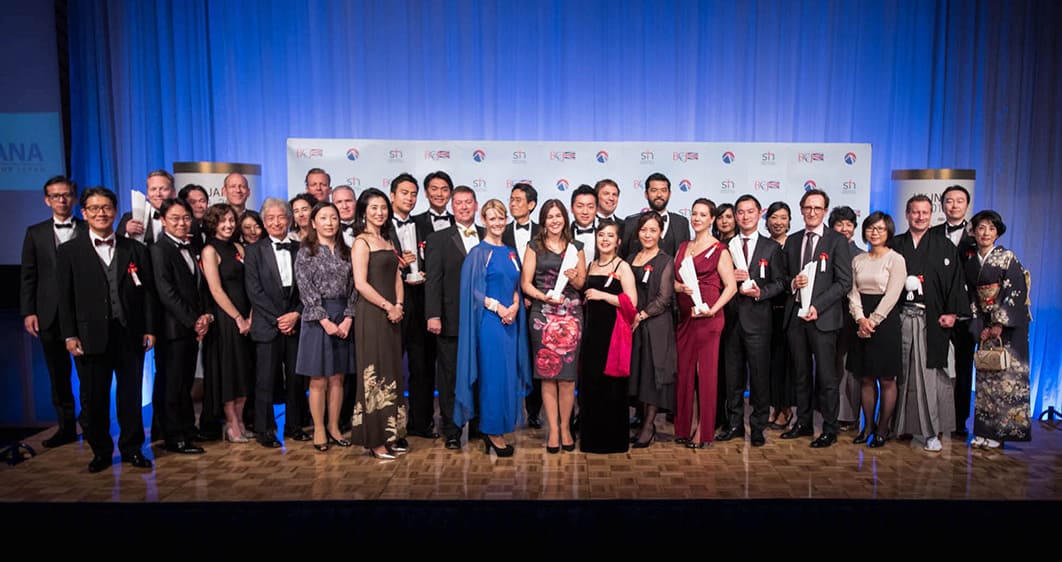 Organised by the British Chamber of Commerce in Japan (BCCJ), with winners chosen by a panel of six independent judges from backgrounds spanning business, sports, trade, government, media, and the not-for-profit sector, the BBA has become one of the largest annual events enjoyed by the foreign business community in Japan.

Established in 2008 to mark the 60th anniversary of the BCCJ, the event is now considered a unique showcase for British creativity, culture and commerce.

Company of the Year:

2019 is a milestone year for AstraZeneca in Japan (AZ). By pushing the boundaries of science, the UK-based firm delivered 4 new innovative treatments that meet unmet medical needs in Japan. This achievement helped AZ become the fastest growing pharmaceutical company in Japan. To couple this business growth with social progress, the company also introduced and is implementing a Sustainability Strategy.

Entrepreneur of the Year:

In 2012, Japanese-Scottish couple, Nori and Rachel, had a vision of an international community committed to work-life balance, diversity, gender equality and entrepreneurialism, promoting village-style interaction. Today, Ryozan Park is Tokyo’s only company offering integrated accommodation, offices and childcare, which the owners describe as “an oasis in the corporate jungle”.

Barclays Securities Japan Limited has been working to address and raise awareness of some of the pressing environmental and social issues facing Japan such as global warming, sea contamination, food loss and waste. They are achieving positive impact through business initiatives such as working with local financial institutions, leveraging their capability as one of the UK’s most recognisable global banks.

Over the past 18 months, EY Japan has successful launched and run an innovation and emerging technology center called wavespace. wavespace has had a huge impact on Japanese and international organisations having run over 250 innovation and transformation workshops, generating new ideas, creating new technologies, and achieving meaningful business transformation.

The black-tie event was supported by an impressive range of BCCJ member companies and friends, with STH, official hospitality providers to the Rugby World Cup 2019, contributing as the Headline Sponsor.

A pop-up bar by Gold Sponsors Wimbledon Brewery featured award-winning craft beers, including “Pitbull” named after British sporting legend Brian Moore. The Brewery was re-established in 2014, 125 years after the original brewery burned down.

BCCJ President David Bickle welcomed guests with an opening ‘kanpai’ and offered a reflection on trust in the bilateral relationship.

Throughout the evening, guests were offered the chance to win a fabulous array of over 80 prizes including return flights from Tokyo to London, courtesy of British Airways, an overnight stay on a luxury yacht cruising around Sagumi Bay, an all-expenses trip to Kagoshima’s Sengen-an, as well as 11 overnight stays at luxury venues across Japan.

Tacticart opened the event with classical strings, and the Fabulous Sisters, finalists in 2019 Britain’s Got Talent energised the crowd with a stunning dance performance. A sumptuous six-course UK-Japan fusion dinner followed, with matching wines from the UK’s oldest wines and spirits merchants, Berry Bros. and Rudd.

Glenmorangie Ambassador Randall McConachy provided a lively introduction to the ‘backbone’ of the range, The Original, a bottle of which had been generously placed on each of the 31 tables.

Other entertainment included a video text message exchange with ‘HRH The Queen’ and a round of British party games.

Whatsapp video – a conversation with the Queen (and Boris)

The 2019 BBA attracted 32 nominations across five award categories. Nominees came from global corporations, SMEs, and entrepreneurs across a number of traditional and modern industries – including cyber, sports, finance, legal services and media.

Prior to the awards announcements, the Ambassador gave entertaining opening remarks touching on business, politics and pop culture.

Teams from over 100 companies were involved with delivering this year’s gala – making it a superlative community event.

Sincere thanks to the 2019 BBA sponsors, without whom the BCCJ’s twelvth black-tie event would not have been possible:

The gala, celebrating the concept of “5.0”, the fifth stage of human evolution, was brought to you in partnership with UK in JAPAN 2019-20.

A sincere thank you to all teams who contributed to the delivery of a very successful British Business Awards, and banquet staff at the Gajoen Tokyo.

From the Hot Seat: 2019 Judges share insights on BBA