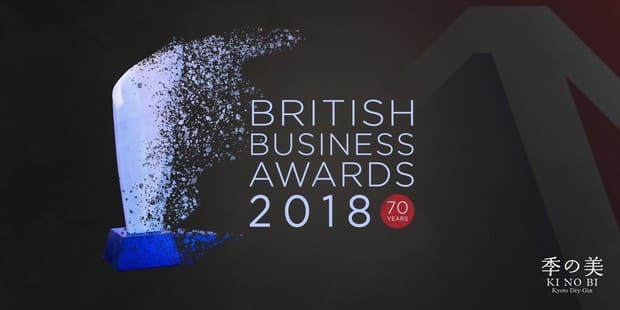 70th anniversary of the British Chamber of Commerce in Japan

Organised by the British Chamber of Commerce in Japan (BCCJ), with winners chosen by a panel of six independent judges from backgrounds spanning trade, sport, law, government and business, the BBA has become one of the largest annual events enjoyed by the foreign business community in Japan. Established in 2008 to mark the 60th anniversary of the BCCJ, the event is now considered a unique showcase for British creativity, culture and commerce.

Company of the Year: AstraZeneca K.K.

2018 is a milestone year for AstraZeneca in Japan. By pushing the boundaries of science, they have delivered a record seven new treatments to market. These have provided doctors with revolutionary treatments for diseases including cancers, asthma, and acid reflux, as well as offering genetic tests for patients which ensure the best medicines are prescribed for patient DNA. For patients, every day counts. Driven by this understanding AstraZeneca K.K has also ensured access to these life-changing medicines for Japanese patients in record time.

Noriko has been working on revolutionising the interior design world in Japan by introducing the dynamism of the British model (BIID standard) which treats interior design as a distinct profession, covering elements such as architecture, interior design, art direction, and finishing touches. BABID bridges the skills gaps between traditional Japanese architects and international interior coordinators. Through education and community, the firm is creating exciting new Japanese design and property markets, including developments in Zushi and Atami, and a British bakery ‘Whimsy’ in Tokyo.

ESR is a leading provider of logistics funding and managing, and is well-known for establishing state-of-the-art distribution centres in Japan. The company’s community initiatives include a commitment to enhancing the workplace environment, and bringing women back to work. The team is dedicated to changing the perception of what people think of as a warehouse, by anticipating and adapting to customers’ and employees’ changing needs. They provide new solutions through sustainability and green energy initiatives, driven by “Human Centric Design”. This means building high-quality ammenities for the staff and local community, such as areas for recreation, rest, and free childcare, including Barnklubb daycare centres and KLUBBLOUNGE, established in the past year.

Japan House London opened on Kensington High Street on 22 June 2018 and has quickly established itself as the new cultural home of Japan in London. A key objective is to build lasting partnerships between Japan and the UK; the development of a Corporate Members scheme – which has attracted 34 member companies, 32 of which are from Japan’s private sector – has proved instrumental in meeting this objective.

GSK K.K., along with its sister companies ViiV and GSK Consumer Healthcare, has created an inclusive workplace to attract and retain the most talented people from all backgrounds and cultures. In Japan, they have focused on building a vibrant organisation where all employees feel inspired, engaged and valued for their respective contributions. As well as supporting women in the workforce, the company has fostered an environment which welcomes different knowledge, perspectives, experiences and working styles.

For the eleventh consecutive year, the event was supported by an impressive range of BCCJ member companies and friends, with KI NO BI led by former BBA winner, David Croll, contributing as the headline sponsor. In 2012 Croll lifted the BBA trophy for Entrepreneur of the Year for Whisk-e, a venture he set up with his wife Noriko in 2000.

BCCJ President David Bickle welcomed guests with an opening ‘kanpai’ and offered a reflection on the bilateral relationship. “Through scientific and technological innovation, socially responsible policies and initiatives, and a commitment to diversity and inclusion, British and Japanese businesses are making profoundly important reciprocal contributions to sustainable economic growth in the UK and Japan. He went on, “The quality of nominations for the 2018 British Business Awards reflects the depth and breadth of such activity, and highlights the tremendous achievements that are possible from collaboration between our two countries.”

Throughout the evening, all guests were offered the chance to win a fabulous array of over 70 door-prizes including return flights from Tokyo to London, courtesy of British Airways, as well as 14 overnight stays at luxury venues across Japan.

Supporting this segment and performing a roving fashion show throughout the evening were members of British Airways International Cabin Crew, wearing historical uniforms flown in especially from the BA Heritage Centre, to celebrate 70 years of the airline flying from the UK to Japan.

Prior to the awards announcements, the Ambassador gave entertaining opening remarks touching on business, politics and pop culture. He praised British innovation and diversity, and said, “I am particularly pleased to be here as the chamber celebrates its 70th anniversary. This has been a very busy year in Britain-Japan relations,” he said, adding that UK goods exports to Japan had increased by some 22 percent in the financial year 2017-18. With the 2018 BBA happening exactly one year and one day before the final of the Rugby World Cup 2019 is to be played in Yokohama Madden expressed hope that Japan might be in the final, playing one of the British teams. He also suggested that Japan’s Prime Minister Shinzo Abe will visit London before the end of this year.

BCCJ Executive Director Lori Henderson MBE said, “The BBA is the one night of the year where we all come together under one roof to celebrate great partnerships.
Teams from over 100 companies have been involved with delivering this year’s gala – making it a superlative community event. The UK-Japan relationship really is alive and kicking”.

The 2018 BBA attracted 33 nominations across five award categories. Nominees came from global corporations, SMEs, and entrepreneurs across a number of traditional and modern industries – including cyber, sports, legal services and media.

The gala event became the largest in the not-for-profit organisation’s 70 year history.

Sincere thanks to the 2018 BBA sponsors, without whom the BCCJ’s 70th anniversary black-tie event would not be possible:

A sincere thank you to all teams who contributed to the delivery of a very successful 70th anniversary British Business Awards, and in particular Steve Dewire and his team at the Grand Hyatt Tokyo.