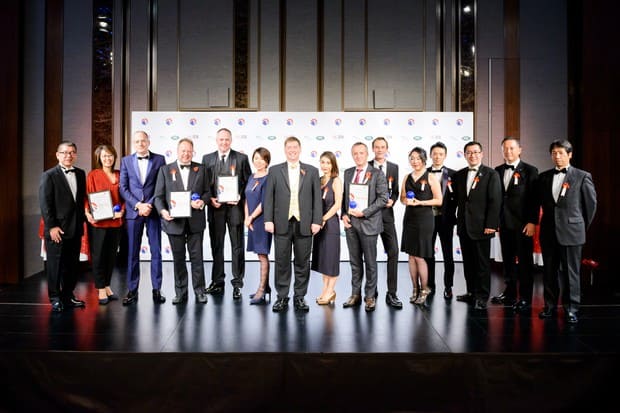 British innovation, entrepreneurship, business success and social contributions in Japan were recognised last night at a gala event at the Grand Hyatt Tokyo, attended by over 350 guests.

Organised by the British Chamber of Commerce in Japan (BCCJ), with winners chosen by a panel of five independent judges from backgrounds spanning trade, sport, law, government and architecture, the British Business Awards (BBA) has become one of the largest annual events enjoyed by the foreign business community in Japan. Established in 2008 to mark the 60th anniversary of the BCCJ, the event is now considered a unique showcase for British creativity, culture and commerce.

For the tenth consecutive year, the event was supported by an impressive range of BCCJ member companies and friends, with Jaguar Land Rover Japan once again contributing as the headline sponsor.

British saxofonist, Marcus Pittman, and the rock band The Conductors delivered the best of British entertainment with popular hits from David Bowie and other British artists. The British School in Tokyo Jazz Band opened the event with two sets of classic jazz.

BCCJ President David Bickle welcomed guests with an opening ‘kanpai’ which included a note of congratulations to British author Kazuo Ishiguro who won the Nobel prize for literature earlier this year.

Throughout the evening, all guests were offered the chance to win a fabulous array of door-prizes including return flights from Tokyo to London, courtesy of British Airways, as well as the title Best Dressed Man or Best Dressed Woman, courtesy of Dunhill.

Addressing the guests prior to the awards announcement, the Ambassador said, “You only have to look at the list of nominees to really appreciate both the diversity and the quality of the British presence here in Japan.” Madden also offered a reflection on bilateral ties in the nine months since he took his current post. Prime Minister May and Prime Minister Shinzo Abe “moved the relationship on to the next level” by discussing both security and economic issues during May’s visit to Japan from August to September, the ambassador said.

Company of the Year: Aston Martin

To recognise Aston Martin Lagonda for driving trade and investment between the UK and Japan in its latest deal, announced August 2017 and worth up to £500 million over the next five years. The deal will support British manufacturing, the Japanese supply chain, as well as the development of the Aston Martin brand in Japan.

Dr Andy Palmer, CEO of Aston Martin says: “On behalf of all the family at Aston Martin, I’m delighted to receive this prestigious award from the BCCJ, in recognition of what has been a fantastic year for us.  In the Japanese market, my second home, we are set for our best year on record in terms of sales, having just launched our new Tokyo dealership on Aoyama dori.  Further fruits of our significant investment, into what is the world’s second largest luxury market, will be realised on 21st November with the opening of the House of Aston Martin – Aoyama; a new brand experience centre.  My team in Japan are grateful to the BCCJ for all the vital support that they provide to expanding the business of the British community in Japan”.

Entrepreneur of the Year: Ian Gibbins (Swan and Lion)

Gibbins says, “At Swan & Lion our focus is to make great tasting modern British food that represents the huge overhaul in British cuisine in recent years. I am passionate about being all natural and using seasonal produce. I want to show my Japanese customers that British food is not just fish and chips!”

Later, Gibbins added “A huge thank you to my team, Head Chef Luke, Steve and Miaki. And my hard working events team led by Endy. And most of all to my amazing wife, Kio”.

STH Japan is a pioneering partnership between JTB Corporation and the multi award-winning Sports Travel & Hospitality Group. It will introduce top-class hospitality experiences for international and domestic sports events in Japan, with a particular focus on the 2019 Rugby World Cup.

To recognise Unilever for its initiatives to operate a sustainable business and, through “WAA” and “Women Empowerment” programmes, to catalyse a big social movement and change corporate culture in Japan.

In recognition of SciBite’s transformation of data management in the life sciences and the opportunity this brings for Japan to gain a global advantage in this sphere. Our technology is revolutionising Research and Development for pharmaceutical companies – a major contribution for a small, British company in a highly competitive market.

Sincere thanks to the 2017 BBA sponsors, without whom the BCCJ’s 10th annual, black-tie event would not be possible:

Thank you to all teams who contributed to the delivery of a very successful10th anniversary British Business Awards!