Only one year after EY Japan’s launch of innovation and emerging technology centre wavespace, its team accepted the 2019 British Business Award for innovation.

The feat was both a delight and surprise, according to wavespace Tokyo Leader Helen Bentley, especially as the firm’s mainstay has long been auditing. What began as a market test for EY Japan’s foray into digital consulting had not only achieved success in its first 12 months of operations, it had also scooped a coveted gong at the BCCJ’s headliner event. The recognition, says Bentley, has proved invaluable as EY Japan eyes development of venue, staff and capabilities for wavespace in 2020.

Within the next few months, wavespace will expand into an additional venue at EY Japan’s Hibiya offices and boost its team. As well as new hires with expertise in data analytics, AI and cyber security, staff from EY’s US offices will be seconded to help build wavespace Tokyo’s digital skills.

The moves are all part of a phased approach to the centre’s long-term development, put in place thanks to the successful delivery of more than 280 innovation and transformation workshops for Japanese and international organizations.

“Our proof of concept was hugely successful. At our first anniversary point (December 3, 2019), we’d expanded to double the size of our current venture—in prime real estate—which is a great achievement,” said Bentley. “We’ve got incredible client feedback from every industry. Everyone loves wavespace and can’t get enough of it.”

With increasing offers of collaboration worldwide, Bentley and her team are preparing to deliver workshops and training overseas this year. They will also create transformational workshops that will be copied for centres in the US and Europe, a boon to the team as material is created typically by EY US and copied for other markets. Expansion is also planned into information consultancy.

“It shows our reputation as an innovation centre. People thought we’d be learning from other centres as we’re smaller, but it’s a two-way stream of learning between us and bigger centres,” she said. 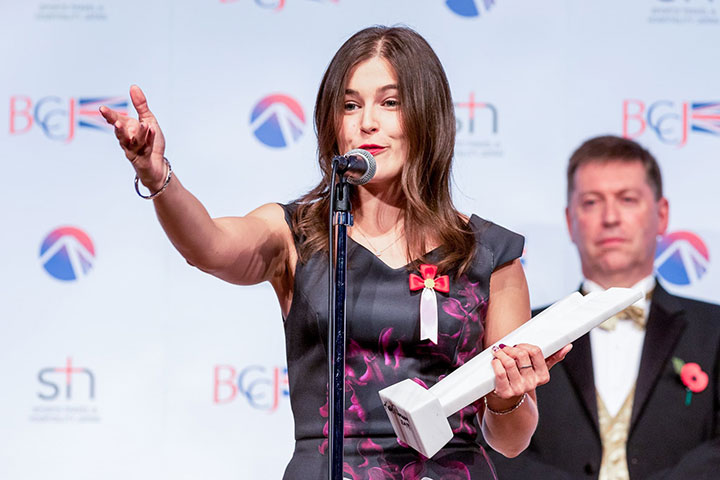 Wavespace Tokyo is one of 22 wavespace flagships globally, including London, Paris, Tel Aviv and Singapore. Each wavespace is a centre of excellence for one of more digital capabilities, such as IoT, AI, user experience, blockchain, data analytics or cybersecurity.

When the Japan centre was launched, it was one of the smallest, so it focused on transformational workshops rather than areas like data analytics, which require a lot of human resources.

To innovate effectively as a business, Bentley advocates direct support from senior staff, an innovative and creative team, and buy-in from every part of the firm.

EY Japan, she says, recognized the value of innovation in the long term and secured a small financial investment in wavespace from every part of its business, thus ensuring everyone was on board.

“An innovation lab is not set up to make a huge profit. It’s looking to find new, niche ideas to structure them with investment and support them to grow into something that might make money in 5–10 years,” she said.

Creating an investment funnel has also proved important to wavespace, to ensure that ideas floated in workshops don’t get forgotten. Staff use technology to move ideas to the proof-of-concept stage, from where a decision is needed on whether the idea requires investment or should be abandoned.

Using this method, EY Japan has created new technologies that are being rolled out globally, including a transaction detector tool that leverages AI to reduce risk, a cyberattack stimulation app to test response to cyberthreat and a range of chatbots for customer experience and training programmes. During the 2019 Rugby World Cup, the firm also developed a digital experience leveraging VR, motion sensors and projection mapping.

Ultimately though, the key to successful innovation in business is the team, according to Bentley.

“You need the right balance—innovative and creative people who can have a startup mentality and then incorporate into a large organisation,” she said.

With wavespace Tokyo expanding this year, EY Japan’s human resources will be increasingly important for its success and Bentley is confident that the team is ready and capable.

After scooping a BBA, everyone is thrilled with the recognition and eager to push the boundaries of innovation at wavespace in 2020 and beyond.