AstraZeneca Japan (AZKK) is starting 2020 on a high. Not only was it awarded the fiercely contested 2019 Company of the Year trophy at the BCCJ’s British Business Awards (BBA) in November, it also became the first firm to scoop the accolade two years in a row.

Describing 2019 as “an incredibly busy and rewarding year” for AZKK, Stefan Woxström, president and representative director, said staff are very encouraged by the achievement.

“It’s such a nice award to win because the competition is really good. To win once you could do, but to win for a second year you need to do something extraordinary. It’s a fantastic recognition of what we do,” he said. “Everyone in the company knows about the award and feels really proud because each person contributed to achieving it.”

In 2019, AZKK became the fastest growing pharmaceutical firm in Japan, moving up the ranks to fifth according to size. It launched AZ 2025, a strategy designed to boost access to healthcare and protection of the environment through an innovative, people-driven approach and corporate unity.

Fundamental to AZ 2025 are efforts to focus on the patient journey, from disease awareness to cure or improvement of life. According to Woxström, this approach is how AZKK differentiates itself from competitors, which remain focused on medicines.

“We need to focus on the whole ecosystem around the patient to make the patient healthier. It’s not enough simply to provide treatment. We need to see if we can help prevent the disease from happening,” he said.

As Japan embraces Society 5.0, the new Super Smart Society that will shift from the standardised care of Society 4.0 to personalised care, Woxström says the patient ecosystem will become increasingly relevant, and AZKK is ready to contribute.

Last year, the firm collaborated with the Osaka government to tackle allergic diseases. AZKK staff met 350 residents to raise awareness of the diseases before holding peer to peer meetings with physicians, as part of prevention using education.

In 2018, AZKK brought out a new, second-line treatment for ovarian cancer. Following further successful studies, the drug was launched last year as a first-line treatment exclusively to patients with a mutation, thereby allowing earlier and more targeted treatment.

“It’s very rewarding for us because we work very hard to find targeted medicines,” Woxström said of the launch. “We can now treat patients with much better probability of response, and patients don’t have to try treatments that don’t work.”

In the area of chronic obstructive pulmonary disease, which limits patients’ mobility due to loss of breath, AZKK launched two new medicines. Though not a cure, the drugs will help avoid further worsening of the disease.

The firm also brought out a new medicine that might better support patients with Type I diabetes and allow them to take less drugs overall. 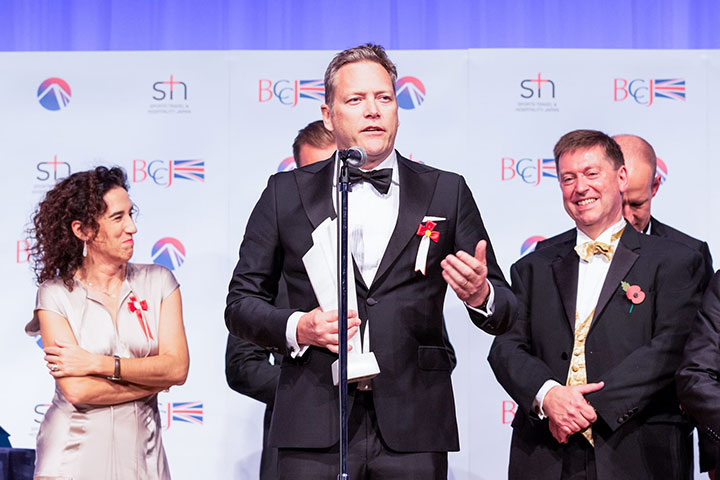 Last year also saw AZKK boost its Zero Yen programme, designed to close the gap in Japan between the timing of a medicine’s regulatory approval and price listing, which is typically three months. As patients in desperate need may not be able to wait, this ethical programme involves collaborating with key clinics in Japan to provide free access to those medicines before price listing.

“On the day of approval, we have clinics contracted to participate. Their staff are trained, know the products and can deliver the drug from day one,” said Woxström.

AZKK is taking steps both inside and out to address the firm’s environmental impact. Of the 1,900 cars owned by the company for use nationwide, 60% were switched to hybrid models in 2019, with the remainder earmarked to be changed this year. Staff are encouraged to print only when necessary, which resulted in a 15% reduction of paper use last year. Following an internal audit, AZKK found its facilities amassed 400,000 plastic bottles per year, largely from drinks given to guests, prompting the firm to switch to glass options.

“We have a war on single-use plastic; we don’t use it anymore,” said Woxström. “To get staff engaged, we went out as a company to clean beaches, parks and Lake Biwa. They got motivated when they understood how much plastic there is in nature.”

It’s not the first time that AZKK has adopted such a hands-on approach to fostering staff unity. The firm’s 3,300 staff from across Japan attended the launch of AZ 2025 at a sports stadium in Osaka.

“We wanted everyone to understand the strategy, believe in the strategy and see how they contribute to the strategy,” said Woxström. “Everyone gave three ideas of what we can do (within AZ 2025) so we now have a bank of 10,000 fantastic ideas that we are going to use going forward.”

As part of corporate responsibility initiatives, staff are also encouraged to spend eight hours a year supporting worthwhile activities that include charity walks and cleaning houses used by children undergoing cancer treatment and their families.

Aside from helping society, the efforts strengthen the AZKK team. From the representatives in the field to the R&D engineer to the warehouse packer, Woxström says each person plays a vital role It is therefore, thanks to the entire team that AZKK is the recipient of not one, but two prestigious BBA Company of the Year awards.