In November 2019, Ocado Group and Aeon announced the establishment of a partnership designed to revolutionise Japan’s online grocery industry. Now, two years on, the UK online grocer and Japanese retail giant are proudly displaying a British Business Award for their efforts.

The pair received the prestigious trophy in the category of UK–Japan Partnership at the British Chamber of Commerce in Japan’s annual black-tie event, which was held in hybrid format for the first time on November 5. The accolade recognises the vital progress over the past 12 months—in challenging global conditions—of a partnership between two significant Japanese and British businesses.

Reflecting on the win, Clifford Bailey, head of partnerships APAC at Ocado Solutions, said the team is delighted to be recognised in such a competitive field.

“It was a challenging project before COVID, but with COVID stopping people travelling, it’s been extra challenging,” he said. “There is a huge degree of complexity to what you have to do to fulfil grocery online compared to other retail verticals. In a frontier industry that is growing very quickly, we’re making progress with big infrastructure projects and it’s very gratifying to get recognition for that.”

With some 200 years of history, Aeon is one of Japan’s longest established retailers and one of the largest in Asia, with 21,000 shops and 100mn customers. Ocado Group plc, meanwhile, licenses its technology to grocery retailers around the world and is listed on the London Stock Exchange. Both firms have the size, resources and track record to create a successful partnership, and Bailey says they also share a “mutual great ambition” to change the online grocery offering in not just Tokyo or Kanto, but all Japan.

Tim Steiner, CEO of Ocado Group, said the partnership “marks a major milestone for the food retail landscape in Japan,” adding that Aeon is the first retailer from Asia to join “the unique international club of grocers powering their e-commerce operations with Ocado.”

Motoya Okada, chairman of Aeon, said the partnership with Ocado will “create a smooth, seamless digital experience, thereby speeding up our efforts to reform the online customer experience.” He added: “We see Ocado as a state-of-the-art, exciting and transformative partner aligned with our strategy of accelerating Aeon’s digital shift to serve Japan’s consumers.

“We will forge stronger relationships with our customers by offering a more personalised service driven by the capabilities of the Ocado Smart Platform, coupled with Aeon’s capabilities to curate an exciting and compelling product mix centred around serving the lifestyles of our consumers.”

The first CFC, which will be located in Chiba Prefecture’s Honda City and serve the Kanto region, is planned to go live in 2023. By 2025, further CFC capacity will be built, expanding into a national fulfilment network to eventually serve the entire Japanese market. This nationwide network is expected to deliver sales capacity of around ¥600bn by 2030 and ¥1trn by 2035. 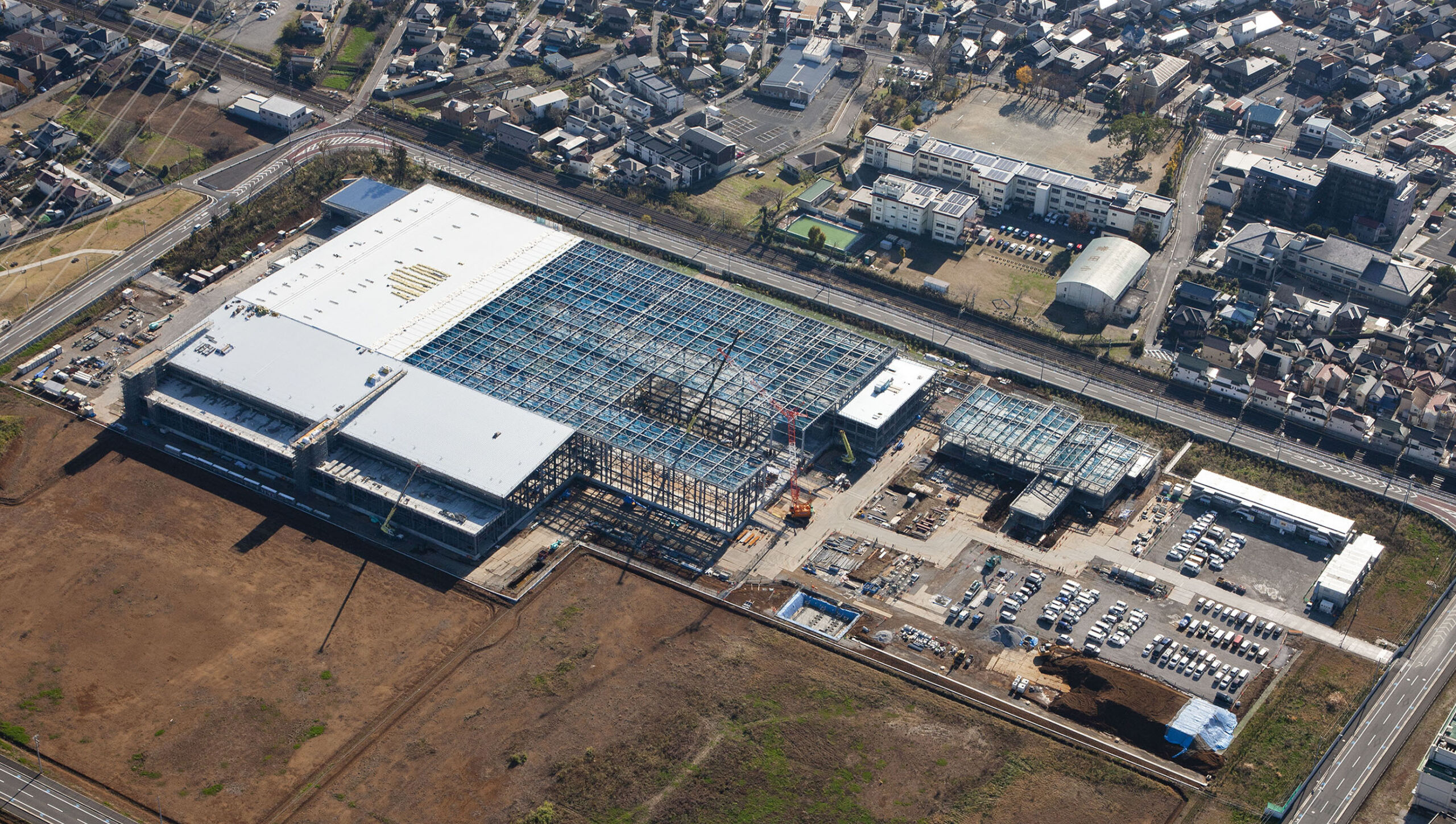 The first months of the project centred around establishing the design of the CFC and securing the project team; Bailey relocated to Japan in August 2020 to work in Ocado Solutions Japan’s offices at Aeon Tower, Chiba Prefecture, after a pandemic-induced travel delay. While some Japan-bound staff are still awaiting departure from the UK, progress has continued apace. The firms broke ground at the Honda site in April 2021 and construction is already half-completed.

Once the shell is finished, which is Aeon’s responsibility, Ocado will move in to work on the interior, installing the machinery and robotics.

“The handover is coming up and we’re keen to get on-site,” said Bailey, adding that a team from Aeon has been touring Ocado’s UK projects, which are at various stages of construction. “For the past year or so, we’ve shown videos and diagrams, but there’s nothing like seeing it first-hand. They’re getting a lot of value from that.”

He predicts that 2022 will be a year of even more significant milestones for the project. As part of Aeon’s efforts to realise its CO2 emission elimination Vision 2050, the CFC will be integrated with a power purchase agreement model whereby solar power is generated onsite and stored in large batteries, allowing it to be used by the facility and sold to electricity consumers. In order to develop technology for general-purpose storage batteries, a proof-of-concept experiment using an AI-based energy support service will be contracted by Aeon and other stakeholders, which would be the first trial in Japan in the field of next-generation online grocery.

Operating as a true partnership in every sense, the Ocado–Aeon project is designed to allow each partner to thrive in their area of expertise.

“We’re all playing to our strengths. We’re bringing the technology; Aeon’s bringing the retail know-how,” said Bailey, adding that Ocado is pleased to be involved in the next stage of Aeon’s evolution.

“The nature of Ocado’s partnership model is that we recognise our strengths; the uniqueness of our business model; the economics behind our logistics, technology and customer service; and the proposition we can bring … Aeon has ambition, know-how and customer loyalty to win online in the long-term. With our partnership with Aeon, we can leverage its phenomenal history and connection to their customers.” 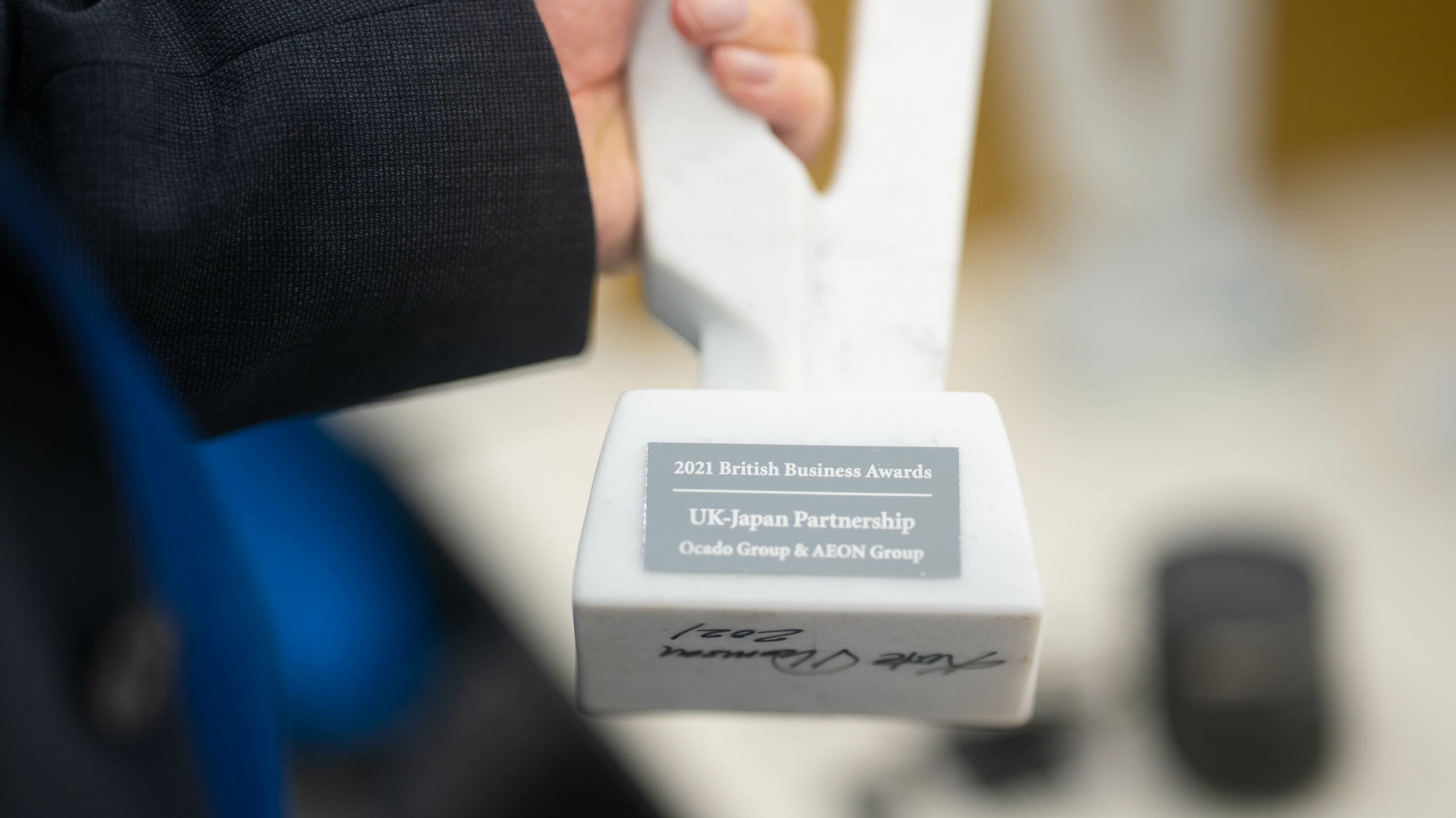