The past 12 months have seen AI and pharma tech firm Exscientia secure some huge wins, from bringing the world’s first AI-designed medicines to clinical trial to completing its initial public offering. Now it can add a British Business Award (BBA) to its successes.

The Oxford-based firm scooped the 2021 Digital Tech and Innovation gong at the British Chamber of Commerce in Japan’s hybrid black-tie event celebrating UK–Japan relations, on November 5. Under the theme “Transform the Norm,” the annual gala’s independent panel of judges from diverse backgrounds and industries awarded organisations in six categories.

Exscientia was recognised for its creation of two of the world’s first three AI-designed drug molecules to enter clinical trials in collaboration with Sumitomo Dainippon Pharmaceutical Co. Ltd., and a successful series D fundraising led by SoftBank that preceded Exscientia going public on Nasdaq in October.

Founded in 2012, Exscientia aims to lead the development of the interface of advanced AI application and complex drug discovery. Its team precision engineers future medicines for patients, driven by a desire to significantly accelerate pre-clinical drug discovery to enable the delivery of new treatments to patients worldwide.

According to Founder and Chief Executive Officer Andrew Hopkins, who has long championed an automated and algorithmic approach to drug design, the firm was born out of his team’s 2012 paper published in multidisciplinary science journal Nature. The research showed that algorithms could be used to design drug molecules with complex profiles.

“We wanted to demonstrate this [finding] in the real world,” he said, adding that Exscientia’s pioneering mission has made it a leader in the field from the outset. “And we’ve maintained that leadership, becoming the first company to publish a clinical trial of the first time machine algorithms have been used to improve outcomes in cancer treatments for patients—that has been a great advance and we continue to lead the field in key advances in AI.”

Exscientia’s team operates by utilising the algorithms of evolutionary computing, the wealth of knowledge available from studies and deep learning technologies to build models that can show how medicines can be designed more efficiently.

The result is that projects can progress faster and be more effective, streamlining developments and driving innovation in the field.

“When we think about design, we are exploring a vast space of possibilities—possible compounds we could make and test—so it’s about how we navigate that space more efficiently than is currently the case. By learning the way in, we can be far more efficient in discovering the key drug molecule of all the billions of possible molecules that you want to take into human clinical trials,” he explained.

Working with Sumitomo Dainippon Pharmaceutical, Exscientia has brought its first two AI-designed drug molecules to clinical trials, the first for symptoms of Alzheimer’s disease and the second for cancer immunotherapy. It’s an important development, said Hopkins, because “it shows the new way of working is starting to demonstrate results.”

In financing, the firm completed Series C in March before securing $225mn (£169mn) only eight weeks later in Series D, led by SoftBank and a number of other key biotech investors. On October 1, it achieved its initial public offering at $510mn (£383mn), the largest raise recorded for any European biotech company.

Following the acquisition of personalised medicine AI pioneer Allcyte, in June, Exscientia completed what Hopkins describes as one of the firm’s “biggest technological advances of the year.” Colleagues at the Vienna-based firm were able to use machine learning technology to analyse the cells of a patient’s cancer to determine which drug would be most effective.

“It’s a promise of real personalised screening,” said Hopkins, adding that the AI can detect the best drug better than a physician ever could. 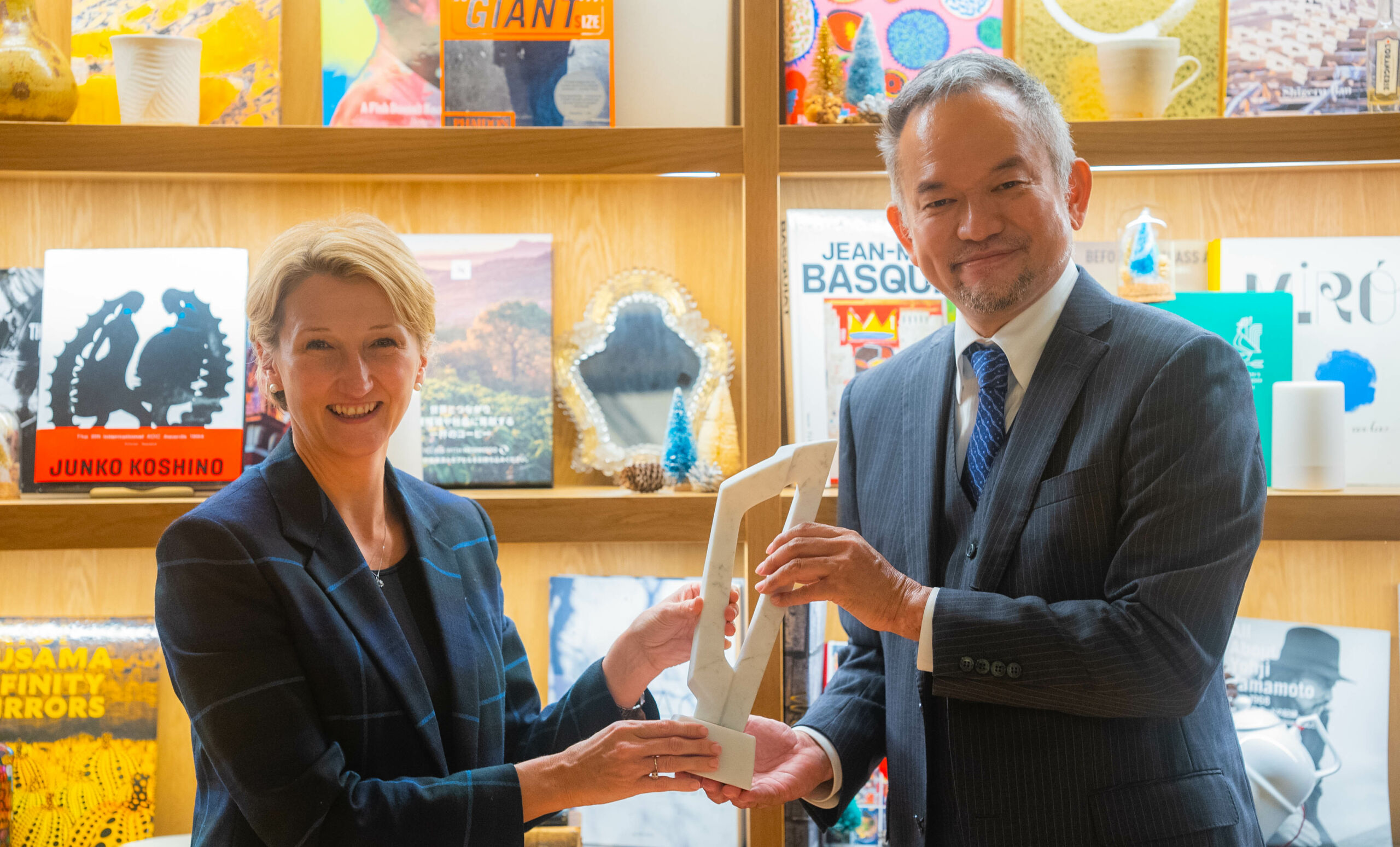 “Japan has always been an important market for Exscientia from the early days of the company. We hope winning this award now allows us to think about how we can further catalyse our relationships with Japanese companies,” he said. “We’re thinking about how we can expand in Japan based on our current successes.”

Daisuke Tanaka, vice president of the Osaka-based Japan office, added: “It’s the greatest honour to receive the award; we’re absolutely delighted. We’d like to continue contributing to the Japanese health care segment and society, which would lead to the enrichment of the relationship between the UK and Japan.”

Exscientia will also continue “putting the patient first in how it uses AI in healthcare,” said Hopkins, adding that the company is making plans to build on its relationships with physicians, clinicians and other pharma companies to ensure that it can bring its technology to “the widest range of patients and customers,” for a brighter future for all.