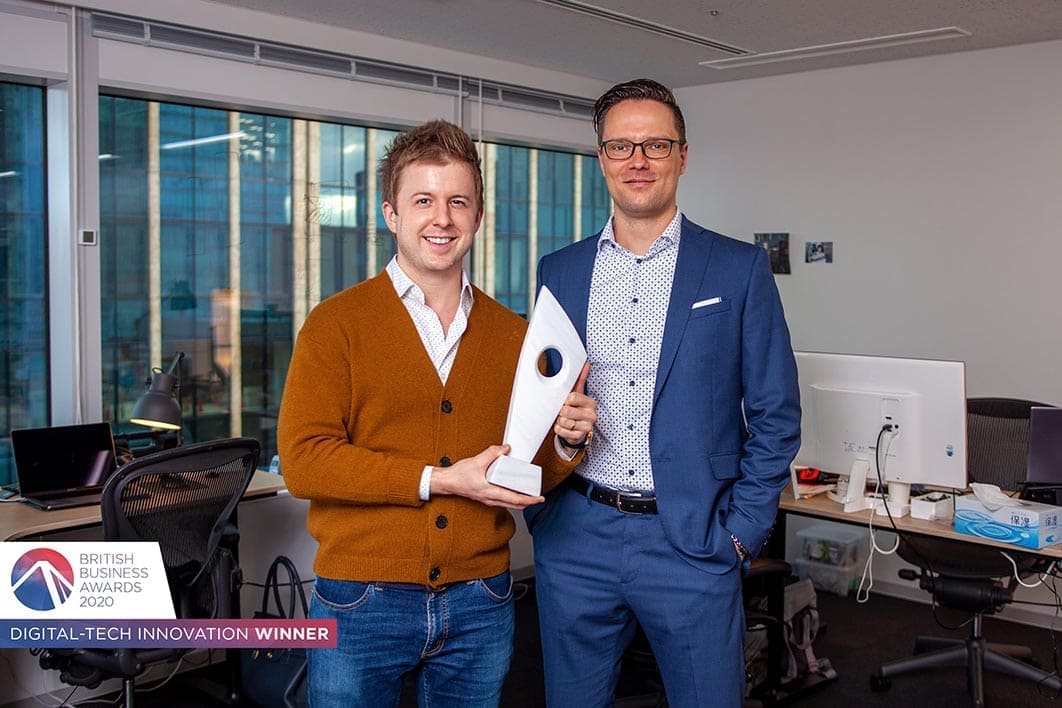 Japan-based start-up Bisu is adding a British Business Award (BBA) to its list of 2020 achievements after winning the gong for Digi-Tech Innovation at the British Chamber of Commerce in Japan’s 2020 virtual gala on November 5.

The health tech company fought off competition from 10 businesses in the hotly contested category. Six judges from a wide cross-sector of the UK–Japan professional community recognized Bisu for its novel health-tracking device: a smart urine analyser.

Designed to be used by anyone, the device utilises cutting-edge microfluidic technology, novel design and intelligent software to help people better understand their health condition. The current focus is nutrition, such as the level of minerals, vitamins, antioxidants and water in the body, to help anyone to easily improve their fitness, weight loss or general health.

The user simply places a few drops of sample on the absorbent tip of the Bisu test stick, which contains a microfluidic chip, and then inserts the stick in a Bisu device to be read in real-time. The results are sent to the user’s smartphone within two minutes along with specific, personalised advice on how the user can optimise their health and fitness.

The technology marks a major step forward in the way people monitor their health, according to Daniel Maggs, Bisu’s co-founder and CEO. Until now, he says, people have had limited, inaccurate or inefficient tools to understand the effect of their daily habits on their bodies, despite those habits being responsible for 50% of disease risk, according to the US Centers for Disease Control and Prevention. That is why he and Wojciech Bula, Bisu’s co-founder and CTO, created the device: to help people better understand their bodies so they can lead “a healthier, happier life.”

Maggs’ drive to launch the business five years ago was “to do something meaningful and valuable in the area of health” by making a useful device for people in Japan and around the world. Bula, on the other hand, wanted to take his research specialty, microfluidic technology, out of the laboratory and place it in the hands of consumers. He saw a gap between the highly sophisticated technology used in research projects and the leveraging of that technology to create a useful product tailored to the mass market.

“It’s a gap that should be filled by start-ups [like Bisu],” he says, adding that now is an opportune time to innovate with microfluidics. He likens today’s rapid innovations in the field to the revolutionary development of computing hardware in the 1960s.

And Bisu’s innovation alone can have a dramatic impact on society, according to Maggs: “Bisu’s technology allows the automation of chemical reactions that normally require manual processes in the lab. It means that the lab can come out into the home or even more remote places like rural Africa. It’s a huge step forward from conventional urine test strips, which have been around for almost 70 years.”

With the goal of bringing the device to market in 2021, Maggs and Bula have been accelerating Bisu’s development in the past 12 months, with considerable success.

The pair has validated the technology as suitable for mass production and filed patents on both the technology and design elements. Japan has also been chosen as the location for production, which Maggs says reflects the firm’s “belief in Japan as a place for a start-up.”

In the area of product development, the team discovered this year that the technology can be expanded to test not only adults but also babies and pets. It can even monitor oral health through a saliva test that uses the same chip. Bisu also plans to offer pregnancy and ovulation tests in time, providing a complete suite of tests for the whole family.

Maggs believes this revelation signals the possible growth of Bisu into a “platform” that can be used by people in different stages of their lives. While building a strong brand, there is potential for Bisu to collaborate with others, for example in pet care or oral hygiene, “to help build a product and service ecosystem around the device,” he says.

The firm is even seeing interest from space agencies, which are constantly seeking new technology that can easily and effectively monitor the health of astronauts in space.

“The most important award I want is for customers to say they love the product but getting these awards—and now a BBA—makes us feel that we’re on the right track,” says Maggs.

Bula agrees: “Winning a BBA shows that we are able to compete with big names. It has boosted our self-confidence as a start-up and also strengthened our connection to Europe.”

With Bisu’s solid ties to Japan and the United States—from where its capital and software is sourced—UK-born Maggs hopes the BBA will also build Bisu’s relationships with Britain.

Raising awareness of the firm in Japan is also a priority, he says. The story behind the firm’s name may aid those efforts. In ancient Egypt, Bisu was a guardian deity depicted with a sword and a rattle who protected families from evil and disease, and entertained children. He was also a foreign god who had no shrine or temple, but instead was believed to live in people’s homes.

“For us, the name is meaningful because we have a product that lives in the home and helps families enjoy a healthier, happier life,” says Maggs. “And, like Bisu, we are foreigners, bringing a new approach to the old industry of urine analysis.”