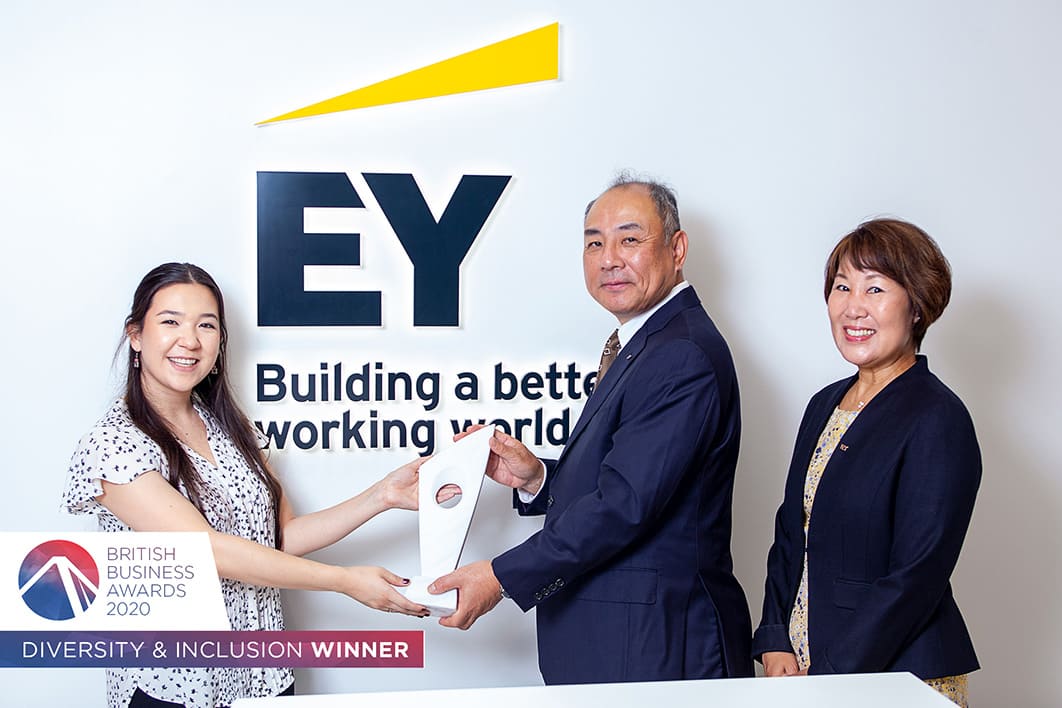 EY Japan has been awarded a British Business Award for a second consecutive year, building on its win in the category of innovation in 2019 to accept the trophy for diversity and inclusion at the British Chamber of Commerce in Japan’s 2020 event, held online on November 5.

The firm was recognised for its Women Athletes Business Network (WABN), which supports professional female athletes in their transition into a second career in business. Part of EY’s corporate responsibility and social impact initiative, Ripples, WABN has two aims: to unlock the potential of the next generation of leaders in society and to bridge the economic gender gap.

Janelle Sasaki, director of branding, marketing and communications at EY Japan and the EY Global WABN leader, says the programme is founded on both scientific evidence and real-life examples of the link between competitive sport and successful female business leaders.

In a survey of more than 400 C-suite and executive women carried out by EY in conjunction with sports broadcaster ESPNW, 94% of respondents said they played sport, while 57% said they had played competitive sport in college.

“This data confirmed our gut instinct that if you want to focus on getting more women in leadership, you should focus on women athletes,” says Sasaki.

Adding women athletes to the workplace also adds value to a business’ bottom line by boosting diversity and inclusion. Sasaki notes that in these “uncertain and changing times, the issues that we face in business are much more complex. In order to overcome these new challenges, we need people with diverse perspectives, cultures, backgrounds and experiences in leadership roles in business.”

Female athletes, she adds, are an “untapped pipeline” of talent as they have skills, experiences and accomplishments that can be applied to a career in business and leveraged for success.

As a former competitive gymnast in the United States, Sasaki is all too familiar with the difficulties of transitioning from professional sport. In her case, she returned to education as she retired at a relatively young age, but athletes of other disciplines tend to retire later in life, which poses the challenge of how they approach a second career.

“This transition is extremely hard for athletes all over the world,” she says. “While they can set goals in their sport, they have a hard time setting goals for their next career outside of sport.”

WABN is working to change that. Its signature programme connects athletes and female executives in EY via mentorship, which covers all aspects of professional life, from general advice on business to skill-building and the development of leadership qualities to goal setting and possible career paths.

Since WABN’s global launch in 2015 ahead of the Rio Olympic and Paralympic Games in 2016, it has been expanded to operate in the Americas, Europe and the Asia-Pacific.

In Japan, it was initiated in 2016 and bolstered in 2018. Efforts were driven by Yoko Kudo, financial accounting advisory services digital and Q&RM leader at EY Japan and executive sponsor of WABN, who believed in Sasaki’s potential to expand the network and lead WABN globally.

Today, WABN membership includes Olympians, Paralympians and other elite athletes from a variety of activities and sports.

Participants in the programme have gone on to find a wide variety of professional opportunities. Some have established companies, including those tackling social and environmental issues, while others have accepted roles within EY. About 20 were hired by the firm following the conclusion of their sporting careers at Rio 2016 and the PyeongChang Winter Games in 2018.

Sasaki says these new recruits have brought new energy to the firm, further proving the programme’s value for the women athletes involved and all employees.

“Our athletes have engaged our employees via fire-side chats, teaching them and inspiring them with their stories,” she says, adding that two WABN members—a weightlifter and a gymnast—have even provided remote workouts for staff working from home due to the pandemic.

In the face of the challenges posed by the spread of COVID-19, WABN continues to thrive and grow, becoming a valuable part of EY that is backed by the entire staff. Sasaki attributes the success to the firm’s “it takes a village approach” whereby teams actively encourage the projects of others.

She is supported in WABN’s Japan work by Miho Onodera of EY’s brand, marketing and communications department, who also draws on personal experience for the role. As a former agent and manager of the curling team of her sister, Ayumi Ogasawara, a three-time Olympian in the sport of curling, Onodera is driven by a strong desire “to do something for athletes.”

WABN is set to be expanded within the next year. In addition to welcoming another 20 athletes who will be matched with an EY mentor, it will offer three new streams. First, a 10-month programme comprising skill-building sessions to align with the World Economic Forum’s goal to boost women’s economic security. Second, a Power-up Programme to give participants greater confidence, drive and purpose to take on leadership roles. And third, a two-day, in-person round table event focusing on entrepreneurship, which will offer peer-to-peer coaching on topics like branding, financial literacy and networking.

Following delivery of this pilot plan, a similar plan is to be developed and rolled out for Japan, which Sasaki hopes will help Japan in its long-term efforts to achieve gender equality.

“EY’s purpose is to build a better working world and WABN is a business initiative to help reach this ambition,” she says. “In order to make positive change, we have to keep making progress. And we’re grateful to the BCCJ for recognising the value that we bring to society.”