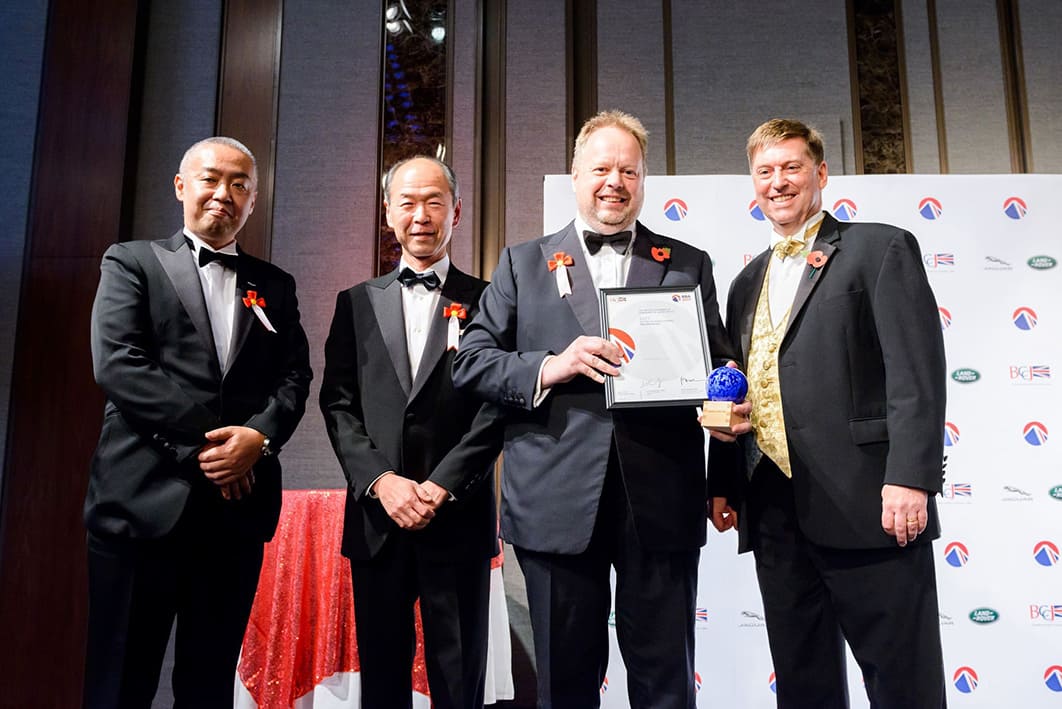 The past 12 months have been good for Aston Martin Lagonda, with record profits, a lucrative Japan-UK deal and a new Tokyo brand centre, not to mention a British Business Award. The BCCJ member firm picked up the trophy of Company of the Year at the BCCJ’s headliner red carpet event in November.

Aston Martin Lagonda was recognised for driving trade and investment between the UK and Japan in its latest deal, announced August 2017, worth up to £500 million over the next five years. The deal is expected to support British manufacturing, the Japanese supply chain and the development of the Aston Martin brand in Japan.

Models to be exported from its West Midlands and Wales plants to Japan include existing favourites, new sports cars and the firm’s first sports utility vehicle. As part of the move, the company will buy more than £70 million in components from such Japanese suppliers as Bridgestone, Denso, Mitsubishi and Yazaki. By doing so, it is supporting manufacturing and the supply chain not only in the UK but also in Japan.

The move builds on record successes. In the firm’s 2017 half-yearly results, it registered record profits, with its third successive quarter of pre-tax profit. Revenues were almost double year-on-year, at £410.4 million. Moreover, 2017 is set to be the highest year on record for sales in the Japanese market.

Accepting the Company of the Year award, Dr Andy Palmer, CEO of Aston Martin, said: “On behalf of all the family at Aston Martin, I’m delighted to receive this prestigious award from the BCCJ, in recognition of what has been a fantastic year for us. In the Japanese market, my second home, we are set for our best year on record in terms of sales, having just launched out new Tokyo dealership on Aoyama Dori.”

This new dealership is expected to become the firm’s largest worldwide by volume based on current sales.

Dr Palmer added that “further fruits of the firm’s significant investment” in Japan are evidenced in the House of Aston Martin Aoyama: a brand experience centre featuring vehicle displays, a shop and entertaining space. Opened in November, it is the company’s first brand centre in the world.

This year’s developments for Aston Martin also include a new Japan headquarters, to house the team that has more than doubled, and the launch of four new models: Vanquish S, DB11 V8, Valkyrie and Vantage.

In 2018, an Aston Martin Meta Technology and Luxury Accelerator office is scheduled to open. Designed to develop insights into luxury consumer behaviour in Japan and the rest of Asia, it will support the innovations that Japan is making in the luxury market.

Staff will also carry out research on the electric and connected car market in Japan, as well as the technologies and businesses associated with the industry. The development work is part of the firm’s commitment to sustainability, having embraced the industry trend in downsizing and turbo charging engines in order to significantly lower emissions from new models.

Specifically, work is underway on the development of a fully electric Rapide four-door four-seat vehicle, which will be sold in the Japanese market.

Speaking at the British Business Awards, Dr Palmer welcomed the BCCJ’s work, saying, “My team in Japan are grateful to the BCCJ for all the vital support that they provide to expand the business of the British community in Japan.”