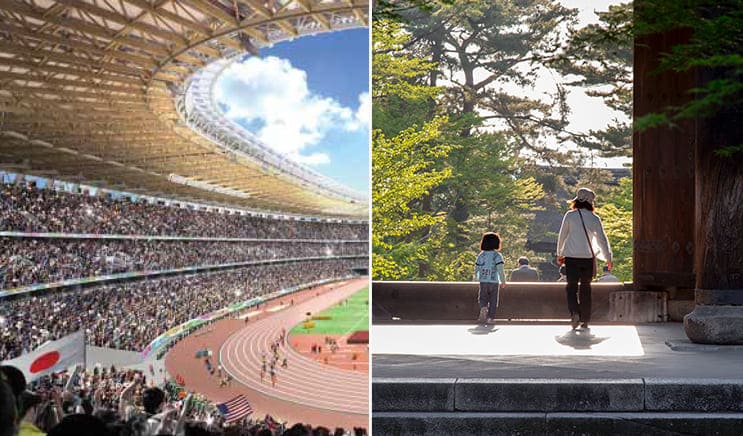 As host of the Rugby World Cup (RWC) 2019 and the Tokyo 2020 Olympic and Paralympic Games, Japan will be in the international spotlight, not just for its sporting offerings but its cultural ones, too.

Ever since 776 BC, the year of the first Olympiad, sport has been showcased at the Games alongside cultural pursuits, diplomacy, business and more. In the early years, the Games hosted poetry competitions as well as intellectual debates.

Fast forward to the present day, the Games have become the culmination of a four-year Cultural Olympiad, featuring events across the host country.

Tokyo 2020 aspires to be no different. Its Cultural Olympiad kicked off in October 2016, with the promise of digital offerings to showcase Japanese culture to the world in the lead up to the Games.

To capitalise on the once-in-a-lifetime opportunity of global sporting events in close succession, the UK and Japan are to host a concurrent UK–Japan Season of Culture. It will bring together artists, technology experts, researchers and business leaders from both countries.

Starting in September 2019 (at the same time as the RWC) and closing in September 2020 (following the Paralympics), the Season is designed to “provide opportunities to share state-of-the-art digital technology, including virtual reality and robotics, and will showcase the best UK and Japanese creativity,” according to a British government statement.

In addition, both countries have recognised the wider role that the Season can play, using arts and culture to boost well-being, mainstream diversity and inclusion, and drive prosperity.

Announcing the initiative in August 2017, as part of the Japan–UK Joint Declaration on Prosperity Cooperation,  Prime Minister Theresa May said the UK and Japan have “a natural cultural and artistic affinity” on which bilateral partnerships can “continue to blossom.”

The British Council, in partnership with the Foreign & Commonwealth Office, Department for International Trade and Department for Digital, Culture, Media and Sport, is leading the Season’s activities in Japan.

According to Matt Burney, director of the British Council, the success for businesses and the arts resulting from the recently closed UK–Korea Season of Culture is an indication of the potential of the forthcoming Season. He plans to glean lessons from South Korea’s events to provide experiences in Japan that build on existing bilateral work.

Burney is inviting all BCCJ members to consider becoming a partner of the Season, to celebrate and showcase the power of culture for commercial and social benefit.

“Part of the role of the Season is to act as a bridge between the UK and Japan, to respond to what Japanese partners are telling us they want in terms of knowledge, ideas, experience and expertise. It means marrying those wants with the best that the UK has to offer,” he explained.

With a “strong ecosystem of businesses” related to the UK and Japan, he believes the BCCJ is home to the firms that can best support and benefit from the Season.

The Season will focus on three themes based on issues that are pertinent to both countries:

“As developed economies, Japan and the UK share many of the same challenges and strengths. Our idea is to bring them together and help shape their future,” explains Manami Yuasa, head of arts at the British Council Japan. “We can use the Season as a springboard to develop new relationships and create a legacy.”

Diversity, inclusion and well-being are critical for both the UK and Japan, due to demographic changes under way and a desire for greater social responsibility. Burney believes that London 2012, particularly the Paralympic Games, was a catalyst for changing people’s thinking about disability.

“Before London 2012, people thought the person was disabled because of his or her physical condition. But, afterwards, people started to see disability not as the individual’s problem but society’s problem. When institutions fail to make reasonable adjustments to allow full participation, it is society that is the disabler, not the disabled person,” he explained.

As the organisers of Tokyo 2020 are keen to learn from the UK’s experience in this area, there is a vast amount of existing bilateral work related to creating barrier-free societies and equal opportunities for all.

The Season will therefore drive the mainstreaming of work by artists with disabilities and improve access to the arts for those who have fewer opportunities to participate.

Against a backdrop of expanding urbanisation and a growing number of mega cities—such as Tokyo and London—the Season will bring together artists and technologists. Under the theme of cities and public spaces, their goal will be to create a rich offering of activities and experiences in cities that might make them better places to live, work and visit.

The final theme will also utilise technological expertise, with collaborators exploring how digital innovation can make arts and culture more enriching, diverse and relevant to the 21st century.

According to Burney, it is an exciting time to be involved in “effecting positive social change leading to better well-being and economic outcomes, all underpinned by the approach of culture and creative industries.”