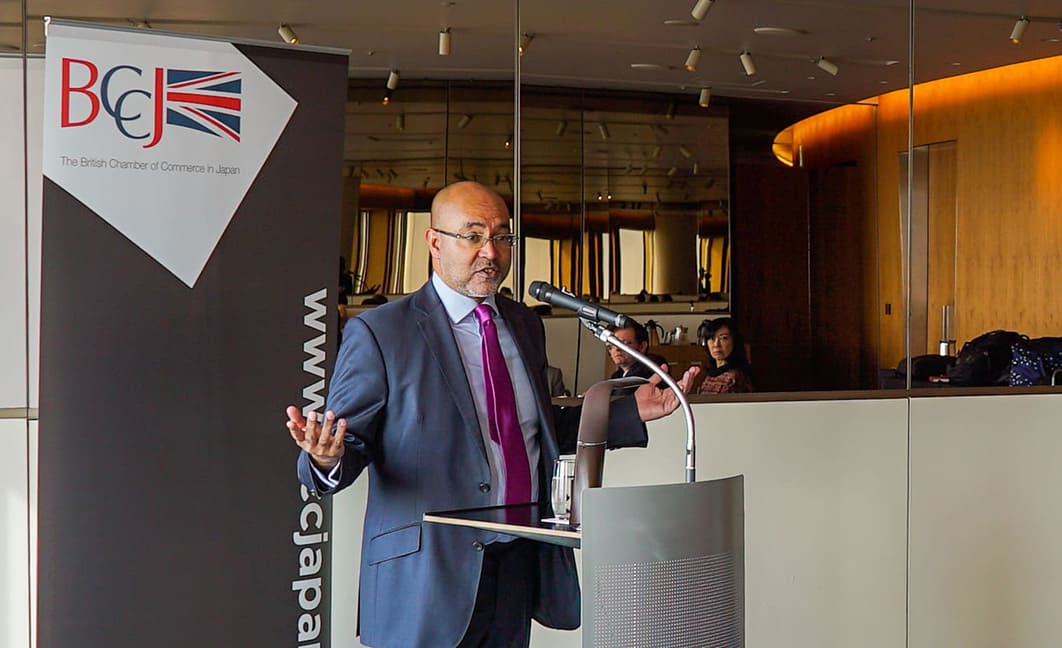 Brexit offers opportunities for the UK to engage more with the rest of the world, Shamik Dhar of the Foreign & Commonwealth Office told BCCJ members on 28th November.

Speaking at the BCCJ event “Asia and the UK: prospects in a post-Brexit era,” the FCO’s chief economist and director of economics discussed the commercial opportunities that might emerge in a post-Brexit environment as well as how challenges before Brexit might be overcome.

Japan is expected to be an increasingly important partner for the UK after Brexit, which he said is evidenced by the number and seniority of UK ministers who have visited Japanese government officials in the past year. His trip, too, involved meetings with Japan’s business leaders as well as opportunities to seek the views of the wider business community on key Brexit-related issues.

Mr Dhar explained that, although the UK’s membership in the EU has allowed it to “build up a fantastic European presence” thanks to easy trade between member states, it also has had side effects.

Meanwhile, he explained that, in the past 40 years, some of the UK’s relationships with Asian countries were strong but were not developed as much as they could have been. Now, however, Brexit offers a chance to change that.

“The future is pretty clear,” he said. “There is a massive decadal shift from the West to the East. It’s really important that countries such as the UK—which will hopefully be trading more directly with the world [after Brexit]—engages, understands and builds relations with the area of the world that will be probably the fastest growing and certainly the largest economically within a few decades.”

Mr Dhar pointed out that the UK will “always be culturally, historically and geographically a European nation” and it will continue to do the bulk of its trade with the EU no matter the trade deal. Asia, however, is worth more than the EU in economic terms, making it a place in which the UK needs to invest time and resources.

Addressing a UK-EU trade deal, he said that, although the government was seeking a trade relationship with the EU that is as close as possible, the cost of a no-deal scenario pre-Brexit is “not so dramatic that we should abandon a fall-back position entirely.”

In an engaging Q&A session, BCCJ members raised the possibility of a post-Brexit brain drain, to which Mr Dhar answered that one scenario would be a fall in productivity due to an inability to access skilled labour. Another scenario, however, would be that the UK’s new global brand attracts as much trade, investment and skilled labour as the UK had before it initiated Article 50.

Asked how the government might develop the brand, Mr Dhar said that the government’s new industrial strategy, launched in November, is aligned with work in the area.

The strategy focuses on the themes of ideas, people, infrastructure, business environment and places, with the goal of delivering a highly skilled, diverse economy. Critical to achieving that, he said, is the inclusion of people as well as places and things in the concept of infrastructure.

In addition to sending the message to the world that the UK remain global in its outlook, Mr Dhar said the upcoming Commonwealth Heads of Government meeting scheduled in London in April would provide further opportunities to connect and rebuild with commercial partners around the world.