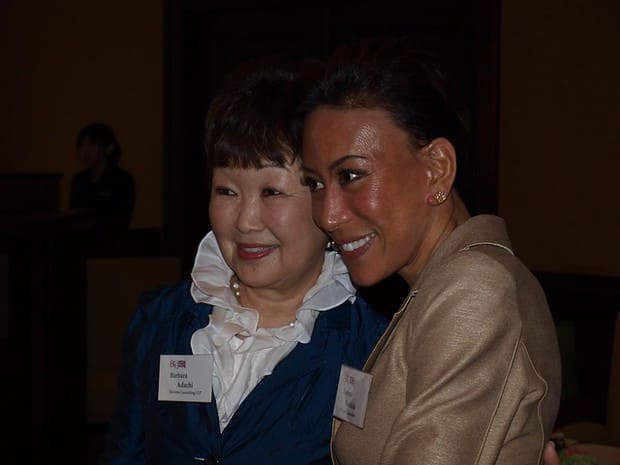 Learning of the news yesterday morning, July 8, the BCCJ Executive Committee wishes to express its deepest condolences to Yoshida-san’s family and friends.

We have since been receiving messages of condolence and a selection of these are below, led by BCCJ President, David Bickle.

I think all of us are in shock at hearing this. Yoshida san was a leader and pioneer who was simply not satisfied to accept the status quo. A trailblazer, role model and personality of tremendous influence. UK business has long been proud to feel blessed by a special connection to Yoshida san because of her long held position at the helm of BT Japan.
– David Bickle

I have so many happy memories of working with Haruno on all sorts of projects, from Philip Hammond’s visit to the BT facilities during his time as Foreign Secretary to the many events where she inspired young women to break through the cultural barriers to pursue their professional goals. I will always remember her for her huge energy, positive mind-set and sense of style – but also for her personal warmth and wicked sense of humour. Truly one of the greats. My heartfelt condolences to her family for their loss.
– Sue KinoshitaIt is so very sad – she was so young and was on very good form when she was on the panel at the BCCJ’s international women’s day event, so this comes as a shock to everyone. She leaves quite a legacy, though – what an inspiration she was, especially to women leaders in Japan. – Tove Kinooka

What sad news and a big surprise. I have no way to believe nor accept that. I saw her in the newspaper just a few days ago. I have only very good memory to have joyful chat with her at the BCCJ events and other occasions. It is very saddening.– Susumu Kaminaga I am so glad to have seen Yoshida san in person earlier in the year and to have admired her from the BCCJ table that morning she spoke on the W-20 after she had chatted with me 1:1. I know she must have been busy but she always had time for everyone.– Catherine O Connell Haruno, one of the most inspiring and interesting movers and shakers we have had the pleasure of knowing.– Suzanne Price

A terrible shock to hear such a young and vibrant woman has been lost. Yoshida-san had this incredible skill to marry absolute authenticity and a touch of eccentricity with uncompromising business smarts and uncompromising leadership impact. A pioneer who will be missed, but talked about and studied for years to come. A rare mix of being absolutely unique and absolutely credible – her absence leaves a gap in the business world that will be hard to fill, but her legacy lives on. – Sarah Furuya Yoshida-san was an incredible life-force and truly amazing character. She could light up any room, and brought tremendous energy to our community over the years. Words cannot express our deep sense of shock and loss at the passing of our friend, mentor and role-model. Sending our most sincere condolences to Yoshida-san’s family.– Lori Henderson  Words cannot describe such terrible news; Yoshida-san was so young and gone too early.– Trevor Webster I can’t believe that we lost such an amazing person from our society. She had great passion and the power to influence Japanese business people into being reborn as global citizens.– Noriko Silvester I’ll always be grateful to the gift of coincidence when I ran into Yoshida-san. It extended experience to my small telecom company and we supported The Honourable Artillery Company (HAC) during their military exercise at Camp Fuji. “Results, results, results.” I’ll never forget her very fierce yet charming personality and humour. There won’t be another one like her, and we are so lucky meeting that one and very special Haruno in this lifetime.
– Miko Liggayu I spent time working with Haruno from late 2012 to 2014 when we were both at BT, my role was London 2012 and the follow on for BT globally. I made a number of visits to Tokyo at her request and inspiration. I remember one late October day in Tokyo 2013 when she asked me to deliver to a predominately male audience a presentation on why diversity is so important and its role in London 2012 from a male perspective, she was strong and always fought for her beliefs, a true force for change, my thoughts are with her family.– John Wright Haruno-san was irreverent, irrepressible and fearless, whether she was exhorting us to stand up for ourselves or scolding various (did the B20 even know what hit them?) gatherings on their lack of diversity. I am terribly sad that we have lost this leading light.
– Jennifer Sakaguchi I had the absolute pleasure and honour of working closely with Haruno in developing BT’s work with Japanese media companies. A truly unique individual who was not only a top tier senior business executive and a formidable global ambassador for women at the highest levels of business, but also an engaging down to earth personality who could light up any room with her wit, genuine interest in other people, and her legendary style. A true “one-off” who will be missed by everyone who knew her. My condolences to her family and particularly her daughter who she always spoke so fondly of.
– Mark Wilson-Dunn

She was so vibrant with so much energy and so positive.  I’m truly saddened that this bright light has gone out. Thank you for giving me the opportunity to meet her and learn from her example.
– Justin Keyes

I am deeply shocked at the news of Yoshida san’s passing. She was such a bright inspiration who made such a positive difference to business in Japan.
– Alison Beale

If you have a memory and / or photograph of Yoshida-san you would like to share, please email [email protected] with “Haruno Yoshida” in the subject line.