Resilience and Adaptation for Japan’s Travel and Tourism Industry

Written by Sterling Content
September 25, 2020
Past Event Round Ups 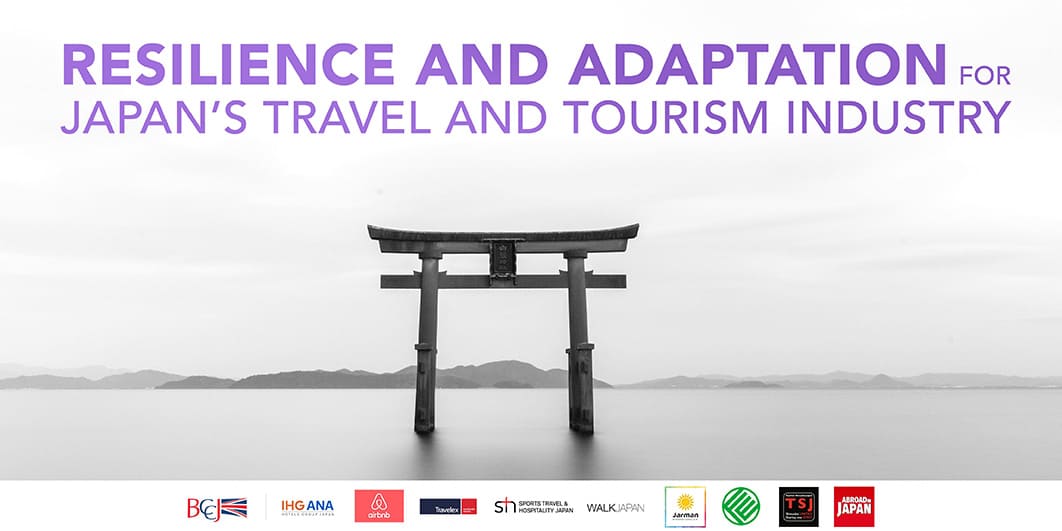 Written by Sterling Content
September 25, 2020
Past Event Round Ups

Adaptability, creativity, diversification and collaboration are vital for Japan’s tourism industry to survive—and rebound—in the post-pandemic world say industry-related members of the British Chamber of Commerce in Japan (BCCJ).

Representatives of a range of travel and tourism-related businesses from across Japan made the comments during the BCCJ’s second Travel and Tourism Think Tank, “Travel and Resilience,” on September 15, citing ways in which the sector can prepare for the “new normal” in travel.

Travel and tourism are among Japan’s hardest hit industries. The closure of Japan’s borders to curb the spread of the virus has seen international arrivals plunge 99.9% year-on-year.  Domestic travel, meanwhile, has been hampered by a state of emergency that encouraged people to stay home, as well as concern on rising infection rates, even as the Japanese government launched its Go to Travel domestic subsidy campaign.

The blow is particularly shocking because 2020 was to be a landmark year for Japan. Buoyed by a record 31.9 million inbound visitors in 2019, the country was set to shine as host of the Olympic and Paralympic Games. Tokyo 2020 was expected to help Japan reach the government’s target of 40 million tourists annually and inject $300 billion of domestic and international tourism revenue into the economy.

At STH Japan, the official hospitality provider of the Rugby World Cup 2019, hopes were high for 2020, as the successful rugby tournament had kickstarted Japan’s fledgling sports hospitality industry. “Preparations were in full swing for the Olympics [before their postponement]. Now our new normal is fast-paced change, adaption and planning for the next 18 months,” said Cristina Merino, the firm’s head of customer relations.

Businesses that target international tourists are also focused on financial planning to await inbound arrivals. Paul Christie, CEO of Walk Japan, shared that he doesn’t expect any significant revenue until autumn 2021 but remains confident because of interest from his customers. “Tourism will come back; the problem is that we don’t know when, which makes it hard to plan,” he said.

Still, some positivity remains, according to Ruth Jarman, CEO of Jarman International, whose clients are utilising the year-long postponement of Tokyo 2020 to better prepare for visitors during Games time in 2021.

Jarman pointed out that the pandemic has driven some positive change in approaches and attitudes to work.

“A lot of very traditional-thinking firms and localities are being forced to do something new: having online meetings and leveraging technology to host online events,” she explained, citing Earth Celebration as an example. The taiko drum and music festival on Sado Island, Niigata, was held online this year, generating interest from overseas.

Airbnb also maximised interest in online events to launch more than 50 online experiences in Japan, including meditation and virtual walks around Shibuya. These experiences, said Mika Yamamoto, public policy manager, will be used as a marketing tool in the future, to provide a glimpse of Japanese culture that entices platform users to Japan.

Furthermore, the uptick in teleworking is normalizing online meetings, allowing regional business owners to remain in the regions rather than the cities, such as Walk Japan’s Christie who recently departed a Tokyo office for Oita Prefecture.

Remote working is driving people who don’t wish to work from their home to seek out private Airbnb accommodation nearby, explained Yamamoto. Hotels, meanwhile, are meeting demand with special room rates for work use or “workcations” (working vacation).

In the area of community engagement, Naohiro Fukawa, director of Tourism Shizuoka, said the pandemic presents an opportunity for the tourism industry “to reset the old normal and find better ways to be more co-creative.” In the past six months, his destination marketing organisation has embraced a strategic, long-term approach to marketing that focuses on sustainable, responsible and community-based tourism, which he says will become “the new normal.”

Jarman agreed that teamwork is being embraced, noting that her Japanese counterparts are seeing long-term, foreign residents of Japan as “much more part of the [tourism] team than before.” The increased input from Japan experts of all nationalities is likely to provide future inbound tourists with a “much deeper experience of Japan,” she added.

With international tourism paused indefinitely, many in the industry have pivoted to the domestic market to generate much-needed revenue.

Among them is IHG/ANA Hotels Group, which redesigned its domestic marketing strategy to focus on local stays. “Japan is very fortunate to have a buoyant domestic market across all income groups,” said CEO Hans Heijligers, adding that full bookings at 10–12 of its hotels over the long weekend in September indicate the strength of the local market. Rebound has been most pronounced in its second- and third-tier city hotels—Hakone, Beppu, Niigata and Toyama—rather than in Tokyo and Osaka, which have been increasingly dependent on inbound travel in recent years.

Yamamoto said Airbnb is benefiting from a boom in micro-tourism; a recent company survey shows “solid growth” in destinations within 80 kilometres (1.5-hour drive) from home and properties that can be rented exclusively.

Graham Davis, senior advisor to the BCCJ and owner of a holiday cottage and restaurant in Kagoshima Prefecture, agreed, noting greater interest for private or self-catering accommodation, camping and glamping as travellers seek to maintain social distancing while on trips. Still, Japan needs to do more to maximise this opportunity as ryokan inns and smaller hotels cannot modify their accommodation easily to suit the market’s changing needs, he said.

STH Japan, meanwhile, is adding domestic and international travel sport packages, such as golf hospitality days, to its offering. It is working with partners, rights holders and local governments to deliver the packages in regional areas by the end of 2020.

Jun Otani, representative director of Travelex, whose currency exchange operation in Japan has declined from 90 stores in 2019 to 13 stores at present, pointed out that mass tourism may not exist post-pandemic.

“Inbound tourism to Japan in the coming years will be more personalised and tailored to small groups,” he said, adding that Travelex needs to evolve with this trend. “Before the pandemic, we focused on transactions. Now we need to focus on long-term relationships with customers and to reach out to communities and partners in the regions, not just those in Tokyo and Osaka.”

IHG/ANA’s Heijligers said the industry should prepare for vastly reduced business from MICE (meetings, incentives, conventions and exhibitions). As organisations have become more comfortable with video conferencing, corporate travel would likely be limited to that which is “essential and purpose-driven,” he said.

But when international leisure travel resumes, Japan could be in very marketable position, thanks to its high hygiene standards, commonplace mask use and culture of respecting other people, which has been reported globally in recent months. Noting that safety and security is in Japan’s DNA, Heijligers said the country has “an opportunity to accelerate leisure tourism faster than most countries because we have such a good offer.”

And until those travellers return, he said there is potential within Japan’s large and strong domestic market, particularly the 22 million Japanese who pre-pandemic were outbound travellers, often to luxury destinations. There is a need, he said, to accommodate demand for traditional offerings like seclusion and intimacy, as well as new interest in the lifestyle and luxury lifestyle parts of accommodation that includes spaces to interact with other guests. “We need to try and make the domestic pie as big as we can,” he added.

Christie agreed that high-end domestic (Japanese) tourism can be expected to “grow significantly in Japan,” adding that it might stimulate an uptick in high-end inbound visitors in the future.

In virtual break-out rooms, attendees opined that future tourism might involve longer stays with shorter itineraries or limited activities, as well as trips focused on rural areas, nature or outdoor activities. The shift in demand from sightseeing to experiences is also likely to quicken in the “new normal.” With less travel overall, there would be a need to improve the quality of offerings, explore new markets and tap previously underused resources, particularly in communities, such as shuttered schools.

There will also be greater need for promotion. Chris Broad, filmmaker at Abroad in Japan—a YouTube channel dedicated to showcasing unique parts of the country, particularly Tohoku—said attendees should use YouTube to promote their accommodation, shop, restaurant or even destination. “You can market whatever you are doing and wherever you are effectively, with the potential to be seen by tens of thousands of people over the long-term,” he said.

In closing, Moderator Adam Fulford, CEO of Fulford Enterprises, said now is the time to engage communities more in tourism and “harness the best of Japanese culture in action.” He called on attendees to come to a greater understanding “of what the new normal is now for each of us, as stakeholders, so we know how to co-create the future” of travel and tourism in Japan.