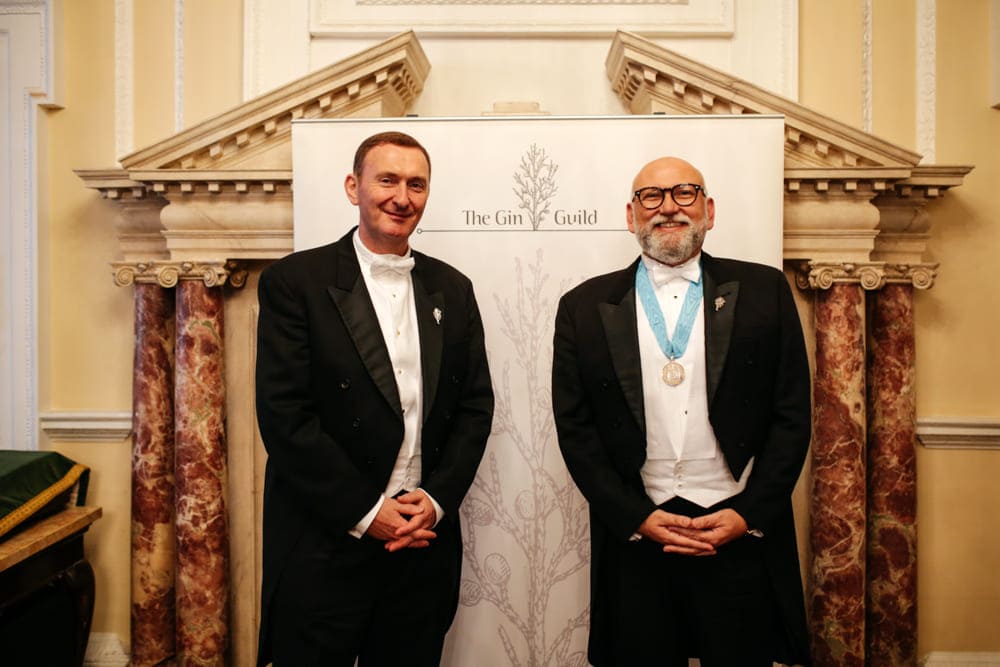 The Gin Guild has installed its first brand-owning member based in Japan.

This month, at the historic Mansion House, London, Marcin Miller, co-founder of the Kyoto Distillery, was sworn in as a Warden at a Gin Guild Installation, before the Annual Banquet hosted by the Guild’s parent company, The Worshipful Company of Distillers. The Guild is the industry body celebrating excellence in the distillation and worldwide promotion of gin.

Kyoto Distillery co-founder and BCCJ Entrepreneur member David Croll was sworn in as a Warden Nominated Rectifier of the Guild. They were among 26 new members taking their oath, as membership of The Gin Guild continues to grow.

Kyoto Distillery is Japan’s first dedicated to the production of craft gin. Its Ki No Bi Kyoto Dry Gin was named most Innovative Spirits Launch of 2016 by Spirits Business and was awarded a Gold Medal at the International Wine and Spirit Competition (IWSC) in 2017.

David Croll, named Entrepreneur of the Year at the 2010 British Business Awards, said: “I’m honoured to be the first domestic representative of a Japanese gin distillery to become a member of the Gin Guild. As pioneers in a new category, membership of an influential body with such historical associations offers an increased profile to our activities and allows us to communicate with like-minded producers from around the world”.

The Gin Guild now has almost 250 members, who also represent many more in their respective gin brands. Currently drawn from over 20 different countries across five continents, the international membership illustrates the global renaissance of gin.

Ed Pilkington, Marketing and Innovation Director for Diageo Europe, was sworn in as The Guild’s latest Grand Rectifier. He said: “The current gin renaissance is remarkable, and I believe it is here for the long term. We have a role to make that happen, with our members creating excitement and enthusiasm for the category, and building their brands around the world with real passion.”

Outgoing Grand Rectifier Martin Riley, of Pernod Ricard, added: “The interest in gin is a worldwide phenomenon, driven by innovation, effective marketing, imaginative promotions and creative cocktails. Members of The Gin Guild are at the vanguard of this movement and we are proud to have a wide range of expertise from start-ups and entrepreneurs to long-established companies with international brands represented in the Guild.”

The Guild’s next installation takes place on 8 May 2018 at the Gin Industry Annual Dinner at the Guildhall in London, which is followed by the annual Ginposium seminar on 7 June.

About The Gin Guild

The Gin Guild is a spirit industry member-funded, not-for-profit body, supported by the four major gin distilling companies, Bacardi, Diageo, William Grant and Sons and Chivas Brothers, but representing the gin industry as a whole. It aims to promote the gin category across the globe, enhancing its image and widening its appeal to worldwide consumers. It is the natural home of gin innovation, including new start-ups and craft distillers and craft distilled gin.

The Gin Guild brings together gin distillers and industry leaders involved in the production, promotion, distribution and consumption of gin and promotes and encourages commitment to excellence in gin distillation and industry custodianship of the spirit category. Gin Guild members, reflecting gin production and consumption, are international and include those from the UK, Australia, Austria, Belgium, Canada, Finland, France, Germany, Japan, India, Italy, Liechtenstein, Mexico, Norway, The Czech Republic, Russia, Spain, Sweden, and the USA.

The historical role of the Worshipful Company of Distillers – one of London’s old historical livery bodies – originally granted the right to supervise distilling in London in 1638 by Royal Charter, was to hold key responsibilities for the control and regulation of early gin distillers. That provides a unique historical link to the gin industry placing London at the historic heart of the modern gin category and industry, though the industry is now worldwide. The Worshipful Company of Distillers through the work of The Gin Guild, its subsidiary, provides and facilitates a wider opportunity for those involved in the industry to participate in a modern convivial industry forum, reflecting and including many of the traditions of the City.

Photo caption: Marcin Miller (right) and David Croll of Kyoto distillery were sworn in as The Gin Guild’s first brand-owning members from Japan.