The biodiversity crisis and the corporate response

Written by Sterling Content
January 22, 2021
Past Event Round Ups 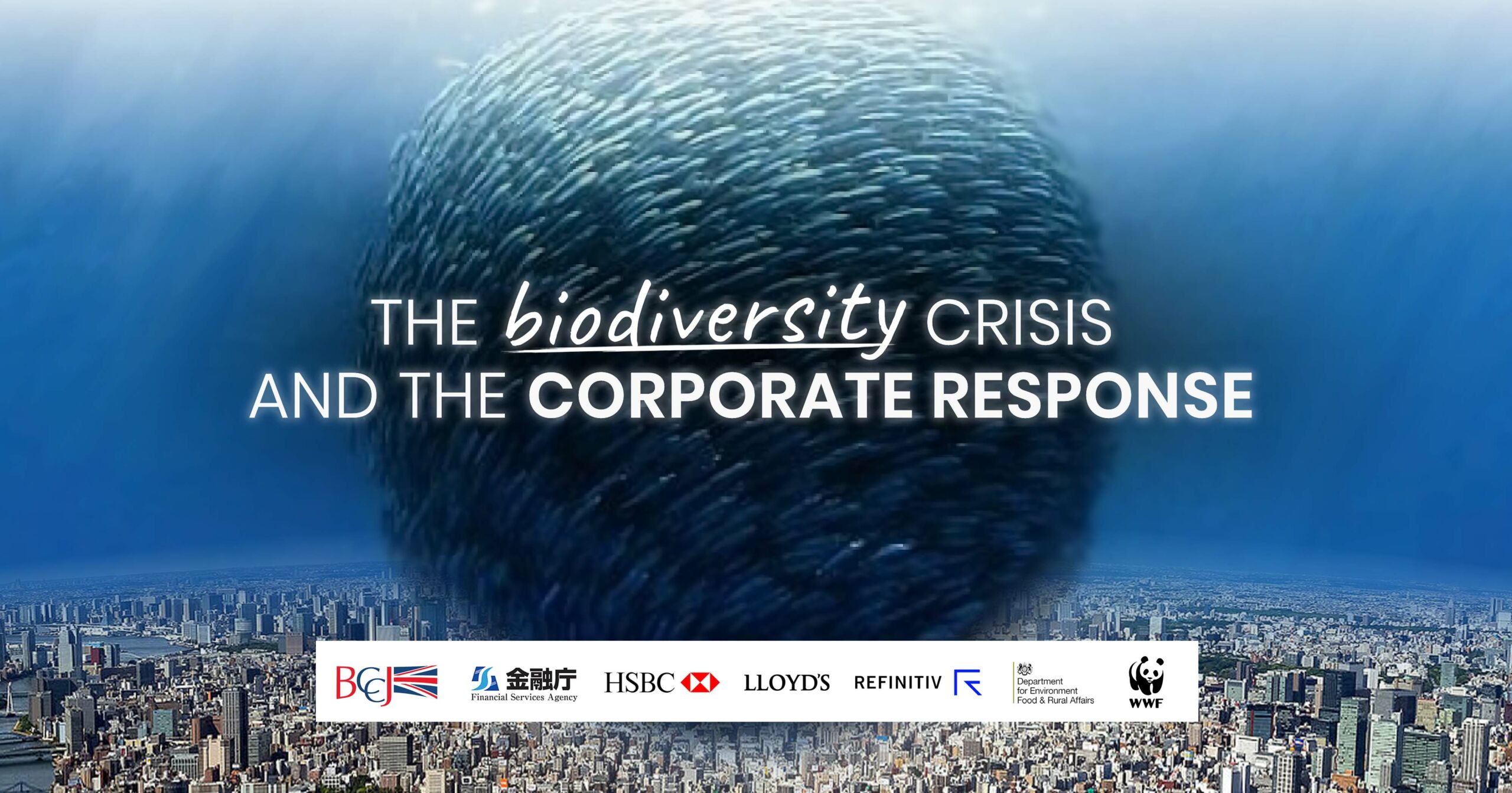 Written by Sterling Content
January 22, 2021
Past Event Round Ups

With commitments from several countries to tackle green issues as part of their COVID-19 recovery and a number of environmental conventions scheduled, 2021 has been dubbed “the super year for tackling climate change and biodiversity loss.”

The case to do so has never been stronger but difficulties in measuring biodiversity targets, mobilising political will and raising awareness among the public are among the obstacles facing organisations, said experts at a webinar hosted by the British Chamber of Commerce in Japan on January 14. Six representatives from government, business and the not-for-profit sector spoke at the online event entitled “The Biodiversity Crisis and the Corporate Response.”

Opening the webinar, Tove Kinooka, director of sustainability consultancy Global Perspectives, said humanity has caused the extinction of 83% of wild mammals and 50% of plants, according to the World Economic Forum. The resultant business risks, both operational and reputational, she added, are “very real.”

The first of three keynote speakers to address the topic was Dr Jane Stratford, deputy head of the Environment Negotiations Team at the UK’s Department of Environment, Food and Rural Affairs. Stratford explained that the world is losing biodiversity at a rate never before experienced; 30 football pitches of forest are destroyed every minute, wildlife populations have been halved in under 50 years and 1 million species are at risk of extinction.

“When we lose nature, we lose our life-support systems,” she said, pointing out that land use change, climate change, invasive species, over exploitation and pollution are among the causes. People rely on biodiversity for food supply and production as well as the ability to adapt and build resistance to climate change, making it an increasingly pressing issue.

Nature will be “at the heart” of two global conferences this year: COP 15, the UN Convention on Biological Diversity, in China, in May and COP 26, the UN Framework Convention on Climate Change, in Glasgow, in December. The UK also intends to promote the issue during its presidency of the G7 in 2021.

“The UK wants to see strong linkages between nature and climate change,” she said, citing ambitious goals for COP 15 outcomes including protection of 30% of land and sea by 2030 and a halt to extinctions.

Most important, she added, is adopting a new set of targets that don’t just sit on a shelf but instead result in action. The UK will support that action by using £3 billion of its international climate finance to support solutions that protect and restore nature and biodiversity, and aims for widespread support, from governments, businesses and individuals.

Satoshi Ikeda, chief sustainable finance officer at Japan’s Financial Services Agency, agreed that a collaborative approach is vital but said biodiversity is difficult for businesses and financial institutions to measure. Unlike climate change, which can be assessed using simple metrics such as greenhouse gas emissions, factors affecting biodiversity are complex and may not be quantifiable.

“Connecting environmental concern with business matters requires a framework to easily monitor the environmental degradation and the effect of such issues on business and finance,” he said.

The third speaker, Dr Tsunao Watanabe, senior programme coordinator at United Nations University Institute for the Advanced Study of Sustainability, noted the recent shift in thinking on biodiversity. Most policy was once centred around conservation, including establishing protected areas or limiting hunting, but the focus is now more on “using biodiversity responsibly and living in harmony with nature.”

A key concept in the global biodiversity discussion is “transformative change,” which involves “everyone—including businesses—recognising that biodiversity is a necessity for our wellbeing.” All parts of society, he added, should “make biodiversity a priority” rather than follow a business-as-usual approach or consider it “an afterthought or unpleasant responsibility.”

Watanabe called for more involvement by the private sector, pointing out that businesses should be in harmony with nature to ensure their long-term prosperity. Ultimately, though, all parts of society need to step up, to “use biodiversity sustainably in a way that conserves biodiversity for future generations,” he said.

Iain Ferguson, regional director of Asia Pacific at Lloyd’s and president of Lloyd’s Japan, led panellists in a discussion encompassing the imperatives to tackle biodiversity loss, the reporting by companies of biodiversity-related data and hopes for what can be achieved in 2021.

Marine de Bazelaire, group advisor on Natural Capital at TBSC, explained the cost of inaction. About $44 trillion of economic value generation—amounting to more than half of the world’s GDP—is moderately or highly dependent on nature and its services. Yet, despite agreement on the need to tackle the crisis, questions remain among businesses on how it can be done.

“Do we understand the chain of consequences [of our actions] and the risks along the value chain, and can we translate issues into a risk framework?” questioned de Bazelaire. “We cannot say we have a robust response to a question we don’t understand well.”

The challenges are reflected in the biodiversity impact reporting by companies. According to André Chanavat, director at product management, ESG, at Refinitiv, only 20% of the 8,500 active publicly listed companies in its database report their biodiversity impact, much lower than the ratio that report on carbon-related metrics. Moreover, of those that report, quality varies; many use qualitative rather than quantitative statements. Top reporters by sector are mineral resources, utilities, energy & fossil fuels, food & beverage and real estate.

Sadayoshi Tobai, chief executive officer of WWF Japan, said firms lack understanding on how they affect biodiversity due to the complexity of the topic. If a company is trading in timber or seafood, it is clear, he said, but that is not the case for companies who deal with many ingredients.

“We need data provider services and advisors to help companies establish the linkage between their products and services and nature, which is not so apparent in many cases,” he said.

Tobai added that political will is also required to encourage businesses “to think about biodiversity this year, not three or five years later.” In the same way that Japan’s announcement to go zero carbon by 2050 has prompted firms to tackle carbon, a commitment to biodiversity could reap benefits.

De Bazelaire predicted that the commitment of many companies to carbon zero “will be a driver to finance the restoration and preservation of biodiversity.” She is hopeful for biodiversity credits and an asset class on nature-based solutions.

SMEs and individuals are also expected to play a more important role in tackling the biodiversity crisis. Chanavat said the millions of SMEs around the world could have a great influence were they to report on their biodiversity impact.

Meanwhile, WWF Japan is shifting away from stimulating high-impact change in a few big companies to boosting awareness on sustainability among the public. Younger generations are already showing more responsible attitudes to consumption, he said, which is incentivising businesses to create more green products and services.

Awareness is also front of mind for the UK government ahead of COP 15 and COP 26. “Our hope for this year is that we can raise the profile of nature in the same way [that we have done with climate change],” said Stratford.