Written by Sterling Content
July 22, 2022
Past Event Round Ups

Written by Sterling Content
July 22, 2022
Past Event Round Ups

The role of Tokyo and London as financial centres was the theme of the British Chamber of Commerce in Japan’s breakfast event, Tale of Two Cities, on July 1.

The event began by exploring the strong and successful UK–Japan relationship that is built on shared universal values such as freedom, democracy, human rights and the rule of law.

London and Tokyo also share a strong bond, evidenced by the 2017 Memorandum of Understanding signed by the Tokyo Metropolitan Government and The City of London to advance collaboration between the cities’ financial and professional services sectors. By harnessing ingenuity and talent, both cities can recover from the COVID-19 pandemic and become stronger than ever, one panellist said.

The financial and professional services sector has taken a lead in sanctioning Russia for its invasion of Ukraine. This move has not been significantly detrimental to Tokyo, due to Japanese financial institutions’ limited exposure, or London, thanks to the city’s high degree of market diversification.

However, the war has raised questions about geopolitical security in the Asia-Pacific, namely the repercussions if China were to invade Taiwan. One speaker said Japan needs to consider if it is sufficiently diversified in capital inflow to sanction China in the same way it has sanctioned Russia. One way to improve diversity of capital inflow beyond large players, such as China and the United States, is to improve Japan’s attractiveness as a global financial city.

Another speaker noted that, given China’s importance to global trade, any aggression by China in the Asia-Pacific would have a much greater impact than would the war in Ukraine.

Attendees were asked to consider the possibility of the world experiencing the biggest financial crisis since the Lehman Shock within the next two years. A handful said the likelihood was 30–50%, about one third said 10–30% and the remainder said 0–10%. Some panellists were equally positive, commenting that they did not see an immediate risk despite interest rate-induced pressures.

It was noted that Japan is experiencing a slightly different financial situation to other parts of the world. Consumers here are not experiencing the same level of inflation as in the United States or Europe. The Bank of Japan is not going to follow other central banks’ proactive approach to inflation and Japan is not seeing inflationary pressure from wage increases, even as the cost of living rises.

The result could be increasing pressure on the Japanese government to deregulate the labour market, which has the potential to improve labour market mobility and bring higher wages, particularly for high growth sectors.

Regarding the value of the yen, the panel admitted intervention is a sensitive issue in Japan but noted that rapid excessive depreciation should be avoided. 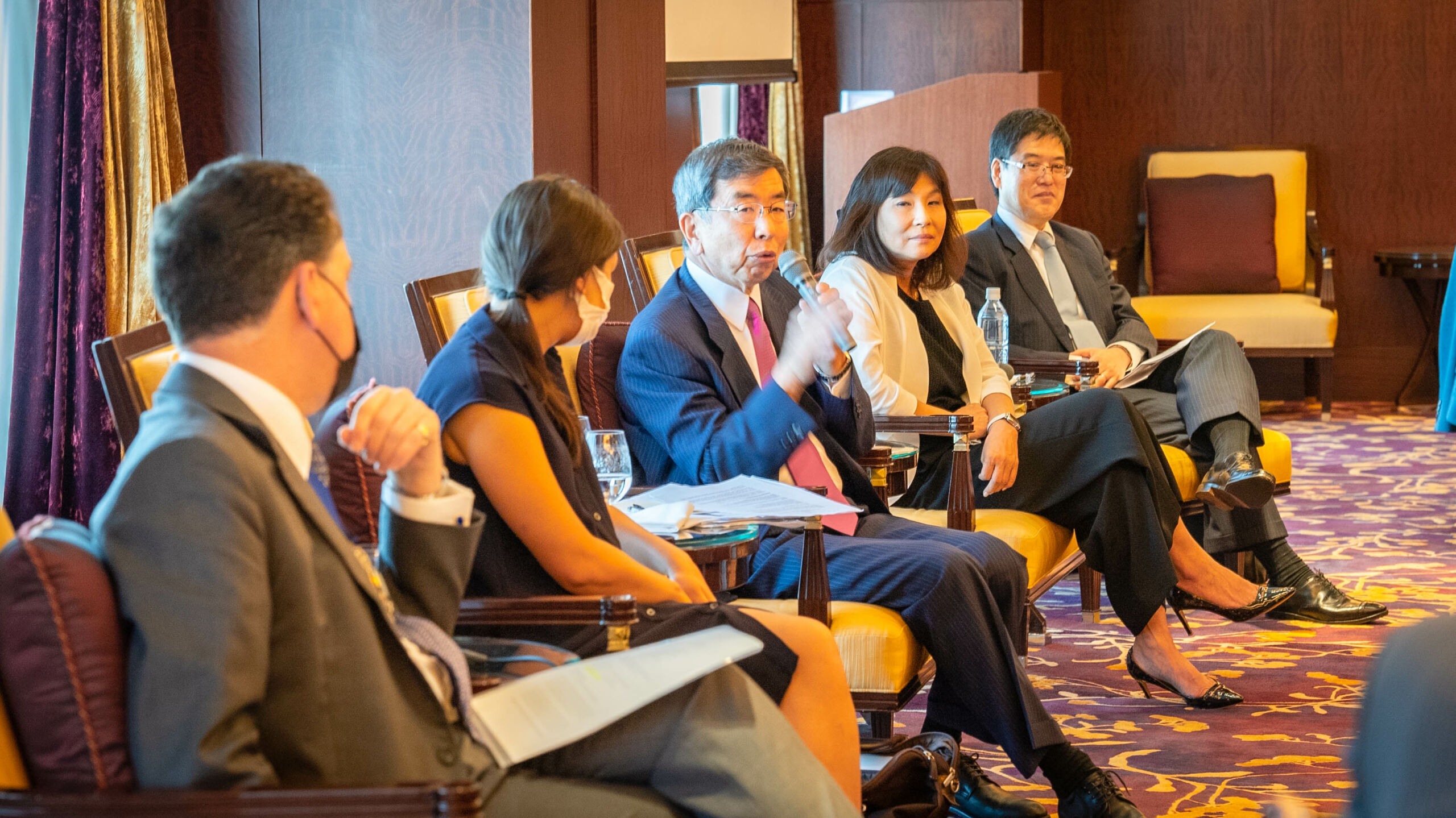 The panel considered London and Tokyo as startup locations. London benefits from global diversity of talent, a positive regulatory environment and an image of being entrepreneur-friendly. Tokyo, on the other hand, offers great cost of living but has higher setup costs to register a company and stricter labour laws.

Despite the alignment of Japanese regulations with global standards, the country remains rules-based rather than risk-based, making Tokyo less attractive for new startups and deterring Japan-based startups from expanding abroad.

Improvement could be achieved if Japan’s regulators embrace more innovation and technology companies forge closer relationships with each other, thereby facilitating discussion and innovation. Meanwhile, the private sector should address barriers such as the time required to set up a business bank account.

In local and central government, there has been a move from silo-working to cooperation. Initiatives such as the Tokyo One-Stop Business Establishment Center facilitate a better ecosystem, but panellists said they need better promotion.

Tokyo’s startup environment is also hindered by cultural mores, including risk-averse mindsets. Companies in Japan tend to do only what the government approves explicitly, unlike their counterparts in the UK and US that take a freer approach, albeit within the rules.

Despite Brexit, London remains an attractive home for businesses, particularly scale-ups seeking international growth. And while the capital has lost 7,000 jobs as a result of the UK’s departure from the European Union, the overall impact on the job market and operations of the financial and professional services sector have been minimal. Companies in the City that wanted to continue servicing clients in the EU post-Brexit have spent time and money to be able to do so, and have already moved on, said one speaker.

In Tokyo, work opportunities have improved, evidenced by greater diversity on company boards and workforces. But the city still lags in diversity, ease of doing business in English and living conditions such as education, housing and medical. The Japanese government has doubled down on tackling these issues and, as tax reform can be considered a touchstone of government measures, Japan will become an easier place to work.

During the Q&A session, it was noted that UK universities are becoming more popular for high school graduates in Japan. This was partly attributed to the ability of university graduates to remain in the UK to work, a move introduced by the government a few years ago.

Regarding the impact of the Ukraine war on energy, a short-term slowdown of the move from hydrocarbon-based energy and an increase in coal use was predicted, particularly in western Europe which had more dependence on Russian gas and oil. In the long-term, however, there is likely to be renewed investment and growth in renewable energy.

In closing, the panellists noted the progress made in recent years by London and Tokyo to become more attractive as global financial centres. Thanks to regulations, infrastructure and soft power, both the UK and Japan are attracting attention and interest from the rest of the world as a place to study, work and do business.