Surviving to Thriving: Building a Brighter Future with Wayne Visser

Written by Sterling Content
December 10, 2021
Past Event Round Ups 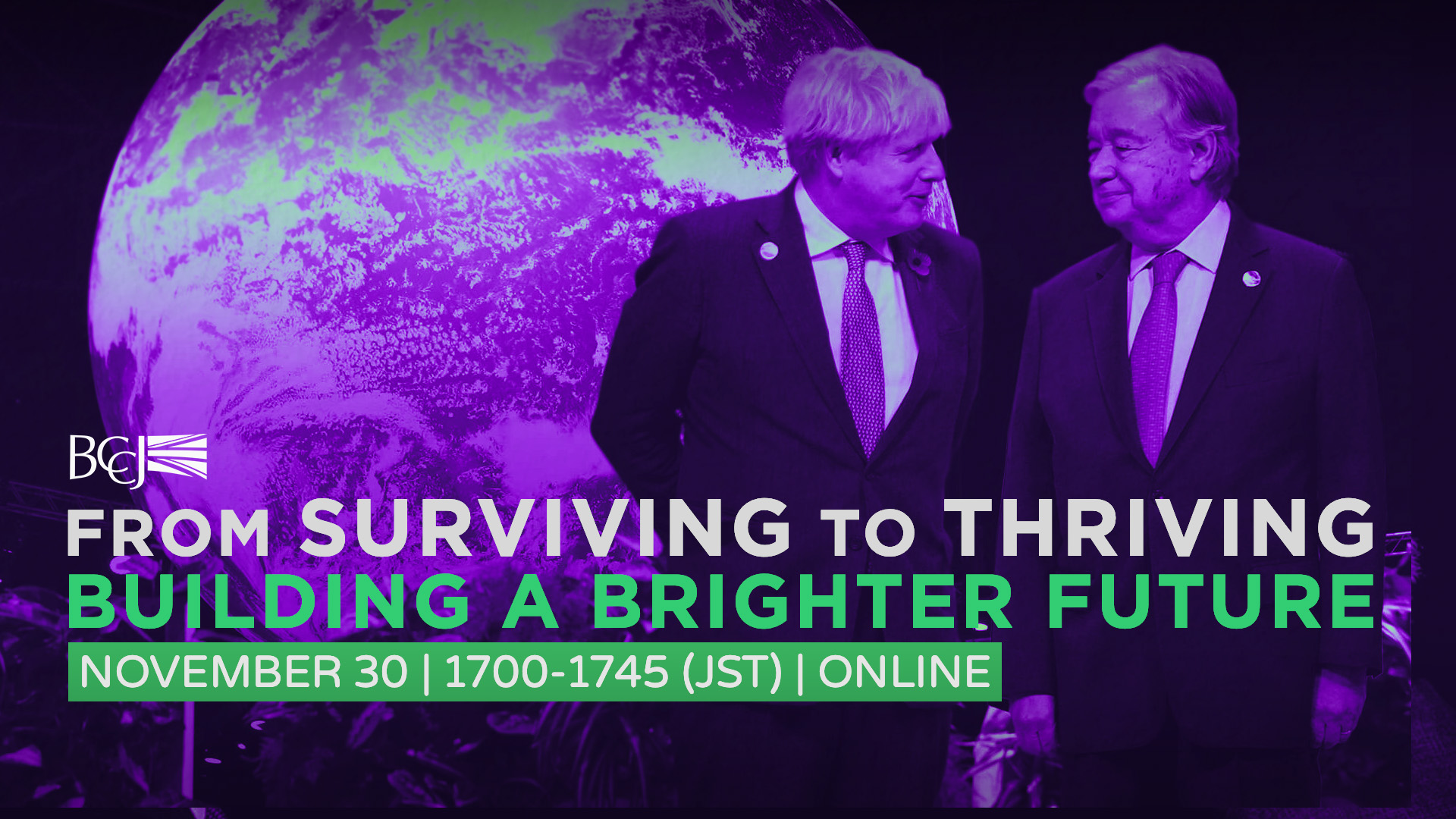 Written by Sterling Content
December 10, 2021
Past Event Round Ups

The 26th UN Climate Change Conference of the Parties (COP26) attracted criticism for not going far enough to address the global climate crisis, but Dr Wayne Visser, a Fellow of the University of Cambridge Institute for Sustainable Leadership, has described the summit as a “breakthrough” and “success.”

On November 30, the globally recognised author spoke to members of the British Chamber of Commerce in Japan (BCCJ) about his latest work: Thriving: The Breakthrough Movement to Regenerate Nature, Society, and the Economy along with how and why the world should transition its environmental mindset from surviving to thriving.

Visser said numerous outcomes from COP26, such as raising awareness of climate urgency, representations from more than 100 heads of state and strong market signals, indicate that we are “very close to a tipping point” to a “net zero pathway for carbon.” Concern that the event resulted in “too much talk but not enough action or ambition” will be alleviated in the “very near term,” he added, pointing out that “it’s very clear we need to get to net zero by 2050.” Moreover, the world is seeing heightened urgency as carbon needs to be halved every decade between now and 2050.

With announcements on new alliances, breakthrough agendas and a $130trn (£98trn) of financial assets lined up for transitioning to zero carbon, the summit has accelerated change in our complex systems by fostering “positive, reinforcing feedback loops,” he said. The resulting convergence of political will, rapid market shifts, social pressure and technological innovation, can prompt real change, he added.

Moderator Tove Kinooka, BCCJ Responsible Business Taskforce leader and director and co-founder of sustainability consultancy Global Perspectives Japan K.K., asked how a societal shift can be achieved—and if it can be achieved in time.

“We have to admit that we’re all part of a system that is breaking down,” said Visser, adding that it is people’s “high-quality, high-energy, high-consumption lifestyle,” in rich countries most markedly, that is causing stress on climate. “Developing countries with emerging economies are following that same path. That is not possible on a finite planet.”

He called for people, “as individuals, as citizens and as customers,” to make even small changes in their behaviour, such as in food (is it plant-based or organic?), products (is it fair trade?) and energy use (is it 100% renewable?). By doing so, systems can change even without the actions of the majority, he said, pointing to data that suggests the alignment of 5–25% of a group causes a tipping point that will shift the behaviour of the whole group.

Regarding the speed of fighting climate change, Visser called for urgency, noting the global system’s negative tipping points, which include the melting of the permafrost and the loss of the Amazon rainforest. But he also recognised that people’s efforts to regenerate nature “can compensate for some of these negative trends and accelerate remediation” so the worst of those tipping points might be avoided. “We do need more action,” he said. “We are in a race for our lives, but the solutions and change in behaviour are accelerating very quickly.”

Organisations of all sizes, too, can make an impact. Rather than trying to alter the complex, tightly knitted global system, companies large and small should do what they can. Their changes might prompt others to adapt, which reinforces another shift and continues to ripple through the system, creating a positive feedback loop.

“One of the powerful things we can do is form a coalition of the willing. Work with those who have positive energy and are striving to bring solutions, as that has an amplification effect,” he said, adding that the BCCJ is an example of a group bringing companies and individuals together so they can “have a bigger voice and align behind a common purpose.”

Asked why biodiversity should be an issue for firms, Visser admitted that most of them struggle with the concept, particularly if they have no direct connection with nature. But, as all businesses extract resources and use energy, which is “devastating the natural world and wiping out biodiversity at a frightening rate,” anything to restore nature should be part of business, he said.

Damaging nature is reducing the planet’s ability to regulate the climate and society’s ability to live in a climate-safe space. Moreover, replicating nature’s actions such as cleaning the air or pollinating food is at best, expensive, and at worst, impossible. He pointed to a global assessment showing that the cost of artificially doing just 12 of nature’s many tasks would be three times the global GDP.

By working towards restoring nature, businesses can become part of the solution, not the problem, he said. “If we ignore [biodiversity], no matter what sector you’re in, business will be at risk. Resources will become more expensive and ecosystems will break down, causing disruptions of supply chains.”

Rather than aiming for sustainability—what Visser calls “a mode of surviving”—society should embrace thriving, the concept of regenerating at every level, from nature to individuals and communities, he said. Sustainability is uninspiring, and has set the level of ambition of business and government at a very low threshold, but thriving offers potential.

“For the past 30 years we’ve been doing slightly less harm—but still doing harm—and really not solving many of the most difficult challenges we face,” he said, pointing to issues such as the reduction in extreme poverty yet rise in inequalities and the loss of two thirds of wildlife populations since 1970.

He asked attendees to consider what it would be like to live in a world that is better off because of the existence of businesses, and said the world needs a net positive or regeneration agenda.

All businesses, he added, should be clear on the reason they exist and use it as “a guiding star” in their decision-making process, always cognisant whether each decision takes them closer to, or further away from, their purpose. “The direction of travel is important because if you get the minority moving in the same direction and influencing each other, you end up getting that transformation for the whole society,” he explained.

Ideally, thinking should also be joined up, to support changing the six major breakdowns into breakthroughs. These transitions include resource depletion to resource renewal, and inequality to fairness. Firms providing circular economy solutions, for example, could tackle inequality at the same time, while those working on health might also help create more resilient communities.

In closing, Visser said that embracing thriving rather than surviving recognises the innovation coming from business that will transform the world rapidly. Ultimately, it is a concept founded on hope.

“Hope comes from seeing the possibility for change, understanding that systems can and do change very rapidly and rooting that hope in action—in our own sphere of influence and in others who are taking action,” he said. “Inspired and hopeful people are much more effective in the world … be an optimist because good people are working to change the world.”