Study: UK remains attractive to Japan ahead of Brexit

Written by Sterling Content
July 13, 2018
Past Event Round Ups 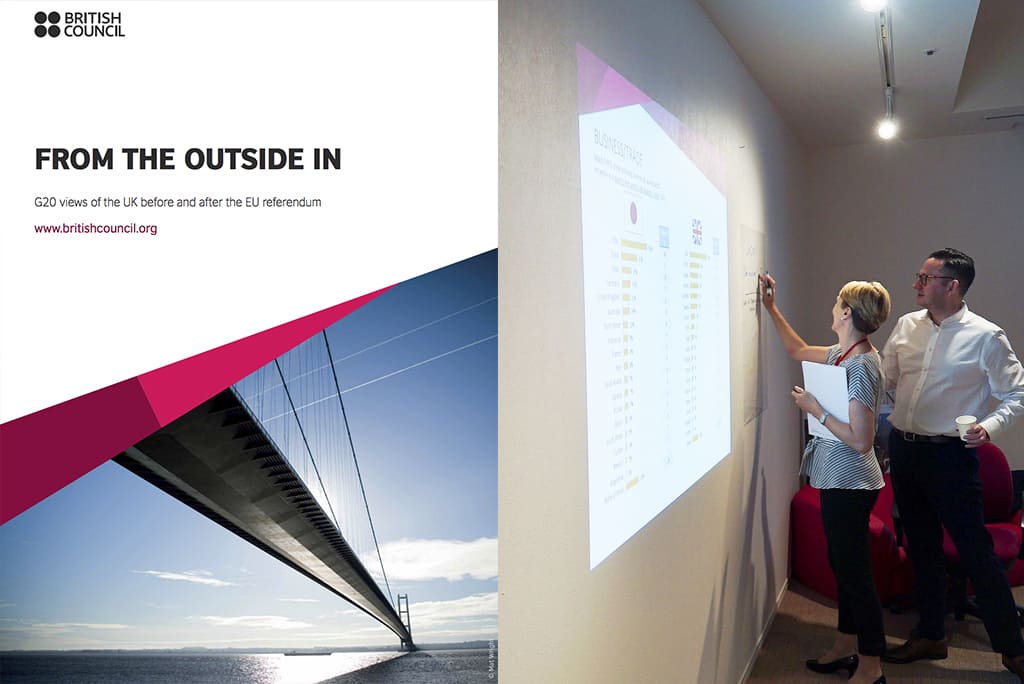 Written by Sterling Content
July 13, 2018
Past Event Round Ups

Young people in Japan are no less interested in, or less likely to engage with, the UK for education, business, culture and tourism following the UK’s decision to leave the European Union (EU). That is according to the results of two surveys by Ipsos MORI, carried out before and after the historic referendum on bloc membership in June 2016.

Matt Burney, director of the British Council—which commissioned the study—delivered the news at a BCCJ event on 20th June. Speaking about the British Council’s report on the study, From the Outside In: G20 views of the UK before and after the EU referendum, he called on BCCJ members to be optimistic about how the UK might be viewed by Japan’s future generations post-Brexit.

About 1,900 Japanese citizens were among the 40,000 people surveyed across the G20 countries. Those chosen had a minimum of secondary school education and were aged 18-34 at the time of the surveys, one conducted in May 2016 and the other in autumn 2016.

“We thought this group was important because they will be the future business leaders and decision makers; it’s important to understand what they think about the UK and other countries,” explained Burney.

Japanese respondents found the UK most attractive (in order of importance) because of its cultural and historic attractions, cities, arts, countryside and landscape, and history.

Meanwhile, in tourism attractiveness, the UK came fifth after Italy, France, the United States and Australia while British respondents gave their preferences as United States, Italy, Australia, Canada and Japan.

Burney explained that the UK’s degree of attractiveness to Japanese respondents had worsened marginally post referendum, shown by the slight loss of percentage points in some categories. But, in some areas, there was no change or an increase in attractiveness. For example, there was more interest in studying the UK, likely to be the result of the possibility of increased spending power due to the fall in the pound.

While there was much media reporting at the time of the surveys about the negative impact that Brexit might have, members noted that the intense media coverage of the UK featuring images of the country may have had a sustaining or positive effect on the second survey, even only to keep the UK at the forefront of respondents’ minds.

In questions about the UK’s membership of the EU, more than a third of Japanese respondents said the forthcoming Brexit had no impact on the attractiveness of the country or their interest and willingness to engage with the UK. About one half said they didn’t know or had no opinion, placing Japan among the most non-committal of all G20 countries surveyed.

However, Burney noted that this is response is not particular to Brexit; previous surveys in Japan commissioned by the British Council also found respondents to be less forthright in their views than those in other countries.

The high level of trust that Japanese and British respondents reported in each other’s government, institutions and people in the first survey was unchanged in the second survey. According to Burney, this high level of mutual trust is a “strong foundation on which the British Council can take forward relationships.”

Trust is important, he explained, because the more trust people have in the UK, the greater the likelihood that they will study, travel or do business in the UK.

“By engaging in a dialogue with the countries in which we operate, we try to build that trust through culture, art and the creative industries; English language and teacher training; and the promotion of study abroad programmes,” he said, adding that British Council studies show a direct correlation between the number of British cultural interactions a person has and their level of trust in the UK.

The surveys also show a convergence of views on the most important issues facing the world. Both Japanese and British respondents ranked extremism, terrorism and armed conflict, poverty, migration, and climate change and the environment as their top five concerns, albeit in a different order of priority.

Members noted the marked dip in the attractiveness of Brazil in the second wave of the survey. While some admitted this may be the result of the country’s political and economic turmoil in the summer of 2016, others suggested it may be the fallout of the extensively reported challenges Brazil faced in hosting the 2016 Olympic and Paralympic Games.

To the organisers of Tokyo 2020, members said global sporting events should be seen as a double-edged sword, with potential to boost the host country’s soft power in the case of success but damage its global standing in the case of difficulties.