Written by Sterling Content
November 7, 2017
Past Event Round Ups 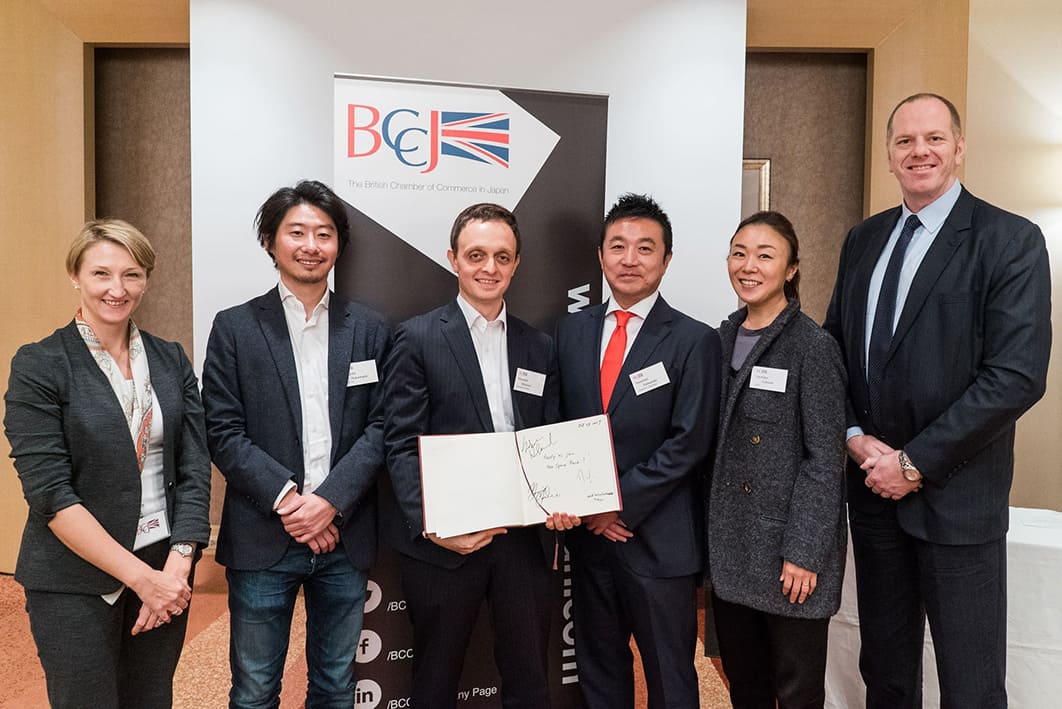 Written by Sterling Content
November 7, 2017
Past Event Round Ups

Governments might have started the space race, but businesses worldwide are now racing to conquer the final frontier. With the global space industry currently worth more than £250 billion, including around £12 billion per year in the UK, the business of space has become increasingly competitive as new entrants strive for the stars.

On October 24, the BCCJ hosted in Tokyo a panel discussion entitled “Ready to join the Space Race?” featuring two Japan-based start-ups, Axelspace Corporation and ispace, Inc. The session was moderated by BCCJ individual member Mandali Khalesi, an award-winning British technology executive in Japan and the UK.

A December 2016 report by the UK Space Agency reported total income for the UK space industry of £13.7 billion in fiscal 2014-15, mostly from the private sector. The industry contributed £5.1 billion gross value-added to UK economic output in the same period, employing more than 38,500 workers directly and 113,000 workers indirectly.

Welcoming attendees to the luncheon, Paul Ellis, first secretary defence, security and civil aerospace at the British Embassy Tokyo, described space as an area of “great strategic importance to the UK government.”

“It’s important not just for the economy, but for public services, national security, science and innovation, and it’s an area where the UK has played a leading role for many years,” he said. “When you look at the impact on areas such as telecommunications, navigation, Earth observation, meteorology, more than £250 billion of the UK’s non-financial economy GDP is supported by satellite services. This shows how the sector is a growing area of importance.”

Fostering start-ups and international collaborations in the field of space is therefore a key focus for the UK government.

He noted that ispace is one of only five teams remaining in the global race for the Google Lunar XPrize, competing as Team Hakuto in the challenge to successfully land a spacecraft on the moon’s surface, navigate a robot to travel 500 metres and then transmit high-definition video and images back to earth.

Meanwhile Axelspace was described as “a disruptor in the remote sensing and micro- and nano-satellite field,” aiming to start operation of a series of microsatellites in low earth orbit in 2018.

Axelspace’s brand manager Yasunori Yamazaki described Axelspace as a company that is “democratising” space through its microsatellites, which weigh less than 100kg compared to larger conventional satellites, which can weigh up to 3000kg.

The company monitors Arctic sea ice for transportation companies, which rely upon its weather data.

“Unfortunately with climate change, the ice is decreasing every year … but this creates opportunity. For example, shipping companies travelling from Japan to Western Europe usually go via the southern route. Using the North Sea route shrinks the distance, which translates to shorter delivery times and fuel savings,” he said. By using Axelspace’s weather data, the companies can make informed choices on which routes to choose.

Mr Yamazaki described the firm’s second disruption as more ambitious, in allowing customers to access space-derived data without owning their own satellite.

“In Japan, you can easily rent a car now via timeshare … this is the same concept. We will be launching 50 spacecraft into orbit by 2022, at 600km altitude,” he said. “What this will allow is for users to utilise our data anytime, anywhere and as frequently as they wish at incredibly low cost.”

Mr Yamazaki pointed to potential applications including in agriculture, such as helping farmers to reduce crop wastage, or in monitoring ports to determine trade data. Having celebrated its ninth anniversary in August, the Tokyo-based firm has grown to around 45 employees.

Asked to define its competitive advantage, Mr Yamazaki said his firm was creating PCs instead of the current “supercomputers” in the industry, slashing costs to one-hundredth of the norm, and using computers to analyse data.

ispace’s founder and CEO, Takeshi Hakamada, said his company has almost secured the equivalent of around £7.5 million for the cost of its mission through its first challenge of launching its rocket to the moon as part of the Google competition by late 2017.

Mr Hakamada said Team Hakuto has the advantage of working with robotics expert, Dr Kazuya Yoshida in the race against competitors such as TeamIndus, India’s first private aerospace startup.

“Tohoku University’s Professor Yoshida is an expert in robot technology … we have a huge amount of experience behind our team,” he said.

“We are developing a very small robot, which is possible because of sophisticated Japanese manufacturing technology. Without that technology we could not achieve such fine manufacturing of our robot.”

However, ispace’s larger vision is “to create an economy in space,” starting by mapping potentially valuable resources on the moon by sending up small spacecraft.

“We already know there is water on the moon. We aim to find it, extract it and create fuel for rockets and spacecraft from the hydrogen. Resource harvesting will take a long time — on Earth it’s about 10 years — but we aim to start space resource development by around 2030,” he said.

The Tokyo-based firm is also internationally minded, with overseas offices in the United States and Luxembourg.

Mr Hakamada said commercial partners such as Japan’s KDDI could benefit from both marketing opportunities and technological cooperation, such as designing advanced mobile communication technology for space travel.

Both companies noted that a regulatory system which facilitates investment is crucial for new operators.

“We’re actively talking to the UK Space Agency,” said Mr Yamazaki, adding that “the UK’s space regulatory framework is favourable even for a small company like us.”

With the UK’s industry taking off, Japan’s start-ups could become key collaborators and disruptors as mankind takes a giant leap into space.