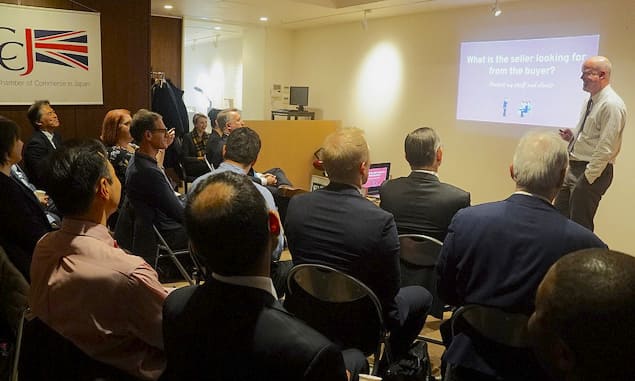 The BCCJ’s Small is GREAT events have showcased entrepreneurs from across all sectors since launching in 2011, but the latest in the series was a first: the story of a small business owner turned salaryman at a Japanese corporation.

Richard Straughan has been corporate business development manager at Rosetta Stone Learning Center since 2018, when parent company Link and Motivation Group absorbed his firm, PEAK. He shared the ups and downs of his journey and the lessons it has taught him, at the BCCJ office in February.

Born and raised in the Scottish Highlands, Straughan said he developed wanderlust at a young age as his hometown offered “little more than farming and whisky.” After accepting a graduate role at a large company in Scotland, he trained as a business language teacher and set off for Germany to work for a business English teaching franchise.

But he was eager to see more of the world and soon set his sights on Japan, arriving in Tokyo at the age of 25. A year later, he was offered a Director of Studies position with the firm.

After five years, Straughan headed back to Europe, this time to France, to experience life in a third foreign country and work for a small firm. Serendipity played its part and he became manager of the school, of which he got a small share. According to Straughan, it was “an incentive and offered a great opportunity” as he could “manage a company without financial risk.”

He grew the business, expanding from four staff to 48, before returning to Tokyo to set up his firm, PEAK, which he hoped would cater to the many corporations in the capital seeking corporate English language training.

Thanks to a contract from a large financial organisation, PEAK gained clients and referrals from other financial firms quickly in its first two years of business.

But, with such reliance on the financial sector, PEAK lost 90% of its business in two months as a result of the 2008 global financial crisis. To keep the firm afloat, he was forced to make his entire staff of 12 redundant and work solo for little or no salary for more than a year.

“I battened down the hatches,” he said of the experience, adding that he is glad he didn’t give up as he “built the business back up, step by step.”

Ten years later, in 2018, Straughan was approached by Dean Rogers, CEO of Dean Morgan K.K. (a Link and Motivation Group subsidiary), which had acquired Rosetta Stone Learning Center in 2017, to absorb PEAK and expand its corporate language training portfolio. The challenge of arranging a sale began.

“I had no idea how much my company was worth,” Straughan admitted. Given PEAK’s size, he was told “it is only worth what it is worth to you.”

He pointed out that, as the system in Japan provides little incentive for firms to make a profit, the biggest concern for Link and Motivation was not turnover or P&L but length and retention of contracts. Other critical checks were that PEAK’s success was not dependent on just one person, that it would be possible to lock-in a longer-term commitment with Straughan for at least a few years, and that PEAK’s finances were in impeccable order.

Link and Motivation, Dean Morgan’s parent company, were considering PEAK—complete with Straughan’s expertise—as a “seed company” within the Rosetta Stone Learning Center Business from which to grow something bigger, he shared. Meanwhile, his priority was the protection of his staff and clients if he were to give up being a business owner.

“I needed to remain incentivised as I was not interested in just taking a salary or short-term gain, so I sold the company for a stock-related incentive program,” Straughan explained. “I sold them me, my entire staff and my entire client list, so I didn’t want them to change the conditions for clients or staff – loyalty is really important, so I had to guarantee that.”

“I told my staff that nothing would change; they would still report to me. And, as I had a good relationship with all my clients, I asked them to trust me,” he added. As a result, all of his clients made the switch.

Having completed one year in his current position – the first time he has worked for a large firm in more than 30 years – he sees the pros and cons of the buyout.

As he is head of the corporate training unit of the business for Rosetta Stone Learning Center, he finds his day-to-day work similar and can leverage the corporate contracts within the group, making sales efforts easier. He also appreciates the security, financial incentive and opportunity to work with new people that the move has provided.

“I’m learning a lot,” he said of his new job, adding that as an entrepreneur you can be “in your own bubble, do things your own way and stop thinking of new ways to do things.” His corporate role, meanwhile, has allowed him to “freshen up” his thinking and skills, even though he does not always agree with everything he sees.

In addition, Link and Motivation has a unique tool called “Motivation Engineering” which has been hugely successful in its consulting businesses within the group. Straughan feels there is great potential to apply the methodology to language learning.

Though enjoying his new challenge, Straughan says that not everything has gone entirely smoothly. There are the occasional “meaningless meetings”, he laughed.

“It’s difficult to fit my way of working into the way of a massive company. Some things don’t make sense to me and the speed of response is different; PEAK, due to its size and single owner was much nimbler,” he said.

Still, he said he has not found the transition from entrepreneur to salaryman as difficult as he thought it would be.

Reflecting of his dramatic work shift, he said, “I think the move is one of the most entrepreneurial thinks I have ever done in my life because I never thought about doing it before. As such, it was a huge change of environment for me.”

After considering the buyout for three months, he says he made his decision, never questioned it thereafter and has no regrets.