Written by Sterling Content
November 25, 2022
Past Event Round Ups

Written by Sterling Content
November 25, 2022
Past Event Round Ups

In recent years, global supply chains have been impacted by dramatic shifts including increased decarbonisation and the trade war initiated against China by former US President Donald Trump. The outbreak of the novel coronavirus and the subsequent pandemic exacerbated existing geopolitical, economic and environmental challenges globally, putting further pressure on supply chains. Russia’s invasion of Ukraine and the subsequent sanctions on Russia have added to the woes facing the business world.

With Japan and the Indo-Pacific caught in the middle of many of the crises, how can companies respond and prepare for future disruption?

According to Takuji Okubo, managing director of Japan Macro Advisors, it is important to understand the cause of the supply chain disruption in order to understand how future trade, production and distribution of goods will be affected.

Setting the scene, Japan Macro Advisors’ Okubo showed the Global Supply Chain Pressure Index published by the Federal Reserve Bank of New York, highlighting how badly the global supply chain has been disrupted since the outbreak of the novel coronavirus in 2020 and Russia’s invasion of Ukraine in February 2022.

Rather than geopolitical conflict, Okubo said the more important factor has been China’s lockdowns in response to COVID-19.

“China accounts for the majority of ports activity, so its shutdown of ports and cities had a major impact on the supply chain,” he said.

For example, China was home to seven of the world’s largest ports in terms of trade volumes in 2018, with Shanghai topping the list.

He also pointed to a shortage of semiconductors, which has affected a number of industries, including Japan’s key auto and electronics sectors, as one of the key factors affecting supply chain disruption. These industries faced a “severe” shortage in the first three quarters of 2021, with the situation only starting to return to “normal” in the second quarter of 2022.

In comparison, Russia’s invasion of Ukraine was a less important factor for the recent supply chain woes, he said.

NUS’ Palit pointed out that supply disruptions prior to COVID-19, such as Hurricane Katrina (which hit New Orleans in 2005) and other natural disasters, only had short-term impacts.

“What we’ve seen in the COVID era is much more extensive disruptions to supply chains,” he said. “A strategy needs to be devised for addressing the lack of resilience in key national industries such as pharmaceuticals.”

CCCJ’s Nagy noted the increasing trend towards “reshoring” (a process of returning production back to a company’s original home country) and “friend-shoring” (moving production to “friendly” countries) as a means of insulating supply chains.

In a June 2022 survey by the European Union Chamber of Commerce in China (EUCCC), 23% of Western firms said they were considering moving operations outside China, while 50% reported business had become more politicised.

“Increasing numbers of European businesses are putting China investments on hold and re-evaluating their positions in the market as they wait to see how long this uncertainty will continue, and many are looking towards other destinations for future projects,” the EUCCC said. 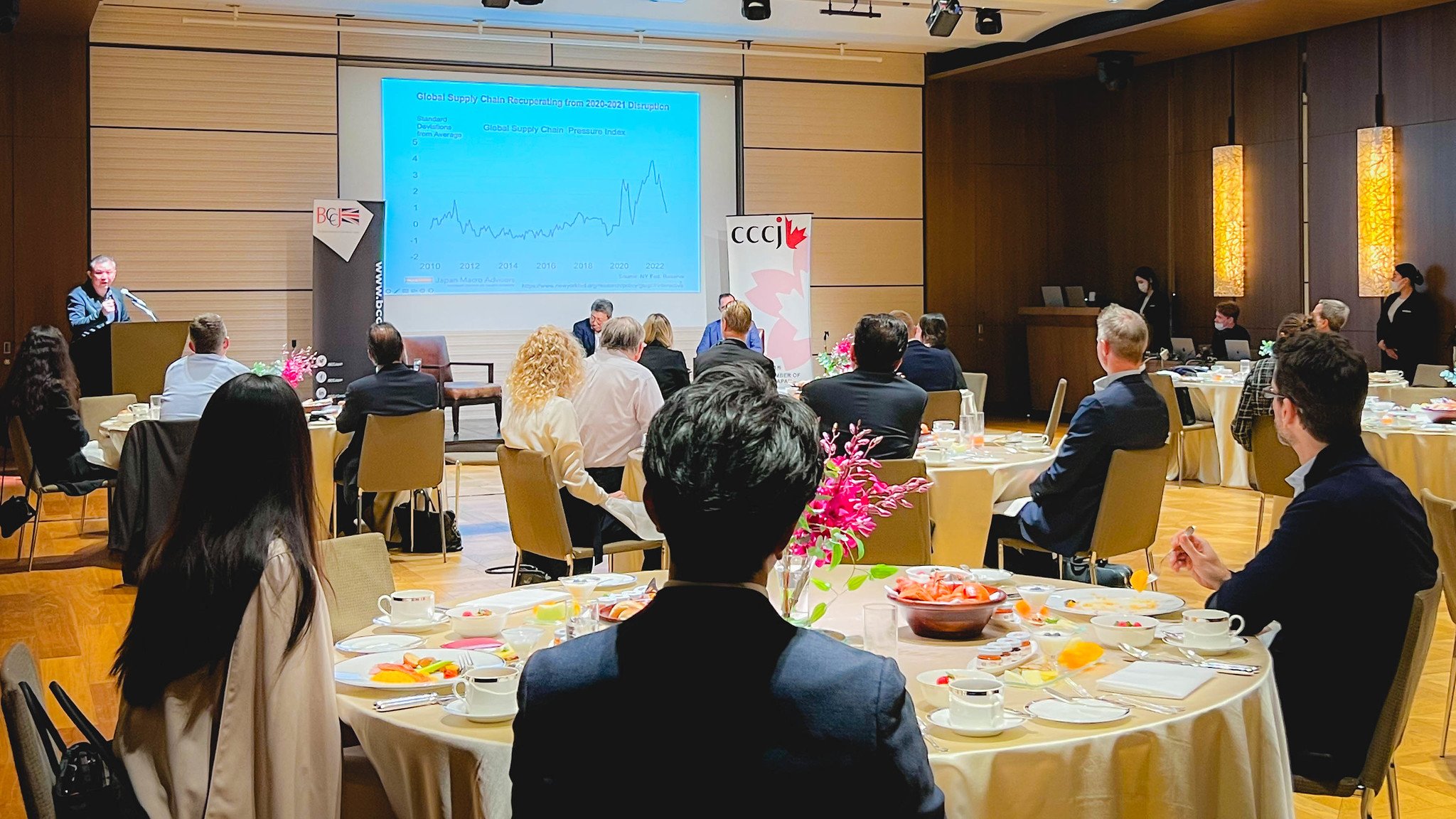 In Japan, companies such as cosmetics maker Shiseido have invested in new domestic plants, although a tight labour market is seen restricting any wholesale move by Japanese companies back home.

Asked about global trends, Okubo pointed to the importance of the US–China relationship, with a key risk being a crisis over Taiwan.

“Governments in the US and Japan are telling businesses that they may have to restrict imports and exports with China at some point in the future … it could be as early as 2025. Yet if you are managing any large manufacturing company, it would seems like an impossible ask,” he said.

“China is a behemoth in the global supply chain. How can we continue doing business if we stop importing goods from China? This is a key issue for large manufacturers to address,” he added.

Palit said governments faced a challenge convincing businesses that they understood supply chain management “better than businesses.” He questioned the potential impact of government policies, stressing the need for businesses to be proactive in engaging with government.

Nagy noted that Japan’s exports to China in 2021 exceeded US$200 billion (£165 billion), making China a market that would be difficult to “decouple” from.

Nitto Denko’s Mizumoto concurred, saying it would be extremely difficult—and expensive—for many companies to decouple from China, although there is a need to mitigate against potential geopolitical risks.

Asked about preparing for contingencies such as a Taiwan crisis, Okubo said Japanese corporate management could be exposed due to lack of experience of such events.

“The idea of major conflict coming close to Japan is very foreign to [Japanese business executives] so they are not at all used to thinking about it. Preparing for contingencies is generally a weak point for Japanese companies, as they like to go with the flow,” he said.

Nagy pointed to the benefits of regional trade agreements such as the Comprehensive and Progressive Agreement for Trans-Pacific Partnership (CPTPP) and the Indo-Pacific Economic Framework for Prosperity (IPEF) as helping to set the rules and standards in the region.

“These agreements are all about market access; governments need to support businesses operating in the region as an investment, not a burden,” he said.

Questions from the floor covered a wide range of topics including how companies can cope with rising costs due to inflation and how best the British government can play a role in supporting businesses in the region, to which Okubo suggested Japan and the UK could work together in an effort to prevent US–China relations from worsening further, or at least to slow the pace of its deterioration..

Concluding the event, Nagy noted the high degree of integration already present in the Indo-Pacific region. An example he cited was the iPhone, whose various components are supplied from various Asian countries and combined with software from California.

“It’s important for businesses to think about structural issues, develop contingencies regarding geopolitics and build resilience into business systems, including for natural disasters and any future pandemic,” he said.

In each and every interaction, individuals unconsciously reinforce, accept or challenge societal nor ...