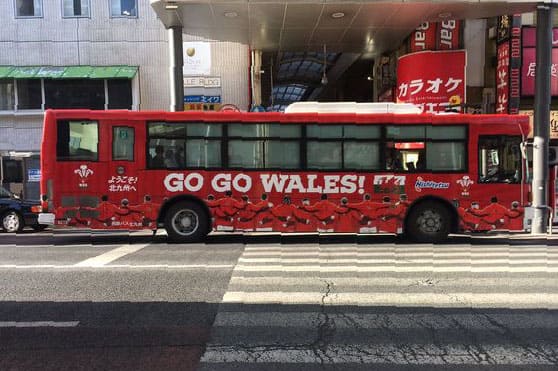 With two weeks to go until the kick-off of the Rugby World Cup (RWC) 2019, Welsh Government representatives to Japan are ramping up their efforts to build ties between Wales and Japan during the six-week global sporting event.

Work began in earnest in 2018 following the confirmation that Kitakyushu would become the Welsh side’s training base. With involvement from the Welsh Government, Welsh Rugby Union and local partners, residents have been introduced to Wales through events, activities and visits from the national squad. Reflecting their positive interactions with the nation, it is expected that residents will “turn the town red” next week to welcome the Wales team.

In commerce, British and Welsh Fairs will be held during September and October in a number of cities that will host Wales’ pool stage matches, including Kumamoto and Oita. Some of Japan’s largest department stores are among the hosts, which have expressed confidence that Japanese people are keen to buy goods from Wales and the wider UK.

The fairs are expected to focus on the sale of iconic food and drink products from Wales, such as lamb and blue lobster, as well as items like Welsh gold, fabric and crafts. Welsh Government representatives to Japan are connecting store managers with current importers as well as with new products in the hope of building further ties for long-term trade.

Residents, meanwhile, are being encouraged to visit the fairs, not only to browse and shop, but also to learn about Wales as part of awareness- raising activities.

Work is also ongoing to develop links between educational institutions in Japan and Wales.

Some 20 children from a Super Science High School in Tokyo visited Cardiff University to learn about several of its departments. So successful was the visit that efforts are underway to extend the programme to pupils in Beppu, Kyushu, too. Another host of the Wales team, Kitakyushu, is developing connections with elementary schools in Cardiff.

During the RWC 2019, David Anderson, head of seven museums in Wales including National Museum Wales, will deliver lectures at the University of Tokyo and Oita Prefecture Arts Museum and visit the governor of Oita as part of efforts to build on RWC excitement. Items produced by Welsh artists will also be on display at the Oita museum.

Wales as a destination

Again, building on the excitement surrounding the RWC, October will see the official twinning ceremony of UNESCO World Heritage Sites Conwy Castle and Himeiji Castle. It will mark the completion of the first and only castle twinning between Wales and Japan, building on the 2018 visit of Himeji local government representatives to Conwy to sign a memorandum with their local counterparts to start the twinning.

During the tournament, Llandudno’s Lord Mostyn will also visit Japan to help promote tourism between the two nations. A fan of Japan, Lord Mostyn has established a tour of his gardens followed by Welsh tea on his 6,000-acre estate in a bid to attract Japanese tourists and has been featured on NHK.

A number of Japanese magazines and TV programmes are also scheduled to introduce Wales before and during the RWC as part of efforts to introduce all competing teams. Features on Wales will include the themes of Alice in Wonderland and Thomas the Tank Engine, which were created in Wales, as well as the nation’s strong history of mining.

It is expected that increasing awareness of Wales in Japan will boost not only tourism to Wales, but also purchases of Welsh products and greater commercial, educational and cultural links between the two nations.