British Chamber of Commerce in Japan (BCCJ) members learned of responses to COVID-19 in northeast Asia on April 27 via another multi-nation webinar. Representatives of the Japan, Taipei and Korea chambers of commerce shared details of government activity and business sentiment in their respective countries in the interactive session.

BCCJ President David Bickle introduced the University of Oxford’s COVID-19 Government Response Tracker, which tallies indicators of government response to produce a country stringency index ranging from 1 (less stringent) to 100 (most stringent). As of April 17, France tops the index with 100, while the UK sits at 71 and Japan at 67.

Japan has gradually stepped up its response to COVID-19 since the first case was reported in January, moving from contact tracing individual cases to more widespread measures such as the closure of schools.

With an uptick in cases and related deaths in March, the government decided to deny entry to visitors from 73 countries and regions from April 3. Soon after, Japan declared a national state of emergency (due to end on May 31) calling on non-essential shops to close and people to reduce social contact and telework where possible.

As of April 26, Japan had 13,182 confirmed cases, although testing for COVID-19 remains limited nationwide.

To support individuals affected by the crisis, the government has created a ¥117trn stimulus package that will provide ¥100,000 to every individual. Businesses can also benefit from measures designed to cushion the economic blow, including wage subsidies; grants; no-interest, no-collateral loans and deferred tax measures. 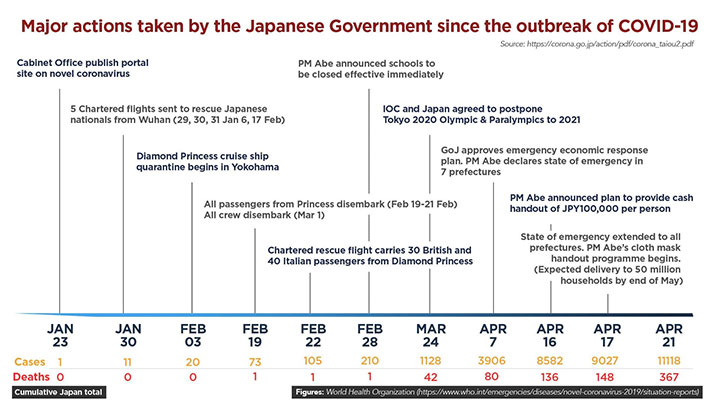 BCCJ members surveyed in April reported being negatively impacted by the crisis, with just over one fifth of respondents forecasting more than a 40% drop in revenue and net profit this year. Respondents reported difficulty in forecasting, a decrease in demand for products or services, a decline in financial performance and operational challenges due to remote working.

With only 428 confirmed cases and six deaths as of April 26, Taiwan is one of the safest places in the world now, according to Steven Parker, CEO of the British Chamber of Commerce in Taipei.

Parker attributes the low figures to lessons learned from SARS, which badly hit the island in 2003. Even before Taiwan’s outbreak of COVID-19 on January 21, the government was well prepared and on high alert. Furthermore, Vice-president Chen Chien-jen, a renowned epidemiologist, ensured the government took the threat seriously.

Health screenings began on December 31, followed by mask rationing to ensure supply in the neediest places in early February. Schools were then closed, and on March 1, travel bans were put in place.

The public was given daily briefings from the Centers for Disease Control. Non-COVID-19 health concerns were treated outside hospitals and home quarantine was detailed and implemented quickly. Military personnel took over administrative roles in hospitals, freeing up medical staff to care for patients and make policies.

Alongside crisis management at home, Taiwan is supporting the global fight against COVID-19. Officials have shared information with sister cities, produced standard operating procedures in Chinese and English for use by the international community and supplied masks to numerous countries.

Taiwan is expected to miss much of the crisis’ economic fallout. Expected economic growth for 2020 has been revised from 2.7% to 0.5–1.5%, even as much of the world will see negative growth.

A survey by Edelman shows firms have so far seen a drop of 5–50% revenue, depending on the sector. Respondents reported postponing projects until next year or avoiding staff recruitment in the short-term. SMEs, meanwhile, have experienced difficulties adapting to remote working.

Those polled also reported a need for greater government support, such as subsidies or tax breaks. Economic measures currently in place include rent reductions, interest rate cuts and price reduction for essential items.

Immediately, the government moved into alert level 1 and began preparing for a worsening situation by producing COVID-19 detection tests. Following a spike of infections in mid-February, the government called for social distancing. Overall, the public complied in earnest, even without a declaration of a state of emergency or lockdown.

Efforts have focused on a system of testing, tracing and treating. Drive-through testing facilities and phone booth-style testing units have enabled the testing of about 600,000 people to date, an extremely high degree of testing per head of population.

Technology has enabled detailed contact tracing. People share their personal data on where they have been and who they have met via apps. When a COVID-19 case is discovered, the data is used to contact anyone who may have been in contact with the infected person and invite them for a test.

South Korea also introduced mask rationing and has been very well equipped with PPE, even exporting it to help other countries battle COVID-19.

A survey of BCCK member firms shows that the impact of the crisis is widespread. Almost 70% of respondents have been significantly affected. Half reported a drop in revenue of 10% or more while one third reported a drop of less than 10%.

Of measures taken to offset the financial impact of COVID-19 (multiple responses allowed), most popular so far have been cutting unnecessary costs (88%), adjusting 2020 budgets (75%), and implementing a hiring freeze (63%). Almost 40% of firms said financial measures from the government would help with the offset.

Despite the crisis, long-term business sentiment remains positive in northeast Asia, with British firms’ interest in the region set to continue.

Three out of four BCCJ members surveyed who expressed a view expect the scale of their business to be the same or larger in two years’ time, while 40% of BCCK respondents expect their business to recover within six months. In Taiwan, more than half of firms polled feel positive about their five-year business outlook.