Written by Sterling Content
February 22, 2018
Past Event Round Ups 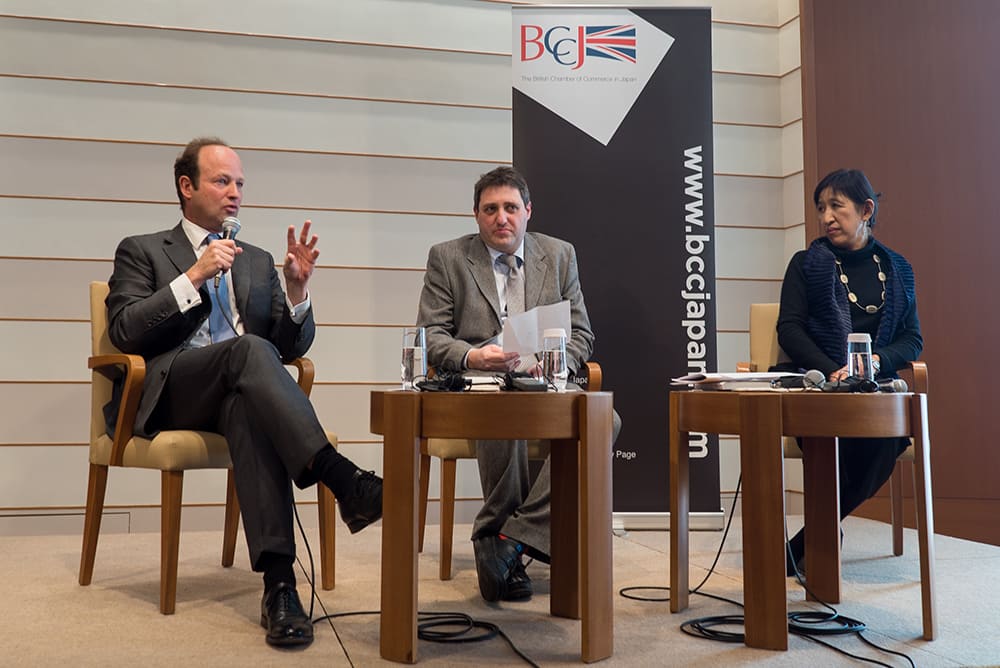 Written by Sterling Content
February 22, 2018
Past Event Round Ups

The importance of reputation, for both the success of organisations and the professional growth of individuals, cannot be underestimated according to an expert panel who addressed BCCJ members at a luncheon on 5th February.

Rupert Younger, co-founder and global managing partner of BCCJ Corporate Member Finsbury, explained that reputation is about much more than merely corporate communications or how a firm is featured in the media. It “confers significant business advantage” and is “a real asset” on which individuals can build their career, he said.

“If you think about reputation as the oil that underpins the engine of any economy, it’s fair to say that reputation has value whenever there is information uncertainty. If you don’t know enough about your counterparty, their reputation becomes the piece of knowledge on which you base your decisions,” he added.

Younger, who is also founding director of the UK’s Oxford University Centre for Corporate Reputation, pointed out that this idea can be seen in a wide range of industries. For example, in the investment market a price-earnings ratio is a measure of a firm’s reputation while, in the talent market, an organisation’s reputation is an increasingly important consideration for jobseekers (and of greater priority than salary for millennials surveyed). Similarly, in market regulation, regulators with limited resources investigate firms that they perceive may warrant such investigation.

Younger’s research for his book, The Reputation Game, identified three key mechanisms by which you can engage with your reputation. First is behaviour; second is networks and third is your narrative.

In delivering narrative to build reputation, Younger said organisations should be mindful that “the art of telling a story is super important today.”

“Remember that communications is a dialogue, otherwise it is just transmission and propaganda,” he said. “If you’re really going to be successful, be curious, engage, ask what [customers] are interested in, be responsive to that and then create a story around what actually matters.”

Rather than trying to communicate everything about the company at once, he suggested using messages tailored to each situation for more effective communication.

Tokyo-based freelance journalist Michiyo Nakamoto agreed that storytelling is vital in building a positive reputation but reported that, during her 25-year tenure as Tokyo correspondent for the Financial Times, many Japanese people and firms had failed at the task due to a lack of communication skills.

Reflecting on her time spent interviewing Japanese executives, Nakamoto said: “Most of the time they didn’t really tell me anything. They would give me a lot of information and they were very polite but there was no message. I quite often thought, what is the message that these companies want to convey to the rest of the world?”

She advised that Japanese firms—or any firm keen to improve their communication—think about their strengths and how they can be easily conveyed to their customers and business partners. Any organisation should be able to say, “This is what I do, and this is why you should trust me,” she added.

According to Younger, it is possible for each individual or organisation to have numerous reputations. A firm may be known as a good place to work but a bad place for innovation, for example, and “different aspects of reputation can happily coexist within every organisation,” he said.

Moreover, there are two dimensions of reputation—competency and character—that underpin most reputations in the world, according to his research.

The significant theft of cryptocurrency in late 2017, for example, dented the reputation of Bitcoin from a competency perspective as the public questioned its security and technology. Meanwhile, the 2015 Volkswagen emission testing scandal was a crisis for the firm from a character perspective.

While Younger pointed out that each type of crisis had a very different impact on each organisation, moderator and Financial Times’ Tokyo correspondent Leo Lewis said that, in the early stages of a scandal, the “distinction between character and capability [crisis] is often not easy.”

Younger agreed that the two can converge. In the case of the BP oil spill in the Gulf of Mexico in 2010, he pointed out that what began as an issue of whether BP could secure a problematic well became an issue about its “arrogant or out-of-touch culture” as it failed to react or explain its actions adequately.

When correcting a reputation crisis, this explanation is crucial, according to Lewis. Yet Japanese firms tend to present solutions to a problem at a much later date as a “fait accompli” rather than tell the public how the problem is being addressed at the time, he said.

Speaking of the impact of a reputation crisis, Younger said his research shows that capability hits are a greater blow to an organisation than are character hits.

“If you are found to be not able to do the business that you are purporting to do, that is much more damaging. It primarily affects customers whereas character [damage] primarily affects counterparties, be they investors, employees, regulators or suppliers,” he added.

More than 25 years ago, Nakamoto said Japanese companies were seen as “stars”, with great interest in them among Financial Times readers. However, she believes that, despite great successes, Japanese organisations have been unable to communicate effectively their value to the world, leading Japan to “gradually become an afterthought to many people” worldwide following the bursting of the country’s bubble economy.

One symptom is the many firms that enjoy a solid, established reputation in Japan yet struggle to expand internationally because of a lack of awareness of them outside Japan. She appealed to staff at Japanese organisations to start thinking about having a message to convey.

“Just laying out the facts is not going to get your message across … there seems to be this view [in Japanese companies] that the facts will speak for themselves, but that is really risky because they won’t,” she said.

As with any communication, the panel noted the right message for the right audience at the right time is key for to building and maintaining a good reputation.