Written by Sterling Content
April 26, 2019
Past Event Round Ups 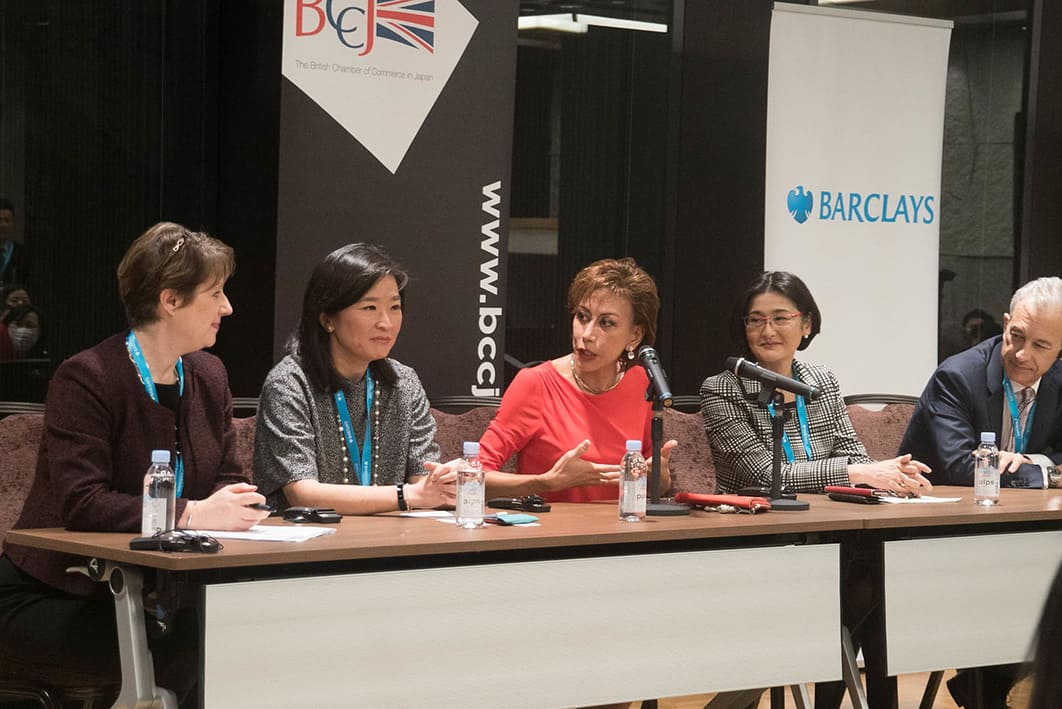 Written by Sterling Content
April 26, 2019
Past Event Round Ups

Womenomics is working, but it needs to be linked with greater profitability to maintain momentum in the long-term, according to a panel of D&I experts at an event marking International Women’s Day.

Presented by the BCCJ, Barclays and Sumitomo Mitsui Banking Corporation (SMBC), the headliner event was held on March 8, a global day celebrating the social, economic, cultural and political achievements of women.

As the day also marks a call to action for accelerating gender parity at work, guest speakers considered Japan’s progress to date and how their organisations are changing the status quo.

“A serious decline in the working age population is forcing us to challenge our working culture, which has been deeply rooted in Japanese society for many years. Promoting new initiatives requires changing the culture of society and corporations,” he said.

Yet, Oshima shared that organisations, including SMBC, are introducing initiatives to promote a more gender-inclusive workplace. An executive-level D&I committee is held at the bank every six months to ensure delivery of a D&I mandate, which Yoshida believes is essential to ensure SMBC “acquires, retains and develops talent.”

Meanwhile, in the UK, SMBC is one of the signatories of HM Treasury’s Women in Finance Charter, a pledge for gender balance across financial services. The firm is targeting 30% female representation in senior positions by 2023.

Such activity can be seen across businesses, said Takako Masai, a member of the policy board of the Bank of Japan.

More women in the workforce

In her keynote address, Masai explained that Japan’s Act on Promotion of Women’s Participation and Advancement in the Workplace, which was enacted in April 2016, has created a mandate for business entities to make goals related to D&I. Under the act, central and local government as well as private sector corporations with more than 300 staff are required to devise and disclose action plans to improve gender equality internally.

“With full enforcement of the act, Japan has entered a new stage of women’s participation [in the workforce], which is at the centre of the Japanese government’s revitalisation strategy,” she said.

This is evidenced by the increase of women in the workforce, despite the drop in working population over the past five years. Even more significant, working women of childbearing age are on the rise, unlike in the past when women left the workforce permanently on starting a family.

But Masai said presenting women as a solution to Japan’s shrinking workforce is no longer enough. Instead, women’s participation needs to be associated with improved competitiveness, productivity, innovation and, ultimately, profitability.

“We have a good economic situation, tightness of the labour market, awareness of diversity and inclusion—there is a strong tailwind for us women,” she said. “But it will be difficult to make the women’s empowerment movement sustainable in the long-term unless companies come to think that it will lead to business success.”

Moderator Sue Kinoshita, Minister Counsellor for Economic Diplomacy at the British Embassy Tokyo, pointed to McKinsey&Company’s 2018 report “Delivering through Diversity”, which found that firms in the top quartile for gender diversity on executive teams were 21% more likely to outperform on profitability.

For panellists Haruno Yoshida, co-chair of the W20, and Paul Lirette, president of GlaxoSmithKline Japan, the potential for profitability is clear, but needs to be communicated more widely.

They shared that, to date, it has been largely men who have created and sold products to women in Japan but, if women were to step into those roles, the result would be new products and increased turnover.

Kinoshita asked the panellists to consider solutions to Japan’s lacklustre steps to address gender balance in companies’ senior management or boards. As of October 2018, only 3.8% of company board members were women, up 0.5% on the previous year.

“Progress is slow because the execution is clunky,” panellist Vanessa Koo, head of banking APAC at Barclays, said of hiring processes. In finance, for example, graduate intake is almost equal in terms of men and women but, as the years progress, women tend to leave the workforce at a higher rate than do men.

“At senior leadership levels, the ratio may be 75% or 80% men to women. When there is an open position, the hiring manager will hire someone they know—so normally a man. It’s not mean-spirited, just a tendency to fall back on the familiar,” she explained. To combat this tendency, each senior position at Barclays International requires a diverse line-up of candidates.

Rather than implement quotas, the panellists suggested mentoring to empower women to seek and seize professional opportunities. Koo, who has had mentors throughout her career, advised that an effective mentorship is two-way; the mentee needs to provide adequate information for the mentor to offer support.

Lirette said that men are among those who mentor women at GSK, to be “part of the solution.” He also shared his journey to build a “speak-up” culture in the company, whereby people respect and embrace different opinions. “If everyone can work as oneself, regardless of gender and age, it should enhance diversity in the leadership team,” he said.

Demonstrating the uptick in mentorships in recent years, Yoshida said that when mentorships for the Female Executive Network at Keidanren were introduced four years ago, members said they were too busy. Now, it is highly desirable to be a mentor, to provide access to networks and influence that could advance women’s careers.

In closing, BCCJ members were invited to support collective action and shared responsibility for gender parity to help deliver the goal of International Women’s Day 2019: #BalanceforBetter