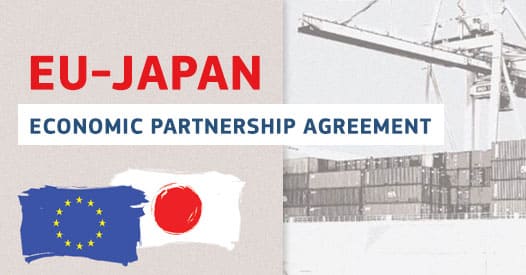 THE EBC WELCOMES THE SIGNATURE OF THE EU-JAPAN ECONOMIC PARTNERSHIP AGREEMENT AND LOOKS FORWARD TO ITS SWIFT IMPLEMENTATION DURING THE BEGINNING OF 2019
Tokyo, 23 July 2018

After having concluded the negotiations in December last year the Governments have moved ahead with their respective process. The EBC now anticipates the approval by the Diet and the European Parliament for the agreement to enter into force by the beginning of 2019 which will immediately remove 90% of all tariffs between Japan and Europe bringing lower costs for consumers and new business opportunities driving job creation.

Danny Risberg, the Chairman of the EBC, states, “The signature represents an important milestone in the economic relationship between the EU and Japan. Companies of the respective regions have invested heavily and look forward to strengthen their presence in their respective markets. With the EPA the EBC hopes that the synergies will further increase and that both parties will prosper, not only as industries, but also as societies.”

The EBC has long been a proponent of a free trade agreement between the EU and Japan and was the first European business organisation to call for such an agreement back as early as 2006.The EBC and its members, with its yearly publications of white papers among others, have been heavily involved in the all the steps leading up to this moment, supporting the EU Commission with detailed technical information of both requests and explanations of the issues faced by European industry in Japan. The EBC believes that this task does not stop with the signature or even the entry into force of the agreement but will continue to carefully monitor the implementation to make this a truly successful and ground-breaking agreement.