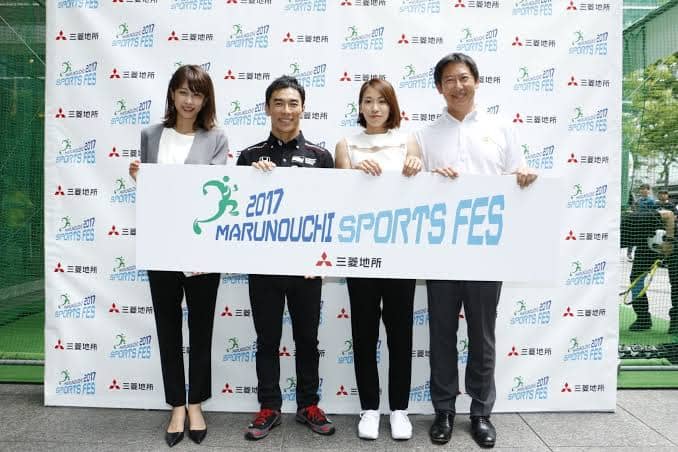 London 2017 was the theme of central Tokyo’s Marunouchi Sports Fes in August, with attendees inspired to get active by learning about athletes’ experiences and trying some Olympic sports.

Event organisers chose the theme to maximise on interest in the World Championships in Athletics, hosted in London over the same period. It was the biggest sporting event held in the UK since the Olympic and Paralympics in 2012 and, in terms of ticket sales, it was the most successful championships in history. Ticket sales for the para events alone were greater than those of the previous eight world championships combined.

In Tokyo, Union flags decorated giveaways and the Sports Fes space in Marunouchi Building where zones allowed visitors to lift hammers, get up close to hurdles, and understand athletes’ personal bests through special markings on the floor. One challenge was to stop a giant stopwatch at 9.58 seconds, the time taken for Usain Bolt to run the 100 metres in Berlin in 2009.

Public figures from government, sport and media attended the opening ceremony, and the event was supported by a host of Japanese sporting celebrities during its two-week duration.

On the street between Otemachi and Yurakucho stations, tourists, locals and office workers were encouraged to try sports such as golf, basketball and fencing as well as bouldering and slacklining from the outdoor line-up. Street rugby and wheelchair rugby were also offered to drive interest in the upcoming Rugby World Cup in 2019 and Paralympic Games in 2020.

According to event staff, the festival was designed not only to promote physical activity—fliers appealed for people to get off the train a stop early or record and compare their activity rates with Tokyo averages—but also to stimulate a better work–life balance among employees in the area.

A spokesperson shared that one of the event funders, Mitsubishi Corporation, whose head office is in the area, encouraged its staff to attend the event as part of its support. Another said that organisers hoped the festival would showcase Marunouchi and foster a sense of community and enjoyment of sport.