Written by Sterling Content
April 12, 2018
Past Event Round Ups 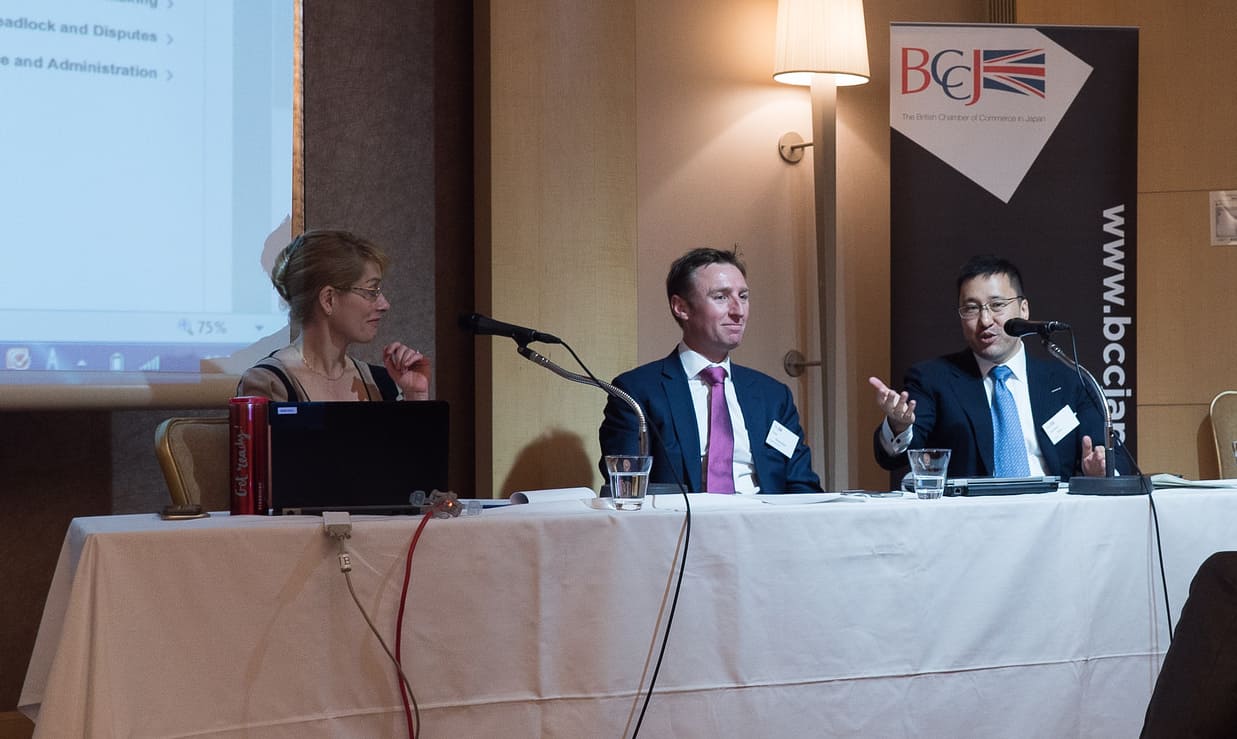 Written by Sterling Content
April 12, 2018
Past Event Round Ups

A joint venture can be a happy marriage that utilises shared investment, know-how and access to markets, but due diligence is vital to ensure it doesn’t result in difficulty or even divorce. That was the key takeaway from the BCCJ’s luncheon on 29th March, at which three experts shared the strategic, financial, operational and legal considerations required to create successful joint ventures.

Leading the session, Jacky Scanlan-Dyas, corporate partner at Hogan Lovells Tokyo, said one of the first tasks is to get alignment on the business goals of the joint venture. This includes its role, activities and decision-making process as well as the relationship between the joint venture and its parent firms. She warned that, in her experience, if the parties cannot agree on such fundamental issues at the beginning of the process, other negotiations prove difficult.

Dan Hamilton, general manager at Diageo Japan K.K., agreed, pointing out that engagement and compromise at the top level of each partner organisation are critical at the outset, followed by deep and detailed planning.

“[Deep planning] means you’ve got to commit more time and more resources from both organisations in advance—and you’re doing it without a guarantee that the joint venture is definitely going to happen—but I think that, when you get to that level of granularity, you have real confidence around the alignment of the parties’ objectives,” he said.

Akihiro “Aki” Itoh, assistant general counsel at Nissan Motor Co., Ltd., urged parties at this stage to “take time to check all the boxes,” and allow advisors to provide a much-needed reality check amidst the inevitable excitement about the new project.

Once alignment is reached, finances and funding can be considered, explained Scanlan-Dyas, pointing out that partners should consider how much money is needed not only to get the joint venture off the ground, but also to keep it going until it is financially viable. Moreover, partners should consider who will fund the joint venture and in what proportions and format.

“People think it’s easy because you have two joint venture partners putting in cash, but it almost never works that way; one partner may be providing a non-cash contribution such as technology, IP, relationships with regulators or cultural know-how,” she said. “IP needs to be quantified in money terms, so we can apportion equity contributions in the joint venture appropriately, and these discussions are difficult.”

For Diageo’s Hamilton, financing for joint ventures needs to be “bespoke for the circumstances, partners and cash flow requirements of the business.” He added: “If you’re putting up the equity and putting your balance sheet at risk, you need to make sure that your level of operational and strategic control is commensurate with that.”

The next step, according to Scanlan-Dyas, is to consider how many staff are needed to run the joint venture and from where would they sourced. If secondment is preferred, could the employees be legally transferred, would they want to be transferred, who would replace them in their former role and where would their allegiances lie? On the other hand, if the staff are recruited, who would develop a recruitment policy?

Considering these human resources challenges, Hamilton said it is important that the leadership of the joint venture creates an inclusive culture.

“If people identify with one partner rather than the goals and objectives of the joint venture, you start to see fractious types of relationship; you don’t get productivity and teamwork,” he said. “But when you get people lined up to a really clear goal, you can see beyond the partner they come from and build a common set of skills.”

Language and cultural concerns shape Japanese firms’ approach to staffing choices for the joint venture. According to Nissan’s Itoh, Japanese firms tend to choose Japanese staff that are proficient in the local language rather than appropriate local resources. Instead, he advocates utilising good advisors to help ensure the right person is in the right role, at the right time.

“When the joint venture is being launched or even considered, a team should be in place. People—and the role they are going to play—should be identified ahead of time and there needs to be the ability to change people’s roles, too,” he explained.

Partner firms should next establish the joint venture’s decision-making tree. While 50-50 control was once a popular option, Scanlan-Dyas advises against it because it can cause deadlock if both partners cannot agree. Most joint ventures now use a combination of consensus for fundamental issues and a simple majority vote for others.

To keep the joint venture running smoothly in Japan’s “process-driven society,” Itoh advised partners to build in extra lead time for decision-making. He also suggested joint ventures have ways to delegate authority so that every decision doesn’t have to be made by the Japanese partner, thus saving time.

The final topic of discussion was the winding up of joint ventures and the panellists agreed it should be discussed before the joint venture is set up.

Scanlan-Dyas explained that a joint venture might come to an end for many reasons, including completion of its purpose, drying up of money or deadlock. Whatever the reason, though, if exit mechanisms have been put in place at the outset, the divorce will be easier. She called on partners to have the difficult conversation at the joint venture’s inception—and blame the need for it on the legal team, if required.

Again, culture is a consideration. Japanese partners may wish to defer to “discussion” if deadlock is reached, but Scanlan-Dyas said this risks a prolonged break-up and big bill for partners. Itoh agreed, pointing out that this “very Japanese solution” looks great and lets partners finish setting up the joint venture but is “a nightmare for those involved in the break-up.” He described exit mechanisms as a “safety net” and a way to make divorce amicable so partners can focus on a win-win situation.

In closing, Scanlan-Dyas said joint ventures are more likely to succeed if partners take time to get to know each other, particularly in cross-border deals. Rather than only attending high-level meetings, she encourages her clients to bond with their new partners over dinner or a trip. “Build a relationship because when things get tough, you have a relationship on which you can communicate and work through the difficult times,” she said.