Written by Sterling Content
March 18, 2022
Past Event Round Ups 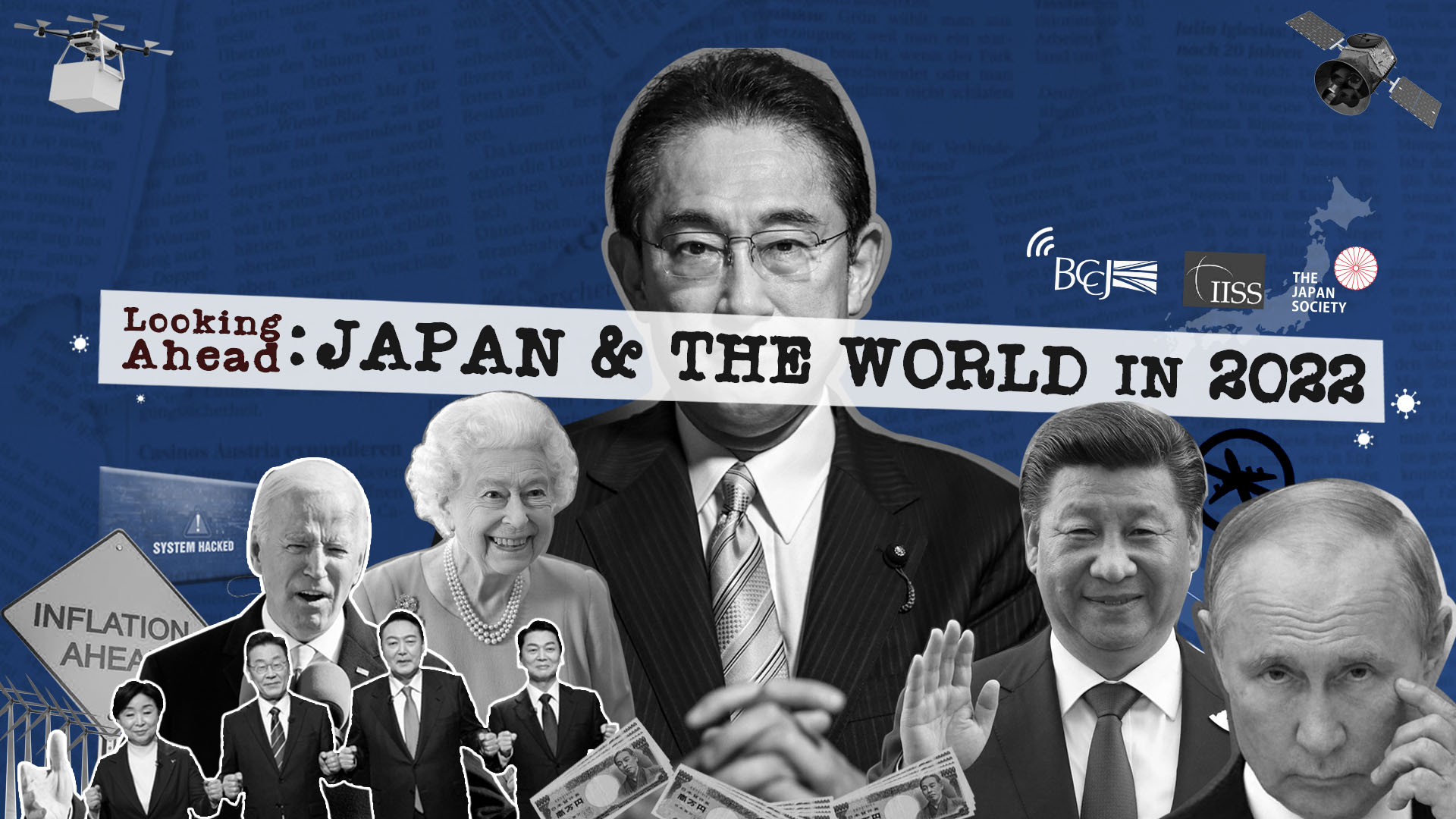 Written by Sterling Content
March 18, 2022
Past Event Round Ups

Representatives of the London-based International Institute for Strategic Studies (IISS), a world-leading authority on global security, political risk, and military conflict, gave members of the British Chamber of Commerce in Japan a global forecast for the year ahead on February 24.

Moderator Bill Emmott, chairman of The Japan Society and the IISS, began by outlining the current geopolitical environment following Russia’s invasion of Ukraine, which had occurred mere hours before the webinar.

The immediate impacts of the war include disruption to economies, sharply higher oil and other commodity prices, and stock market volatility, he said, noting that the geopolitical shock will be felt all the more against the backdrop of a turbulent past couple of years. Examples of the instability include the pandemic, supply chain bottlenecks, the risks to China of its zero-Covid policy, broader travel disruption, and the likelihood of rising interest rates—particularly in the US—to contain already rising inflationary pressures.

There is more uncertainty ahead, too. Events of note this year, he said, are the elections in South Korea, the Philippines, and France; the Upper House elections in Japan, and the US mid-term election.

Robert Ward, director of geoeconomics & strategy and Japan chair of the IISS, provided an outlook for the global economy. Describing the years since 2008 as the “most volatile economic period since the end of the second world war,” he said risks to global growth were rising even before Russia’s invasion of Ukraine.

With the world coming out of the pandemic, scenarios before the onset of the Ukraine crisis suggested global growth of around 4% in 2022 and 3% for 2023. Japan has been lagging the rest of the world in its recovery from COVID-19. Before the Ukraine invasion, 3% growth this year looked achievable for Japan, although this is largely due to a strong Q4 in 2021, he said, adding that growth is expected to slow to 1% next year.

One key risk for the world is inflation, which marks “a step change for the global economy” due to two decades of “prices remaining pretty steady,” he said. Prices for some Japanese snacks, for example, are rising for the first time since 1979. With January bringing US inflation to a 40-year high and UK inflation to a 25-year high, some policy makers may “have lost the muscle memory” to deal with such high rates, he added.

He attributed the uptick to the recovery. “Private consumption that was hemmed in has been uncorked. Growth has been so brisk that supply chains have found it hard to cope. Governments everywhere will hope that when ships appear and supply chains normalise, inflation will come down. But key to watch are inflationary expectations,” he said, pointing to the possibility of monetary tightening and interest rate rises.

Looking at the US, he said the November midterms will set the tone for the 2024 presidential election, while China will hold two important political events this year. In March, the National People’s Congress will discuss economic and development plans for the year, while autumn brings the Communist Party National Congress, where Ward predicts Xi Jinping might break the status quo of handing over to a new leader.

This year also marks 50 years of the normalisation of Japan–China relations but Ward pointed out that Russia’s invasion of Ukraine puts a strain on that relationship.

“Under threat here is the rules-based order. Putin is trying to redraw the post-1989 boundaries in Europe and create a sphere of influence in that part of Europe. These are all things that will worry Japan,” he said, adding that some members of Japan’s Liberal Democratic Party are “drawing connections between the security of Ukraine and the security of Taiwan.”

As Taiwan is becoming increasingly linked to Japan’s security, the LDP is trying to prepare the population for faster political change by accelerating discussions on defence spending and policy change, he said.

Given China’s activity around the Japan-administered Senkaku islands near Taiwan and its “broader revisionist efforts in the East China Sea,” the G7 will expect “strong action from Japan” on Ukraine, he added.

Yuka Koshino, research fellow for security and technology policy at the IISS, said Japan is “trying to respond” but, given that the country’s main strategic goal is to maintain the international rules-based order, shifting all its attention to Ukraine would “create further challenges.”

She suggested Japan’s efforts can instead involve becoming a broker to prevent further security challenges in the Asia-Pacific region, particularly in southeast Asia. Moreover, as there is speculation on the extent Russia and China are cooperating and aligning, Japan can contribute by providing intelligence on China’s abilities.

In considering the effectiveness of sanctions by countries against Russia, Ward noted the country’s “fortress economy,” “fiscally conservative budget” and “battle-hardened population.” While steps can be made to put financial strain on Russia, he said Russia’s size and lengthy experience living under sanctions would give them less teeth.

Still, Koshino said Japan lags behind other nations—including the US, the UK, and Germany—in its measures to enforce these efforts. As the country navigates the work of its new economic security position, which sits above the economic division, the question is how it will tackle the long-lasting historical tensions between military defence groups and economic groups, she said. Furthermore, she questioned how effective Japan’s approach would be.

Japan’s first national security strategy, which lays out the regional security environment and priority policy areas for the next 20 years, is due to be revised in 2022. This comes alongside new defence programme guidelines for the next 10 years and a procurement plan for the next five years. The priority in this work will be how Japan should respond to the growing number and diversification of missile threats from North Korea and China, she said.

“These are domestic responses to look for but they are important because of the context of the current geopolitical environment,” she said, adding that, with the US and Europe now focused on Ukraine, Japan will be asked, “to share the burden to maintain the free and open Indo-Pacific it has been promoting.”

Also of note this year will be whether Japan and the US will upgrade their defence guidelines—which was last done in 2015—in response to “new challenges” and “to clarify the division of labour” between the two nations in a contingency scenario.

Koshino noted Japan’s growing partnerships with other nations, including the UK, evidenced by the deepening of US–UK–Japan relations, but questioned the extent to which this could continue given the new security threat in Europe. There is a “growing need” for contingency planning and consideration of how much Japan and the US can rely on military partners outside the region, she said.