Written by Sterling Content
April 1, 2022
Past Event Round Ups 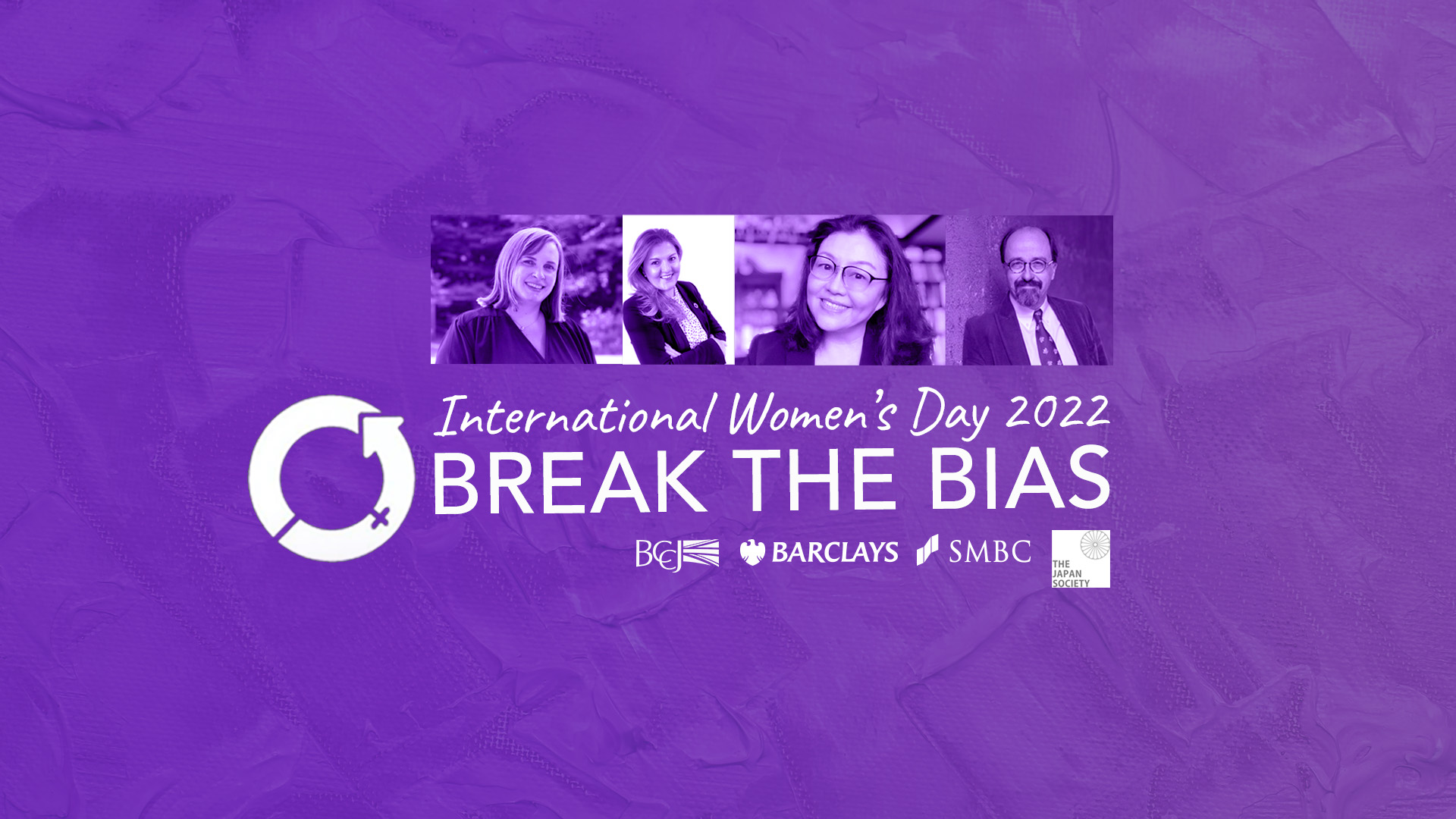 Written by Sterling Content
April 1, 2022
Past Event Round Ups

Members of the British Chamber of Commerce in Japan were encouraged to seek new ways to #BreakTheBias related to gender on March 8, during an event marking International Women’s Day 2022.

First, female participation of 15–64-year-olds in the labour force has increased from 60% some 20 years ago to 70% today, which is higher than that of the US or the European Union. Second, more than half of both sexes now have received a four-year tertiary education, up from 15% of girls and 40% of boys in the 1980s. And finally, as a result of the gender gap decades ago, only 13% of leadership positions are held by women today, making Japan the lowest of all G7 countries in this gender equality measurement.

Helen Smith, deputy head of mission, British Embassy, Tokyo, outlined the impact of the pandemic on gender equality globally. With women heavily represented in the most depressed sectors of the economy, they have seen greater job loss and economic burden. Still, the disruption caused by COVID-19 offers “opportunities to build more open and inclusive societies” so everyone can contribute equally—economically and socially, she said.

Smith said the UK government “continues to see gender equality as a top priority,” pointing  out that reducing gender gaps in the UK’s labour market participation could increase the size of the British economy by ¥8trn by 2030. Significant progress is being made, she added, noting that, in February, nearly 40% of FTSE 100 company board positions were held by women, up from 12.5% 10 years ago. But while the government is supporting various initiatives “to champion women in business,” she said more work needs to be done to address the “structural barriers” that hold women back, such as access to affordable childcare or visible female role models.

“We also need to get rid of limiting attitudes and beliefs around life choice,” she said, adding that 67% of girls aged 11–21 said they don’t have as many chances as men.

With the inclusion of a chapter on cooperation related to women’s economic empowerment in the UK–Japan Comprehensive Economic Partnership Agreement, Smith expressed hope that both countries could work together to “break biases and unlock the potential in all of our society.”

Asked about gender equality in Japan in the past decade, Makiguchi said progress has been “gradual,” pointing to the positive uptick in women joining the labour force while noting the roles they filled were largely part-time. Furthermore, “cosmetic moves during the Abe regime,” such as the promotion of women in firms of more than 300 employees, lacked adequate processes, including the transition of women into their new roles.

Working mothers also need more support, she said, noting that only 12% of fathers in private corporates took paternity leave in 2021. This is a sharp rise from 2.1% of fathers in 2011, but “not notable progress.”

“We’re so far behind major economies,” she said, citing one problem as the “lack of senior leadership in economic and political forums.”

Cvetkovikj also cited the economic and political empowerment of women at the highest levels as a barrier to achieving gender equality. Female participation in politics is 9.9%, well below the global average of 25%, which Japan is struggling to reach even as many countries are aiming for 50% by 2050. It is a problem, she said, because politics is where “the future” is being decided. In business, too, only 8.2% of listed companies in Japan are led by a woman.

Tackling this low senior-level participation, Cvetkovikj said, requires improvements to infrastructure, such as the number of childcare facilities, and amendments to laws, including to allow foreign workers to come to Japan to help in the home and to allow joint ownership, thereby giving women more financial independence.

Moreover, greater efforts are needed to support women who wish to keep working after they have children, she said, pointing to the 80% of women who currently quit their job once they get married or have children. Ideas include longer maternity leave and steps so they can more easily transition back to work once they’re ready. By implementing such options, benefits would be felt by both women and men, she said, adding that “gender issues are human issues.”

At corporates, Makiguchi said that some action plans have been better than those suggested by the government but called for a “top-down approach” and “greater momentum” to build on steps taken to promote gender equality in leadership, training and career guidance.

Cvetkovikj said she has seen corporations adopting a more flexible approach to work in recent years, spurred on by pressure from ESG-related indexes such as the Nadeshiko Brand, a joint effort by the Ministry of Economy, Trade and Industry and Tokyo Stock Exchange to select and announce companies promoting the active participation of women. COVID-19, too, has accelerated change in the working environment that could enhance gender equality.

“Japanese corporate culture has been dismantled,” she said, noting that, pre-pandemic, women were usually unable to participate in work drinking parties due to responsibilities at home. With gatherings curbed because of COVID-19, employers are looking for other ways “to recognise talent,” promoting greater equality in the promotion process.

SMEs, on the other hand, tend to have in-built flexible ways of working, which has been proving attractive to women. “For startups and smaller firms,” said Makiguchi, hiring leaders is all about “who can get the job done,” which can “energise and revolutionise older sectors.”

Still, female entrepreneurs can face bias when they seek financing, according to Cvetkovikj, who said banks need to be more gender-balanced when giving loans.

When asked how government policy could remove gender bias in Japan, the two panellists agreed that a holistic view is essential.

Makiguchi called on large corporations to “fine tune” their action plans for gender equality in senior leadership, by setting KPIs and making a road map for their goals.

Given that 26% of the population is aged 65 or over, Cvetkovikj said Japan needed to put building blocks in place for “a more harmonious society,” where women choose to be part of the workforce rather than feel pressured to be part of it. Furthermore, empowering women to feel fulfilled in their economic, political and social role—whether by infrastructure, policy or social change—will positively affect the whole society, she said.

In closing, Makiguchi said that based on steps toward gender equality being taken now, she sees a better Japan on the horizon.