Written by Sterling Content
March 26, 2021
Past Event Round Ups 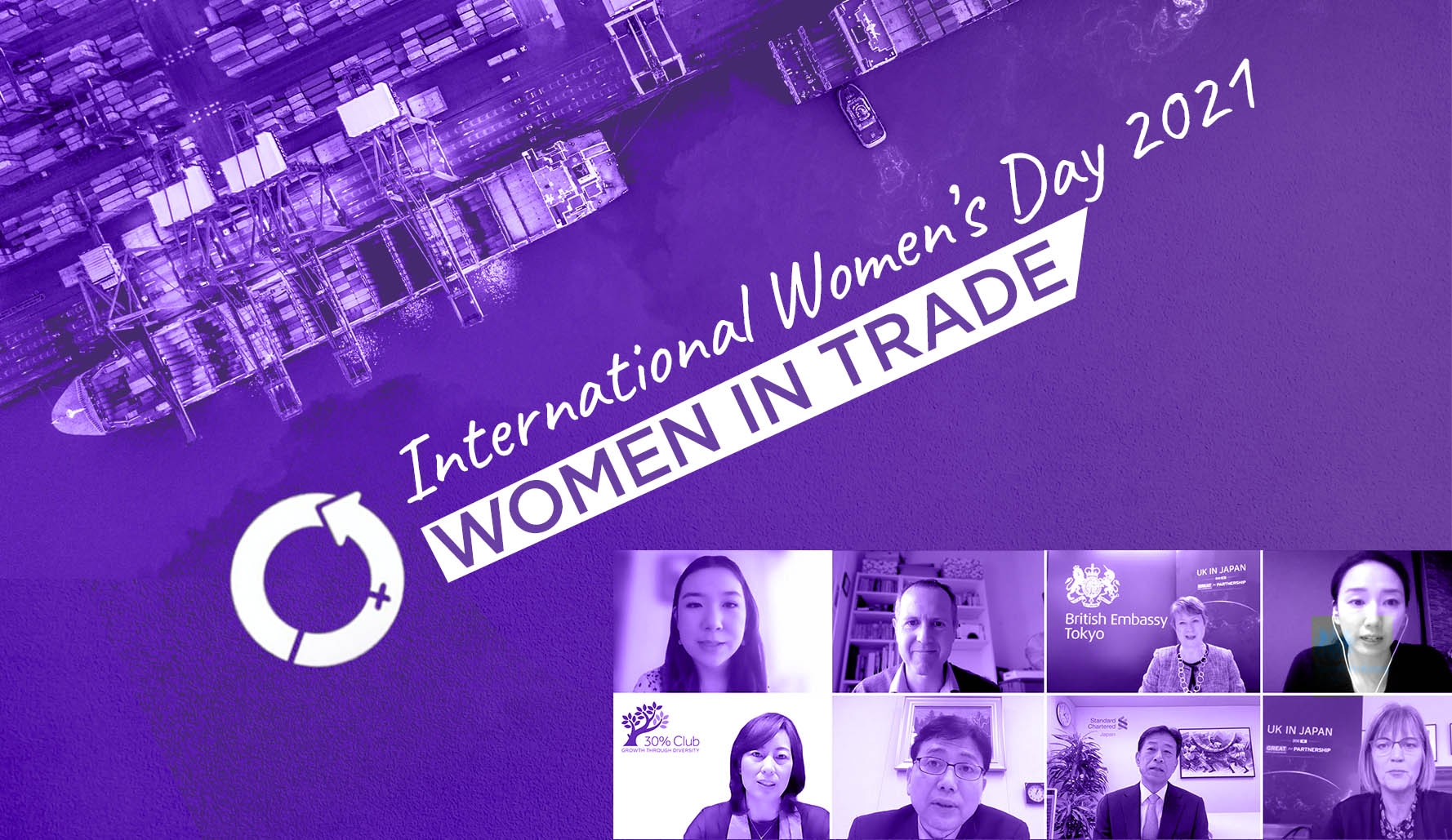 Written by Sterling Content
March 26, 2021
Past Event Round Ups

British Chamber of Commerce in Japan (BCCJ) members marked International Women’s Day on March 8 with an online event co-hosted by the British Embassy, Tokyo. A diverse panel comprising representatives from Japan and the UK, working in government and business, discussed the topic of women in trade.

Graham Zebedee, director in the UK’s Department for International Trade, kicked off the webinar, pointing out that the pandemic has disproportionally affected women.

“As we work to bring trade back to levels before the crisis, it’s vital that trade benefits as many people as possible,” he said. This is feasible because “international progress on women’s economic empowerment has been building,” he added, citing the Beijing Platform for Action in 1995 and the Joint Declaration on Trade and Women’s Empowerment at the World Trade Organization Ministerial Conference in Argentina in 2017.

Still, problems remain at home and abroad. In the UK, only one in three entrepreneurs is female. And of those who do launch a business, many face barriers to starting them and scaling them up. Globally, women-led businesses collected less than 3% of global venture capital in 2017, resulting in fewer women participating in international trade.

“Almost 40% of companies led by men in Europe have no senior female executives,” he said. “Supporting women will lead to a virtuous cycle as women-led companies employ more female leaders.”

One answer, he added, is to seek action in various sectors such as education, skills and social security. The UK’s policy of reflecting women’s economic empowerment in all its new free trade agreements shows the vital role than trade policy can play, too.

In the UK–Japan Comprehensive Economic Partnership Agreement (CEPA), Japan and the UK agreed Chapter 21: a commitment “to working together to increase the ability of women—both as business owners and as workers—to access the benefits of the agreement,” he said. “Together, we can promote initiatives that increase women’s access to technology and markets, develop women’s business networks and promote workplace flexibility.”

Noriyuki Shikata, director general of Economic Affairs Bureau at Japan’s Ministry of Foreign Affairs (MOFA), echoed Zebedee’s sentiments on Chapter 21, adding that it “sets out the importance of the long-term investment in future female business leaders and professionals.”

Progress is being made in Japan, Shikata said, citing this year’s incoming management track at MOFA, which was 56% female. In UK–Japan collaboration, too, there is a solid foundation, including the vast number of opportunities for bilateral exchange. Still, more opportunities are needed to boost women’s professional development in both countries, he said.

“It’s critical that we jointly explore new potential in areas of bilateral cooperation, in close partnership with the business community, educational institutions and other stakeholders,” he said. “We need to make up for the loss of opportunities [due to COVID-19] by creating new ones through the use of online technology.”

Such opportunities might include trade-related short-term online programmes on topics such as business management, communications, finance, digital technology, STEM and international development. Young female students and workers, he added, would also benefit from greater access to internships and networks of women entrepreneurs and professionals.

Over the past 30 years, Sumitomo Corporation has been hiring more women in key roles and has developed maternity leave policies that exceed what is required by law, according to Nami Katagiri, assistant to the general manager. Almost all who take leave to have children return to work.

Katagiri reflected on her 12 years in international trading and business operations within Sumitomo’s minerals department in Africa and South America, noting that the opportunity to travel has motivated her in her career. She suggested that more needs to be done to help female staff “challenge themselves, aspire a management position and build their capabilities for the world.”

Yasunori Takeuchi, CEO of Standard Chartered Japan, agreed that more needs to be done to empower women in the workplace. The bank’s initiatives include a female mentorship programme and inclusive leadership training for all people managers. In addition, women and men sit on every hiring panel.

Takeuchi said the global supply chain has driven economic growth globally, yet widened economic disparity. In response, Standard Chartered is working twofold: to boost supplier diversity by onboarding companies and social enterprises run by minority groups and to provide education to vulnerable girls aged 12–18 in emerging markets. The latter initiative’s goal is to support one million girls into employment or entrepreneurship by 2023.

Diversity and inclusion is “at the centre” of the bank’s strategy to drive commerce and prosperity, which comprises both external- and internal-facing efforts. Standard Chartered is “striving to be the best place for women to work,” Takeuchi said. Some 46% of its 85,000 staff in 60 markets is female and more than 30% of its Japan management team are women.

This was welcome news to Mika Nabeshima, representative of the Japan chapter of the 30% Club, a global campaign to increase gender diversity to at least 30% at board and senior management levels globally.

“Our mission is to achieve sustainable growth and development in Japanese companies by promoting diversity and inclusion, to contribute to the creation of a vibrant and prosperous Japanese society in which men and women are equal,” said Nabeshima, who is also general manager of global HR at Tokio Marine Holdings.

By 2030, the Japan chapter wants 30% of executive positions in Japan’s TOPIX 100 companies to be held by women. With this goal, it has set up the Topix Presidents’ Association, a community for the top management of listed Japanese companies. Members are invited to share best practice, provide information for surveys and discuss how women’s empowerment initiatives can be tailored for Japanese companies.

“We’ve discussed how the needs of women differ depending on the stage of their career or their personal situation, such as having children,” said Nabeshima, adding that the chapter is “taking positive action to help women progress further in their career.”

The panellists also highlighted the difficulties women face at work due to unconscious bias. Some might assume a female team member raising young children, for example, is unable to take on challenging work, said Sumitomo’s Katagiri, adding that continuous systematic training is needed to overcome such assumptions. Nabeshima noted that firms also need to “provide opportunities for staff to train themselves” in understanding and addressing unconscious bias.

British Ambassador to Japan Julia Longbottom CMG expressed her commitment to mainstream gender issues in the activities of the UK embassy and consulate in Japan. Chapter 21 in CEPA, she added, is “a real opportunity” for the UK and Japan to support more women into trade.

In the area of global gender equality, Longbottom said the British government’s wrapping of development issues into diplomacy in its new department for foreign policy and development brings “an even stronger focus on the importance of women to economic development.”

Reflecting on her position as the first female British ambassador to Japan, she said role models are vital to young women everywhere: “It matters that women can see other people like themselves and understand that they can play these roles in the future.”