Written by Sterling Content
July 8, 2022
Past Event Round Ups 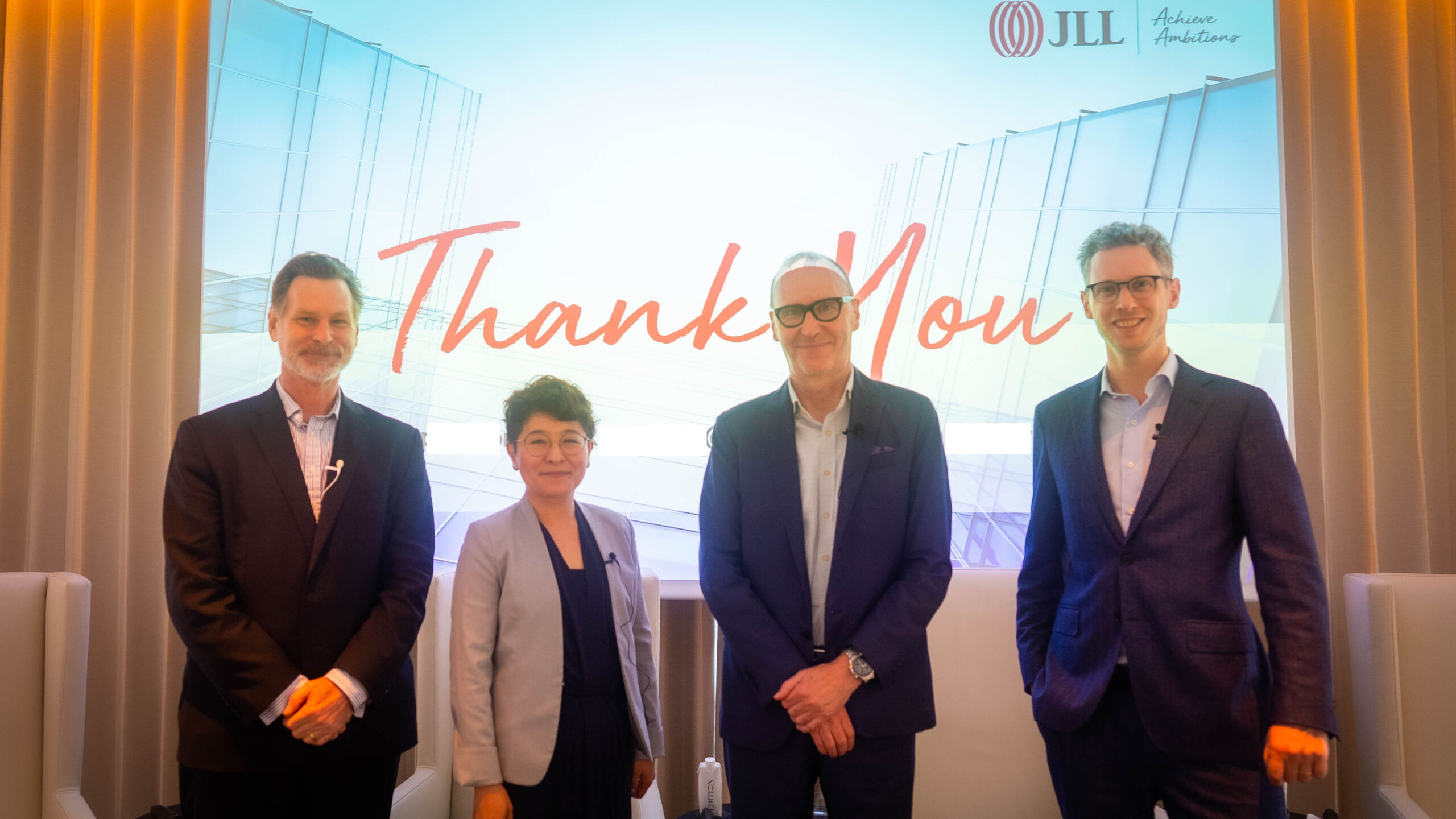 Written by Sterling Content
July 8, 2022
Past Event Round Ups

The global coronavirus pandemic may have changed the office forever, with remote and hybrid work becoming the norm. As employees now favour the improved work-life balance the new formats have brought but miss social interactions with their colleagues, the global real estate market may never be the same, according to real estate experts.

The impact of these trends was the focus of the British Chamber of Commerce in Japan’s June 22 hybrid event, The Future of Work: Redefining the Workplace and Impact on the Real Estate Market. The event featured speakers from global real estate services company JLL, comprising John Cook, executive director; Joris Berkhout, director and team lead; and Rie Osugi, director.

Cook kicked off the event by outlining the activities of JLL, which interacts with owner-investor and occupier clients at all stages of the real estate cycle. In addition to its presence in Tokyo, Osaka and Fukuoka, JLL operates in about 80 countries with 90,000 employees.

This introduction was followed by Osugi’s analysis of JLL’s research on employee attitudes to work over the past two years.

Hybrid is now the most popular method of working, according to the June 2022 JLL Workforce Preferences Barometer, which surveyed more than 4,000 office workers in 10 countries, she said.

The poll found that 60% of office workers want to work in a hybrid style that combines work from home or other remote spaces with in-office time, with 55% already doing so. This reflects the survey’s finding that quality of life is now employees’ top concern, followed by “working in a company that ensures my health and wellbeing.”

The previous top response of “securing a comfortable salary” dropped to third place.

“Three out of four employees would reconsider their involvement with their company because they want to have greater flexibility and more quality time with their family or for personal pursuits,” the survey found.

However, the poll also found a gap between employers’ current practices and employee priorities, particularly concerning flexible working and commuting to the office.

Even within the same industry sector, however, there are divergences in workplace strategies.

And although hybrid work is increasingly favoured, half of the employees surveyed miss social interactions when working remotely and 44% miss the “common understanding and bonding” that comes with sharing the same office.

Companies have responded to the new environment with changes in office design, based on flexibility, wellness, technology and infrastructure, according to JLL. These changes have led to a smaller office footprint.

“We’ve seen a general trend over the past two years of many multinationals responding to low utilisation levels by giving back 20–30% of office space,” said Cook.

Occupiers are also looking to their landlords and developers to offer amenities that they do not need to replicate within their own tenancies, for example “childcare facilities and gyms, as well as pay-as-you-go meeting facilities.”

To address wellness, JLL has also seen a number of companies installing indoor air quality controls and seeking WELL certification, a performance-based system for measuring, certifying and monitoring features of the built environment.

“There’s also been a focus on how spaces are curated. When people come back to the office they want to know it’s clean, hygienic and well maintained,” he added.

The new hybrid work environment has had an impact on the office market, including in Tokyo, with the market now becoming “tenant friendly.”

However, JLL does not see a “collapse” in rents as some expected, due to the impact of landlord incentives and increased demand for quality office space.

Berkhout also pointed to growing divergences between Tokyo’s office submarkets. Although the vacancy rate was uniformly low prior to the outbreak of COVID-19, there are now substantial differences between areas in strong demand, such as Marunouchi, Otemachi and Shibuya, and those in lower demand such as parts of Shiodome and Shinagawa.

The divergence is expected to further widen with the impact of new developments, including Mitsui Fudosan’s Midtown Yaesu, due for completion this year; Mori Building’s Azabudai redevelopment and Sumitomo Fudosan’s Mita redevelopment, both targeting completion in 2023.

“By far, most future redevelopments will occur in the corridor from Tokyo Station down to Toranomon and then the Tamachi/Shinagawa area,” Berkhout said.

He noted increasing flexibility, with some cases of tenants being able to “take over existing layouts of other tenants,” which rarely happened before. Other changes include more employees working from “third-location spaces” and even companies moving their entire headquarters into co-working facilities.

An issue for the Japanese real estate market is older buildings, which may struggle to attract tenants amid a scramble for quality office space, he added.

Moving to the panel discussion, the JLL experts were asked questions ranging from the “coolest” office design in Japan (a multinational pharmaceutical company’s headquarters in Kudanshita and Salesforce’s Marunouchi office were nominated) to the most popular locations for co-working hubs (typically near major gateways such as Shibuya and Shinjuku). They were also prompted to consider which Japanese companies are leading the way on the  hybrid model (tech firms such as Fujitsu and Hitachi were cited, together with education provider Benesse).

When asked if changes to how we work are here to stay, Cook said there has been a “shift towards the curation of spaces,” with more offices opting for a fusion of corporate and hospitality functions.

While Tokyo is leading the charge towards hybrid in Japan, JLL sees the same trend spreading to regional markets such as Osaka and Fukuoka.

“In Japan there’s a big difference between how much companies are implementing working from home based on the technologies, tools and policies they have in place … business performance has remained strong, so working from home hasn’t affected companies’ ability to operate and be successful,” said Berkhout.

Indeed, remote and hybrid work can deliver the same level of productivity for employees, the panel concluded.