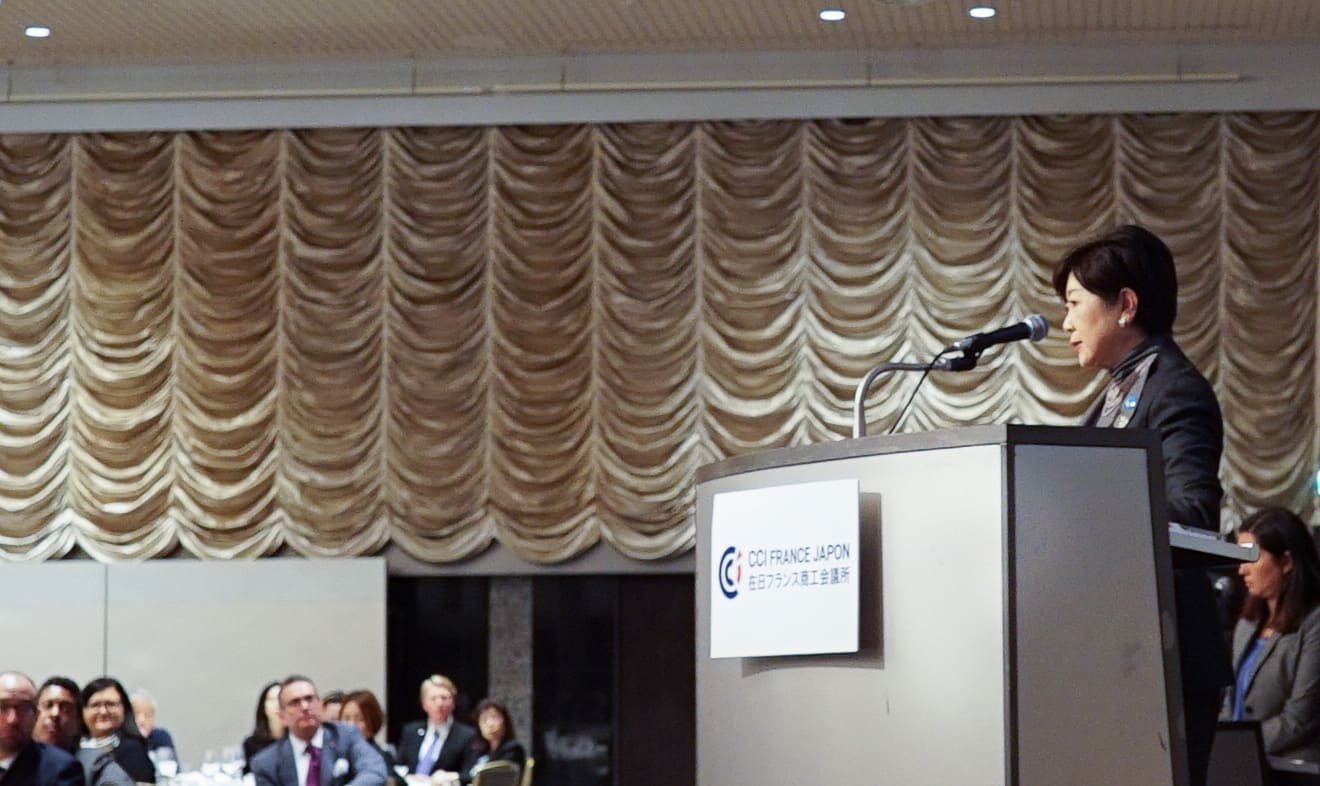 A Tokyo that is safe, diverse and smart is the goal of the city’s metropolitan government according to Governor of Tokyo Yuriko Koike, who addressed members from 15 European chambers of commerce on 22nd November.

In a sell-out luncheon attended by some 300 people, including representatives from the BCCJ, Ms Koike outlined how she is working to achieve that goal and how the Tokyo 2020 Olympic and Paralympic Games might help drive the change she is seeking.

Opening her address, she said she was “honoured to have an opportunity to share Tokyo’s initiative for a sustainable future with people who play an important role in linking the business worlds of their respective countries and Japan.”

For any reform, she said, martial arts can be “a good place from which to draw inspiration” in order to “change society for the better.” One example is shingitai, the term for the qualities of a martial arts practitioner. Shin (mind) teaches us the need for compassion and understanding of others, gi (skill) reflects the technological innovation required, and tai (body) represents the institutions and systems that help make reform possible.

One of Ms Koike’s priorities is to remove the utility poles across Tokyo, which number some 35 million or about the same number of cherry trees throughout Japan. By doing so, she hopes “to not only create a more appealing cityscape but also to strengthen Tokyo’s disaster preparedness.”

When questioned about how the Tokyo Metropolitan Government is addressing passive smoking, she appealed for “meaningful” regulations, pointing out that the national government’s proposal to ban smoking only in restaurants greater than 150 square meters would have little impact as most restaurants are smaller than that. Tokyo, however, is considering advice from the World Health Organization to “prepare regulations for the general population,” she said.

Admitting that there is “significant room for Japan to improve” following its ranking of 114 in the World Economic Forum’s 2017 Global Gender Gap Index, Ms Koike said she wanted to make Tokyo “a diverse city were all people can fulfil their potential.”

She recognized that the city continues to lags behind its European counterparts in terms of women in the workforce, with only 40% of metropolitan government services roles filled by women. Some 20% of management positions are filled by women, however, which is a higher proportion than that of many organisations in Japan.

Recent initiatives, such as the Acceleration Program in Tokyo for Women, have been introduced to encourage women into employment or self-employment by boosting their entrepreneurial skills.

“Greater participation by women in the economy is essential for sustainable growth, even more so as our population ages and our workforce shrinks,” Ms Koike said. “I think it is a social crime that women are given the choice of rearing children or working. A normal society would be one that allows people to do both. Tokyo aims to be a place where it is easier for women to work and raise children.”

One method being considered is flexible working. Ms Koike said teleworking initiatives carried out during the London 2012 Olympic and Paralympic Games to ease traffic congestion were a great success and are an example of what is possible in Japan.

“I believe the Tokyo Metropolitan Government should apply [teleworking], which is why I am promoting the idea of the office going paperless. We hope to be a model for how to work, which can be emulated by businesses around Japan,” she said.

For Tokyo, London 2012 demonstrated not only how to drive social change but also how to boost the city’s image. She reflected that the Games “helped to enhance the appeal and value of London as a city,” which was also what she sought for Tokyo. “I hope to pass the baton to Paris [for the 2024 Games] on behalf of a city that I hope represents compassion and sustainability,” she said.

Tokyo 2020 is set to play a key part in driving the conversation on sustainability. Describing the Games as “an opportunity to show the world a model of a sustainable society,” Ms Koike said the Tokyo Metropolitan Government plans to make Tokyo carbon emission free for four days, when the opening and closing ceremonies of the Olympic and Paralympic Games take place.

Work is also underway to collect unwanted cell phones and small electronic items to harvest components that will be turned into 5,000 medals, to be presented to the winning Olympians and Paralympians. More than 70,000 devices have been donated to the metropolitan government building alone.

In the lead up to Tokyo 2020, Ms Koike said the metropolitan government is coordinating with local government bodies to utilize hydrogen energy from solar plants and wind generators, while moving forward with the installation of hydrogen stations and introduction of fuel-cell buses. In the Tokyo metropolitan area, it aims to raise the ratio of energy consumption generated from renewable energy sources from 11% in fiscal 2015 to 30% by fiscal 2030.

“Our goal is for Tokyo to develop sustainably in order to become a truly matured society that exists in harmony with the environment,” Ms Koike said, adding that the goal is an emission-free Tokyo.

Also central to achieving sustainable growth is innovation in the finance sector, according to Ms Koike. The Tokyo Financial Big Bang, which was launched in November, will make the city more business friendly, she said. Developed over the course of a year with experts including former Lord Mayor of London Sir Roger Gifford, it will continue to provide support for foreign companies to expand in Tokyo, she said.

Additional efforts are being put into attracting firms in growth sectors such as the Internet of Things and Artificial Intelligence as well as asset management and fintech. Alongside this work, offices have been established in Paris, San Francisco and London to promote Tokyo as a place to do business.=

Tokyo is also keen to work more with London in the field of finance, Ms Koike explained. Following her speech, on 4th December, Tokyo and the City of London assigned a memorandum of understanding to deepen cooperation in the finance sector, including in green finance and ESG investment.

“Tokyo seeks to establish itself as a world-leading international finance centre,” Ms Koike said. “We are very pleased to be partnering with the City of London and have high hopes for comparative efforts going forward.”