General Election 2019: What does ‘Get Brexit done,’ mean? 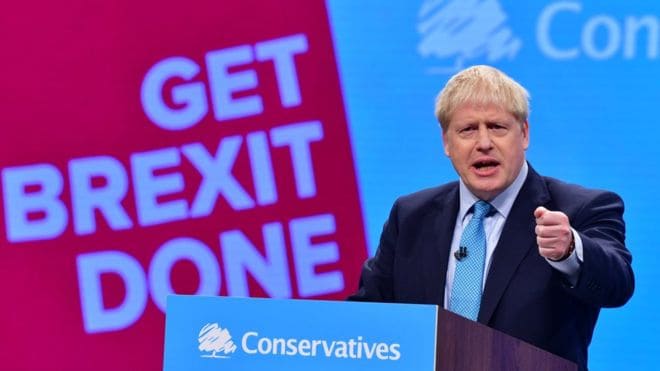 The Conservative slogan “Get Brexit done” suggests a quick and easy path to leaving the European Union (EU), allowing the UK to focus on other things apart from Brexit. But it’s not that simple.

We know the Brexit deadline has been delayed again – this time until 31 January 2020.

If the Conservatives win a clear majority in this election, Brexit day could be earlier than that, otherwise it could be delayed again.

Either way, though, it won’t be the end of the matter.

Boris Johnson wants it to happen as soon as possible.

“You are really taking back control of all the things – money, border, rules – you are doing all that.”

But while the day of Brexit would certainly be a big symbolic moment (loved and hated in equal measure), it would also leave an enormous amount unresolved.

That’s because Brexit is not really a single event – it’s a complex process that will go on for years.

What would happen on Brexit day?

The UK would no longer be a member state of the European Union.

That would be a significant change. But – and this assumes the UK left with a withdrawal agreement – only a few issues would actually have been sorted out.

Almost everything else would still be up for grabs. Brexit would not be done. The legally binding deal we’re talking about at the moment covers only the divorce, not the future relationship.

That is dealt with in an accompanying political declaration, which is non-binding and sets only a direction of travel. A future government could still change course.

What about the transition?

Initially, the UK would enter a transition period during which it would continue to follow all EU rules and regulations and continue to pay the same amount of money into the EU budget.

The transition would be due to end in December 2020, but under the terms of the withdrawal agreement it could be extended by one or two years.

The government, though, has now said it will not ask for any extension.

The advantage of transition is it would be a soft landing. There would be no sudden changes to the way the economy works, which would give some certainty to businesses. And there would be time to start negotiating the shape of the future relationship between the UK and the EU.

But for as long as it lasts, the UK would have to follow all the rules policed by the European Commission, and the jurisdiction of the European Court of Justice, without having any say in making those rules.

What about the future?

There is a lot we need to talk about.

What kind of free-trade arrangements would be put in place? What kind of security and police cooperation would be negotiated with the EU? How would data be exchanged in the future?

It usually takes years to negotiate a free-trade deal but the UK and the EU would initially have a matter of months.

The withdrawal agreement says the two sides would have to decide by 1 July 2020 whether to extend the post-Brexit transition period. So if the UK was to leave on 31 January, at the end of the current extension, there would be exactly five months to negotiate a trade deal.

That’s not enough, not even close.

It’s true the two sides would start from the same place (with all the same rules and regulations). But it’s also true this would be the first trade deal in history when two parties were trying to move further away from each other rather than closer together.

Trade negotiations are not for the faint-hearted – naturally enough, everyone is looking after their own interests. Some sectors of the economy would do well but others with less political clout might suffer. The fishing industry (which represents only about 0.1% of the UK economy) is fearful of this because it knows trade deals involve trade-offs.

One other thing: as well as negotiating with the EU, the UK would also need to sign up to a series of trade agreements round the world to replace those it has as part of the EU.

All of that could take up most of the next decade. It won’t be done when the UK leaves the EU – it will only just have begun.

If the UK were to leave with no withdrawal agreement, of course, there would be no transition period. Supporters of no-deal call it a clean break – we’ve looked at what that would entail here.

The UK would certainly be free of EU rules and regulations straight away.

But it would be a sudden jolt that government forecasts and the vast majority of independent economists say would do serious damage to the economy.

All those negotiations about the future would still have to take place but they would do so in a much less harmonious political atmosphere.

And if the government sticks with its pledge to rule out any extension to the transition period, its opponents fear a new kind of no-deal could happen at the end of next year – ending the transition without any free trade deal in place.

What about healing the divisions?

Talking of harmony, part of the government’s “Get Brexit done,” argument is it would help heal the divisions in society that have emerged since the Brexit referendum.

But many people are opposed to the government’s proposed Brexit deal. Those who support remaining in the EU would continue to campaign for another referendum – a final say before Brexit happens. And if they were to fail, they could transform their campaign into a movement to try to rejoin.

On the other side of the argument, those who favour a clean break could continue to argue that the compromises the government has had to make to come to an agreement with the EU amount to a betrayal of their Brexit vision.

Leave and Remain has become a more important dividing line in many ways than UK party politics and it doesn’t feel like that will suddenly come to an end.

Whatever happens in the next few months, the fallout from the Brexit referendum will remain with us for years to come.