Written by Sterling Content
April 4, 2019
Past Event Round Ups 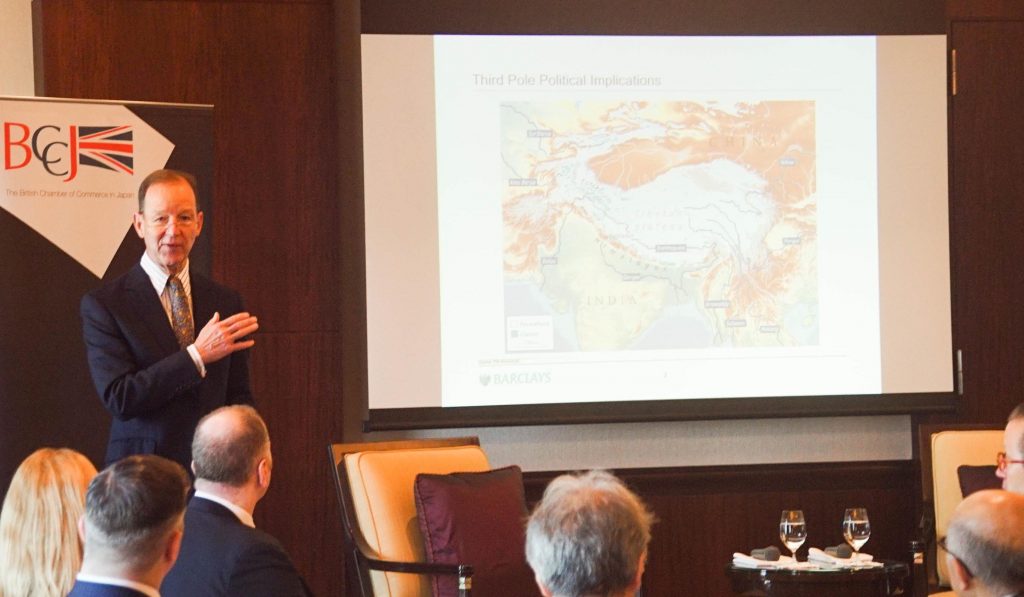 Written by Sterling Content
April 4, 2019
Past Event Round Ups

Green finance is undergoing a revolution, as British banks such as Barclays lead the nation’s charge for global leadership with products ranging from green bonds to mortgages and trade loans. And, with the recent launch of Green Finance Network Japan, Tokyo is also starting to embrace the global trend.

Bankers and environmentalists may seem strange bedfellows, but not according to Theodore Roosevelt IV, managing director in Investment Banking at Barclays’ New York office. He spoke on green finance at an event organised by the BCCJ in association with the American Chamber of Commerce in Japan’s Alternative Investment Committee.

A great-grandson of former US President Theodore Roosevelt, the prominent financier and conservationist pointed out the growing impact of climate change and the need for the finance industry to better understand the risks associated with it and to assist in the shift to a low-carbon economy.

“Last year, 2018 was the fourth hottest in 140 years of record keeping, with the five warmest years in recorded history occurring in the last five. And the Earth’s temperature in 2018 was more than one degree above the average temperature of the late 19th century,” Roosevelt said.

“If you take the city of Houston, Texas, in both of the last two years it had a 1-in-500-year event … I think that suggests the [traditional] model no longer works,” he said, adding that the insurance industry is moving only very slowly away from that model.

In contrast, climate models developed in the 1970s have worked “amazingly accurately,” he added.

The banker said climate science would drive “dramatic changes” in underwriting and lending, since insurers would have to adjust standards to reflect the increased risk of extreme weather events.

“Once investors see the value of climate science in predicting future risk, prices will change and society will be compelled to take notice,” he said.

The West Antarctic Ice Sheet, Greenland Ice Sheet, Palearctic permafrost and Tibetan Plateau or Third Pole are areas where climate change will occur rapidly, with a potentially devasting impact on continental Asia. The geopolitical implications, he noted, include increased migration, drought and war.

Green finance, Roosevelt said, could accelerate moves to address the challenges posed by climate change, such as helping the developing world gain access to clean energy.

Investing in new technologies by taking risks is vital, but it will not be without difficulty, he added.

“When investing in green technologies—technologies that aren’t proven—you can’t just say I want a 15% return because I’m taking this kind of risk; that’s not the way it works. It’s going to require a lot of collaboration, and it’s also going to take government policies.”

Roosevelt called for a “global price on carbon” that would be roughly the same in the US, Europe and China, “so there’s a clear financial incentive to move away from carbon-intensive industries.”

He said electricity demand would continue to rise, partly due to the growth of electric vehicles powered by battery technology, nominating Japan’s Toshiba for “doing some really interesting work” in batteries.

“But if you substitute electricity for petroleum, you have to ask yourself, where will it come from?” he asked rhetorically.

Fourth-generation nuclear technology could be one solution, he said, pointing out that policymakers had “learned the wrong lesson” from Japan’s 2011 nuclear disaster at Fukushima, whose reactor was built with “obsolete technology.”

Asked how Japan’s financial sector could help drive green finance initiatives, Roosevelt suggested three key arguments to make with lawmakers, clients and internally. First, as stewards, it is necessary to make changes for the “unborn generations.” Second, as effective risk managers, it is impossible to ignore climate risks. And, third, as employees, green is the future.

The younger generation “don’t want to join” firms unwilling to embrace sustainability, he explained, adding that this trend has given Barclays a “comparative hiring advantage.”

“Our natural resources business is hugely profitable, we do a lot of M&A business for energy companies and we want to keep that,” he said. “But we want to look at new technologies. We will still need petroleum for the foreseeable future, but we’re seeing changes. When I go and talk to Statoil or BP, they are making a lot of changes as they see the same developments that we see—they know they have to change.