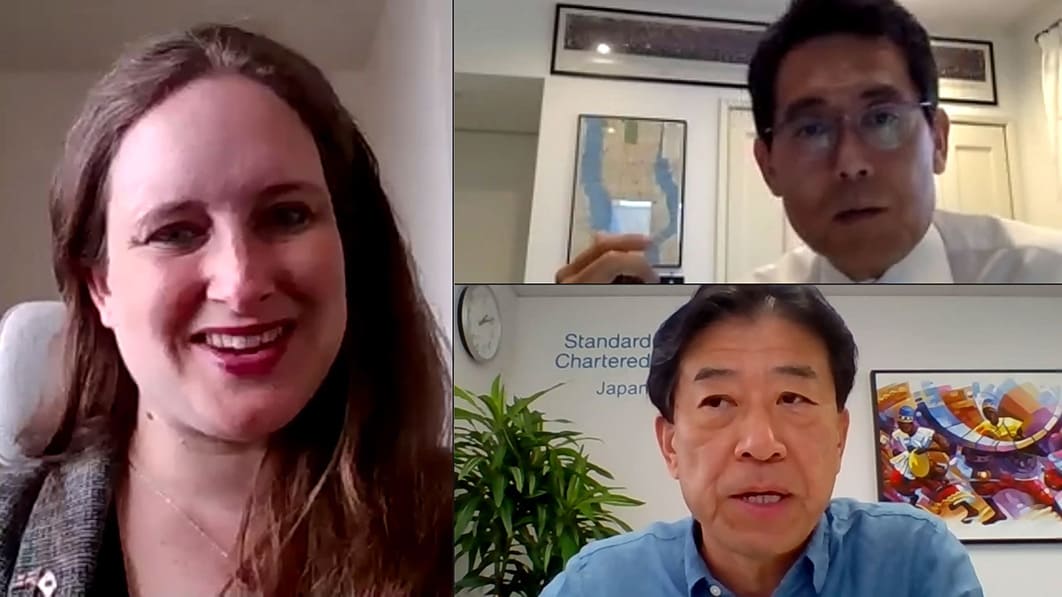 Japan and the world are facing the biggest downturn since the Depression as the COVID-19 pandemic inflicts its deadly toll. Yet, amid the destruction of human lives and economic output, there are also opportunities to rethink standard practices to ensure a better post-pandemic future.

That was the message from the British Chamber of Commerce in Japan’s April 20 webinar, entitled “COVID-19: Threats and Opportunities in Finance.”

With panellists comprising Kentaro Kiso, president of Barclays Securities Japan, and Yasunori Takeuchi, CEO of Standard Chartered Bank Japan, the session offered financial market insights into the impact of the crisis, with moderation from Naomi Davies, economic counsellor at the British Embassy, Tokyo.

The International Monetary Fund (IMF) has projected the world’s worst recession in decades, with global GDP expected to shrink by 3% and Japan’s GDP expected to dip by 5.2%. Other forecasters have warned of an even deeper downturn, with Capital Economics predicting Japan’s GDP contraction this year to reach 5.5%, far bigger than the 0.5% fall seen during the global financial crisis.

The panellists echoed the dismal forecasts, noting wide-ranging impacts on the world’s third-largest economy, including to the travel industry, manufacturing and supply chains.

“We are fighting against a pandemic and we have a priority to save lives … so to some extent we need to sacrifice the economy and business,” Takeuchi said. “Due to the stay at home order, individual consumption has stopped … we don’t know when we can go back to normal, so [the impact on the economy is] very significant and very broad.”

Kiso questioned when cash supplied by policymakers might cascade into the economy, pointing to the widening gap between actions on Wall Street and what is seen on “main street.”

“Central banks and governments are doing everything they can to throw out cash, but to my mind that cash has not reached main street yet,” he said.

As a result, Kiso warned of the potential for loan defaults from Barclays’ portfolio, which includes private loans, mortgages, business lending and other securities.

Bankers to the rescue

In financial markets, Takeuchi noted three risks: a liquidity risk, which has been addressed by central banks; a credit risk due to firms facing bankruptcy, where government fiscal spending has an important role; and country risk for nations highly dependent on commodities and trade, which could face capital outflows and need support from multilateral agencies, such as the IMF.

Fortunately, though, the finance sector is in better shape than before to take on the challenge.

“Thanks to various efforts after the global financial crisis, the financial industry is much sounder and more robust,” Takeuchi said, adding this would allow it to play a role in supporting businesses and the economy.

Kiso agreed that the financial sector is better prepared now compared to the time of the global financial crisis, noting that Barclays has already approved a large number of loans to assist firms in riding out the storm.

Unlike the global financial crisis, which emanated from the banking sector and saw bankers being seen as “bad people,” this crisis is seeing bankers coming to the rescue.

“We’ve spent the last 12 years doing stress tests and we now have ample liquidity and capital,” he said. “We are now part of the social infrastructure helping the economy, and that wasn’t the case last time.”

Asked about Japan’s fiscal and monetary stimulus efforts to combat the pandemic’s effects, Kiso said the central banks are “taking a whatever-it-takes approach.”

The Bank of Japan, meanwhile, isn’t doing anything new. He noted that it “has been doing quite a lot already in the past few years” but could have some more positive approaches in store.

Kiso described the Abe administration’s record $1.1trn fiscal stimulus, amounting to almost 20% of GDP, as a “staggering number,” but admitted the process of getting these funds to people “is taking a lot of bureaucratic processes and is very cumbersome, unlike in the UK and US.”

Takeuchi stressed the importance of the financial sector in supporting recovery efforts, pointing to Standard Chartered’s $1bn special lending facility to support clients, in addition to a $50m fund to boost non-profit organisations.

The panellists were asked about the possibility of any further China–U.S. conflict and how it could impact the economic recovery.

Noting the rise of “anti-globalisation,” Kiso called for “strong and compassionate” political leaders who could think of not only their own nation but also the whole world.

Takeuchi suggested the pandemic would lead to increased geopolitical tensions, together with countries’ further “reshoring” of supply chains back home.

Another question raised was whether the panellists saw any silver lining from the dark clouds of the pandemic.

Takeuchi argued that the post-pandemic world would shift to a “new normal” rather than to the old ways.

“With everyone now working from home, every individual is experiencing their own digitalisation. On top of e-commerce, digitalisation will spread to medical and educational [fields], it will accelerate and there will be positives for productivity and new ways of living and working,” he said.

“Second, the supply chain will be remodelled. The driver is not economic optimisation but sustainability, risk consciousness or security. In the new revised regional model, supply chains will be more sustainable and community driven.”

Kiso also saw positives, including the realisation that reduced energy use, including from coal-fired power, is feasible. This realisation could have great benefits for the environment.

He also highlighted a recognition that traditional Japanese corporate practices may be changing, as the old model of working long hours at the office is being challenged.

“People can work from home, be with their family and do more productive work,” he said of the current situation. Post-coronavirus outbreak, he added, “people will start to put more emphasis on their life and what their heart is looking for; that’s a major positive change.”

However, he warned of possible structural changes to the travel industry as a result of people traveling less, which could impact major airlines and hotel chains. He suggested the government target its spending carefully while considering both jobs and “fundamental changes in industry itself.”

With Japan and the world still getting to grips with COVID-19, there is certain to be more debate on the post-pandemic future and how finance as well as other sectors can shift to a new reality.