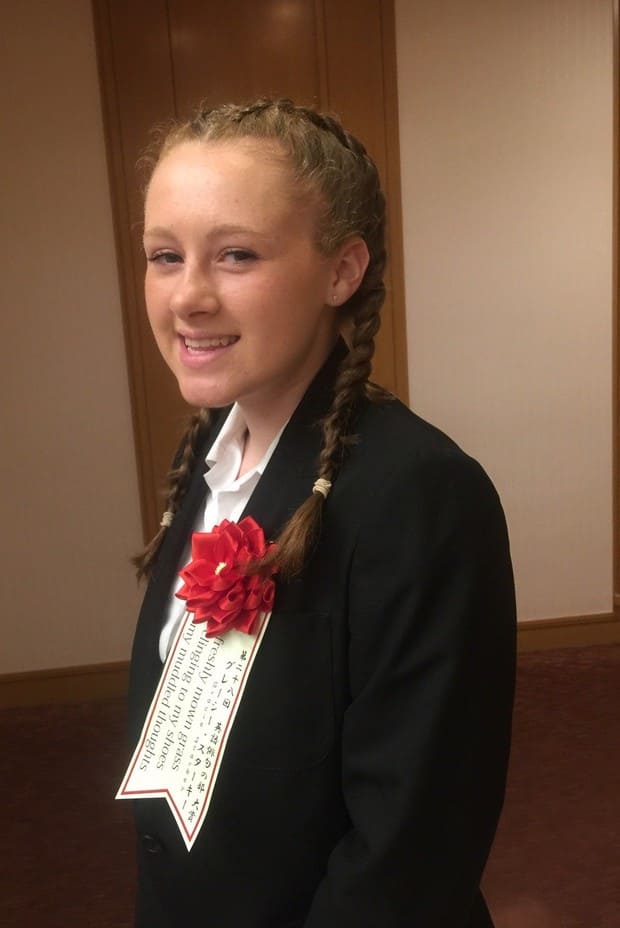 Gracie Starkey, 14, was one of more than 18,000 people who entered an English haiku poem in the multinational drink company’s Oi Ocha New Haiku Competition. Although the Japanese haiku contest was subdivided into five divisions, from primary school age to pensioners, the English prize involved all entrants competing together.

“The competitors’ age and nationality are not disclosed to the judges until the winners are decided. When the judges realised that a British schoolgirl had written such a wonderful haiku they were so surprised,” competition spokesperson Yuuki Yamanishi told the BCCJ. “It shows such sensitivity.”

Her winning submission was:

clinging to my shoes

Ms Starkey travelled to Tokyo with her mum Victoria for a ceremony which she described as “amazing.” Aside from immediate family members, she told friends she was in a remote location in Wales, to ensure secrecy before the unveiling of the winners.

In addition to a cash prize, Ms Starkey’s haiku and name will be featured on the labels of Ito En’s green tea bottles this season.

Mr Yamanishi is unaware of how many labels have been printed since production began in August but is confident that the special bottles are far and wide as the company is Japan’s top distributor of green tea. He said the company is “delighted to feature Gracie’s splendid haiku.”

He pointed out that Ito En runs the annual competition to support the art of haiku. “We realised that haiku poets had no platform on which to display their work so we thought of putting their haiku on our packaging. At first, English haiku looked out of place on our bottles amongst our Japanese text but now we are so happy to see it,” he said.

Ms Starkey was encouraged to enter the competition by her Japanese teacher Satoko Suzuki, who gave a speech at the Tokyo ceremony.

Following the events from Wycliffe College, which has offered Japanese language as a subject for more than a decade, head of school Nick Gregory described the win as “a truly exceptional achievement” and “a tribute to all those who have taught Japanese [at the college] over the years.”