British education in the 21st Century Unprecedented opportunities await British education providers in Japan in 2019 and 2020 thanks to the country’s hosting of successive key global events, but challenges remain in selling the product. That is according to attendees of a UK–Japan 21st Century Education Roundtable hosted by the BCCJ in January.

Education has long been an important export for the UK. The sector has grown by 4% per annum for the past decade and, in 2020, the education-related export market is expected to be worth £21.5bn, rising to £26.6bn in 2025. What’s more, education has added value. It can boost national image and encourage investment, business, and cultural bilateral ties, further boosting the economy.

Approximately 7% of the BCCJ’s membership consists of firms in the education sector, many of which were represented at the event. Although those organisations are diverse in mission and audience, they share a desire to raise awareness of UK education while maximising opportunities to shape Japanese society in the next few years.

The British School in Tokyo (BST), for example, is encouraging its pupils to consider the process of hosting the 2019 Rugby World Cup (RWC) and Tokyo 2020 Olympic and Paralympic Games, to learn planning and delivery skills. Work is also underway to use the events to explain why global citizenship and diversity and inclusion are essential for society.

In sport, Shibuya International Rugby Club, which was set up ahead of the RWC, is using rugby both to transcend language and to foster communication between children of different backgrounds.

As host of London 2012 and the 2015 RWC, the UK is also poised to provide takeaways for Japan. Universities in the UK used the events for self-promotion, so their activities may be useful to their Japanese counterparts. Also, on the theme of collaboration, one attendee shared that a Japanese delegation has visited universities in the UK to learn about sports hospitality.

Meanwhile, the UK in Japan event (the UK–Japan Season of Culture), which will run from the launch of the RWC to the close of the Paralympic Games, is expected to benefit the education sector through new bilateral partnerships and greater understanding of the UK. Led by the British Council, the showcase aims to promote the UK as an attractive destination in which to invest, study and travel.

Other events, albeit in Osaka, include the G20 Summit in June and the World Expo in 2025. 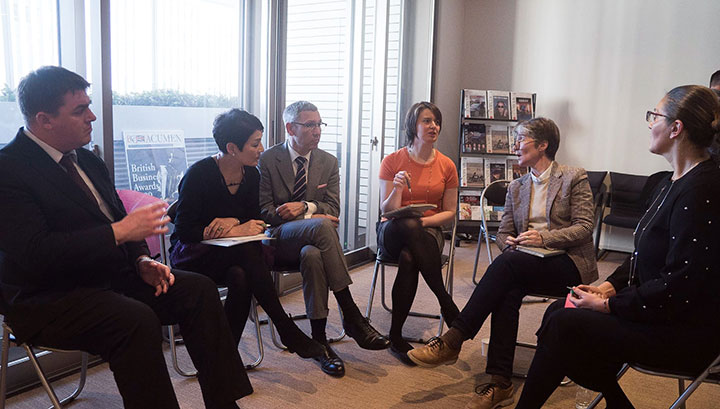 Attendees noted a change in the expat community in recent months due to an influx of foreigners to work in Japan in connection with the RWC and Tokyo 2020. They predicted such arrivals will continue in the coming months.

With a rise in international families comes greater demand for an international education. Though an opportunity, this presents a supply problem as most international schools have waiting lists. Moreover, as there are more families with two working parents among the new arrivals, there is a need for longer day care and after school programmes for children. This demand, said attendees, could drive the creation of new British education facilities and offerings for two-working-parent families, thereby helping facilitate social change.

Though there is demand for a British education among the foreign and biracial community in Tokyo, attendees questioned if young people, companies and the general public in Japan are as enthusiastic about the benefits of an international education as they were a generation or two ago. They pointed out that research shows Japanese people are less interested in studying abroad. According to Japan Student Services Organization, more than 60% of Japanese students at overseas universities stayed for less than a month in 2015, up from 46% in 2009.

While attendees admitted that fostering young people’s interest in a global education needs to be part of a wider discussion on Japan’s thoughts on internationalisation, they noted a requirement to raise awareness of UK education and how its unique qualities can develop skills in young people that employers need for tomorrow’s world.

Key to succeeding in this goal is analysing the perception of UK education in Japan to get a clear understanding of the sector’s situation and targets, according to attendees.

As testimonials are a powerful influencer, famous people who have studied in the UK could be catalysed as advocates. Attendees pointed out that there is no shortage of options, including members of the Imperial Family.

Utilising digital innovation and technology, too, is important as it can support tools for learning and provide channels for communicating to the public.

Attendees also suggested the development of a British library that could act as a hub for the community and showcase for UK education. Information sessions with experts and seminars with Japanese returnees who have experienced the British education system could be held.

Education was recognised as critical to business because it has an impact on the availability of human resources equipped with necessary skills. On the other hand, greater business expertise would benefit the education sector.

Attendees concluded that Japan’s hosting of globally significant events in the next few years could act as a catalyst to boost British education in Japan. Not only do they present the opportunity to teach young people important lessons, they also inspire a generation and mobilise people to make changes to their world.