Beyond COP26: From Discussion to Action

Written by Sterling Content
March 10, 2022
Past Event Round Ups 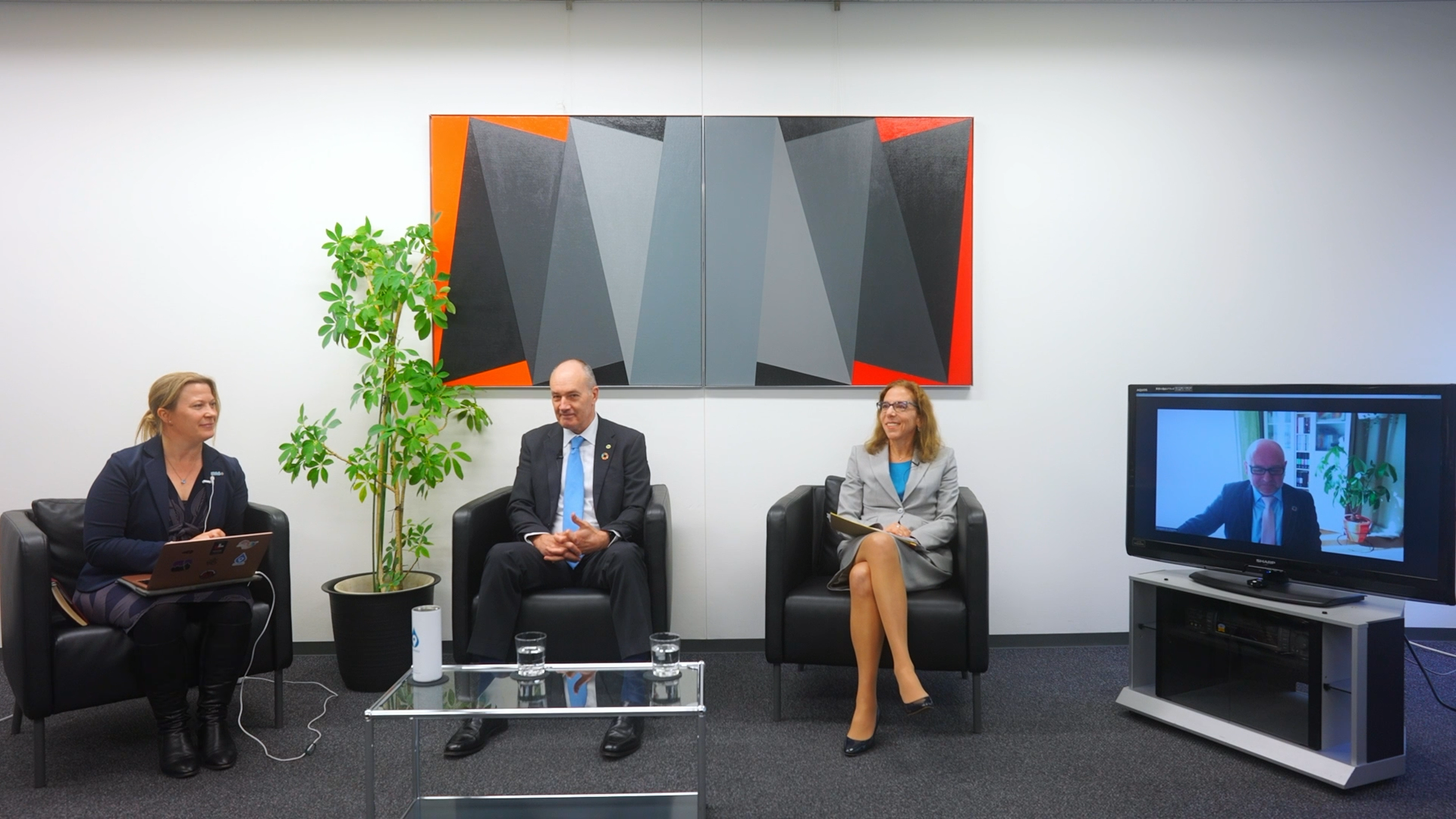 Written by Sterling Content
March 10, 2022
Past Event Round Ups

Greening supply chains and embedding ESG into organisations were among the topics raised during the British Chamber of Commerce in Japan’s third joint-chamber COP26 event, Beyond COP26: From Discussion to Action, on February 21.

Naomi Cowan, head of energy and climate change policy at the British Embassy, Tokyo, kicked off the event with a video presentation on the key takeaways from COP26 and what needs to happen next.

The 26th UN Climate Change Conference of the Parties (COP26) in Glasgow saw 197 countries agree to the Glasgow Climate Pact, which builds on the Paris Agreement adopted at COP21 in Paris in 2015. It outlines guidelines on how the agreement can be delivered and sets out frameworks for limiting the rise in global temperature to 1.5˚C, including ground-breaking language on phasing out coal.

“One target for COP26 was to keep this 1.5˚C goal alive,” explained Cowan. “For some countries, 2˚C would be a death sentence; 1.5˚C gives hope, but it can only be achieved with a concerted effort now.”

As a result of the summit, more than 90% of the world is covered by net zero carbon targets, up from 30% two years ago. In addition, 154 parties have submitted new national targets representing 80% of global emissions.

“Countries have come together and showed their ambition,” she said. “Now action by all of us—governments, businesses and individuals—has to take place … We need to enable the rapid net zero transition as soon as possible.”

Looking at Japan, she welcomed the green commitments made by Japanese government, industry and business ahead of COP26, including the signing of the Race to Zero Campaign by more than 60 companies.

Businesses around the world, she added, need to make appropriate business models “to divert away from, manage or adapt to” the risks of climate change. They also need “to call on governments to set the right policy and regulatory framework to enable transition to net zero.”

Alistair Dormer, representative executive officer of Hitachi Ltd—the only major Japanese corporation to be physically present at COP26—said the event had “amazing energy,” especially considering the uncertainty about how it would be staged due to the pandemic.

“The achievements made exceeded expectations. We got commitments; we got people engaged,” he said, adding that COP26 offered Hitachi “a once-in-a-lifetime opportunity” to have conversations on how to form partnerships towards zero carbon with government, financial partners and the community.

Jenifer Rogers, general counsel Asia, Asurion, said she has personally observed “a real acceleration in the commitment and timeframe to net zero emissions,” in the lead up to COP26. She noted the importance of the Glasgow Financial Alliance for Net Zero, which offers capital commitment for companies to deliver on their promises.

For Japanese companies, Rogers said the energy-related shift away from fossil fuels alongside the commitment to deforestation would be significant. Although Japan wasn’t a signatory to the transition statement regarding usage of coal, other countries’ phasing out of coal could “increase stakeholder pressure on companies in Japan to get out of non-clean energy,” she said.

While Aragon St-Charles, global head of ESG, Dentons, recognised “some tremendous successes” at COP26, he said the summit also “disappointed and didn’t go far enough” in terms of “dedication to concrete action.”

Research released during the conference, he explained, shows that current plans laid out by countries would result in a temperature increase of 2.4˚C by the end of the century, which would put 1 billion people under heat stress, double the extinction of plant species and increase the sea level by 6 metres in vulnerable parts of the world. This points to a “lack of necessary urgency” on the part of certain sectors and governments, he said.

As more and more global companies are making net zero commitments, St-Charles noted that they are committing to clean up their supply chains and broader value chains.

Suppliers are therefore “finding themselves being asked to be transparent about their carbon emissions strategies and targets,” he said. “The risk for companies is that if they’re not advanced along this journey, they could lose business if they don’t make radical, transformational and very costly change.”

There may even be loss of investment funding or increased pressure from activists or stakeholders. Such threats, he said, bring opportunities for companies to evaluate how their businesses are run and how to truly pursue the “triple bottom line—people, planet and profit.” This is a key shift as making profit with purpose is of growing importance to consumers today.

Dormer agreed that collaboration with companies in the supply chain is vital for greener outputs, pointing to Hitachi’s request to 70% of its 30,000 suppliers in Japan to provide information on their zero carbon plans. The company is developing a set of tools that visualises a machine’s energy consumption and uses blockchain to notify the customer if the machine is using renewable energy. For the long-term survival of businesses, he added, investments to become greener will need to be made.

With the pandemic exposing supply chain weaknesses, including their location and levels of compliance and due diligence, the panellists noted that companies are dedicating more time to understanding their suppliers.

Regarding governance in Japan, Rogers said the pandemic has “turbo-charged” the need at board level to consider sustainability as “an imperative.” This trend builds on recent amendments to Japan’s corporate governance code, which came into effect in 2015. Obligations now include publishing a sustainability policy and disclosing voluntary targets for female, non-Japanese and mid-career hires at management level.

With pressure on from government and investors, organisations are having to adapt and change internally, such as by creating “holistic sustainability committees” to cut across divisions and by bringing in sustainability experts to make sure targets are set, monitored and disclosed effectively, she said.

St-Charles pointed out that institutional change needs to be driven at executive board level, where the risks and opportunities can be addressed. “ESG needs to be embedded within operations,” with all teams “working in concert on a global plan that is defined, set using science-based targets, measurable, and reported via a gold-standard reporting framework like CPD” (a not-for-profit that runs a global disclosure system for managing environmental impacts), he said.

Rogers pointed out that the proliferation of sustainability committees run by senior management, including representative directors of boards, shows top-level engagement. Still, engagement is also required at every level. By employing more young people with a strong sense of social responsibility, organisations might be able to experience a shift in mindset and become more ESG-oriented, she said. Another way to motivate and drive the required behavioural change in organisations is to link compensation for executives to ESG imperatives.

Connecting all parts of the organisation with the same ESG purpose-led management, added Dormer, is another key way to engage the entire team and produce greener results.