Written by Sterling Content
November 10, 2017
Past Event Round Ups 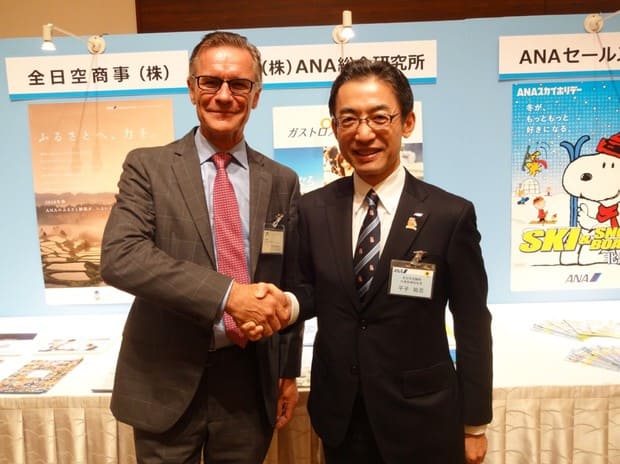 Written by Sterling Content
November 10, 2017
Past Event Round Ups

We are very pleased to announce that BCCJ member and Walk Japan CEO, Paul Christie, has been appointed by All Nippon Airways as ANA Nihon no Michi Taishi (ANA Ambassador). In this role he will advise ANA on inbound tourism into Japan and the sustainable revival of the nation’s countryside.

Paul’s appointment as ANA Ambassador recognises Walk Japan’s success both in developing tourism in Japan, particularly in the nation’s provinces, and also with its Community Project, promoting revival of the rural community on the Kunisaki Peninsula in Kyushu, since its founding 25 years ago in 1992.

National Geographic has described Walk Japan as “one of the 200 Best Adventure Travel Companies on Earth”. The company leads the way in providing the most fulfilling and enjoyable tours available in Japan. Walk Japan has an unrivalled range of regular, scheduled tours for Japan and is researching more for the future. It also creates and runs private, custom tours tailored to customers’ particular interests and requirements. These include private tours for families, friends, societies, companies and schools.

Founded in 1992 by two academics, Dr. Thomas Stanley and Prof. Richard Irving, the company has since grown considerably both in its number of tours and customers to become the acknowledged leader of specialised tours that immerse visitors in Japanese society and culture; provide great insights into the nation and its people; and often explore little-visited, beautiful and diverse regions of the nation.

Based in rural Kyushu, Walk Japan actively operate in a way that recognises the important role and responsibilities that business has in society. This means being committed to and supportive of the communities in which they operate and ensuring that their tours have a positive impact in these areas. Wherever possible Walk Japan uses and supports family-run and local businesses.