Baroness Virginia Bottomley at the BCCJ

Written by Sterling Content
September 28, 2017
Past Event Round Ups 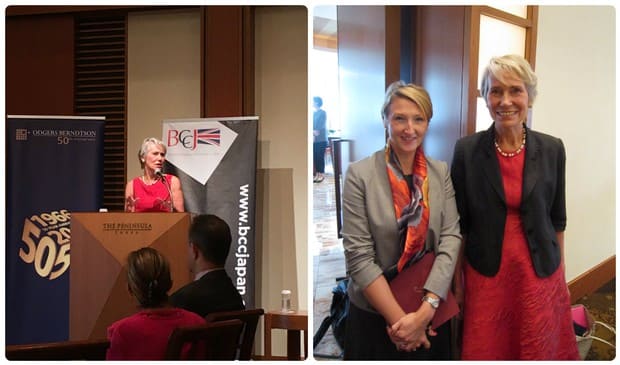 Written by Sterling Content
September 28, 2017
Past Event Round Ups

According to Baroness Virginia Bottomley, head of board practice at Odgers Berndtson, getting the best solutions for business requires input from people of different nationalities, personalities, skills and genders. This imperative, she says, is even greater in the boardroom, where organisations facing ever more complex issues also need external, independent perspectives.

At a BCCJ breakfast event on 22nd October, Lady Bottomley outlined why diversity and inclusion make commercial sense and how a balanced, effective board can ensure good governance.

While the UK now benefits from a strong reputation for corporate governance, Lady Bottomley pointed out that the principles are largely the result of earlier corporate scandals caused when “too many businesses were being run by the business, for the business.” People sought to review governance as things began to go wrong and, in the early 1990s, the benefit of independent non-executive directors was established.

“The role of the independent chair is to be a sounding board and critical friend, to challenge the executive and operations and ensure the governance is rigorous, to ensure that the integrity is thorough and that there is no inappropriate business behaviour,” she said.

Explaining that 10 years ago “independent directors hadn’t fully got their act together,” Lady Bottomley recalled being a non-executive board director of a company where the chairman asked her not to visit its sites or contact any members of its executive team.

Today, however, the situation is entirely different. As a non-executive director at Smith & Nephew, for example, she is invited to “talk to anyone and to ask questions.”

She attributes the change in attitude—seen among companies nationwide—to the contribution that these non-executive directors have made and the extensive work carried out to train them in their responsibilities. Critical, too, has been the 1998 financial crisis, which made people realise the importance of asking questions and avoiding the ‘group-think.’

Seventeen years ago, when Lady Bottomley accepted her role at Odgers Berndtson, the UK’s number one executive search company that searches for chairs, chief executives and non-executive directors of commercial businesses and public bodies, “nearly everyone on boards was either male, a finance director or a chief executive. Anything else didn’t count,” she said. Now, though, “it’s totally different,” she added. Companies seek insights from various kinds of people.

“My father’s generation joined a company for life, and I understand it’s still like that for many people in Japan but, increasingly, modern careers are spent in different sectors,” she said, pointing out that organisations frequently “want what they don’t have and what they haven’t grown.”

Lady Bottomley expressed confidence that more women will gain senior positions on boards. Demand exists and “no longer can you say there is any role that a woman can’t do,” she said.

A woman was first appointed chief executive of a FTSE 100 company in 1997; there are now seven female chief executives of FTSE 100 companies, equating to 10%. A female president sits in the UK’s Supreme Court; a woman is head of the CBI, the UK’s premier business organisation; and there are women bishops in the House of Lords. The proportion of female vice-chancellors has risen from 12% to 25% over the past 10 years.

So why are there still so few women on boards? The answer, says Lady Bottomley, is largely pipeline; many women in business are still working their way up the organisational ranks.

But opportunities exist—for women and for those who have had a more flexible career or are in the field of professional services.

“More and more companies find that, if they can’t change their own board rapidly, an international advisory board is incredibly useful,” she said, pointing out that it gives “global input, perspectives, challenge and debate.”

As a member of the International Council of Chugai Pharmaceutical Co. Japan, she is joined by eminent experts from the field of medicine and life sciences, as well as, an economist, a lawyer and a number of other people with “different distinguished experiences and backgrounds.” Their nationalities are also varied, which Lady Bottomley believes is essential, in order to provide a global perspective.

“One of the key qualities of business today is cultural sensitivity: companies require people who can work in different countries and in different ways,” she said. “Team-working is different. A command and control leadership style isn’t the way forward for innovation, for creativity or for being agile.”

Staff and boards of companies should also represent and reflect the communities they serve and be integrated with the stakeholders to whom they answer.

“For businesses to grow, prosper and develop the wealth that countries need to fund welfare, they have to maintain public confidence,” she said. “If we have learned anything from the Brexit debate or analyse Donald Trump’s victory, it’s that the results were partly caused by the left-behind communities feeling alienated and disenchanted by globalisation and cynical about business.”

Boards in the UK, she says, reflect this need for global understanding and global diversity; there are virtually none consisting of exclusively British people. The board of Smith & Nephew, on which Lady Bottomley sits, is made up of four Brits (including her), two Americans, one Frenchman, one Indian, one Italian and one Swede. Three members are women. Moreover, in FTSE 100 companies, 40 chief executives are not British, while 30 chairman are not British.

In a thought-provoking question and answer session led by BCCJ members and guests, Lady Bottomley offered takeaways for the audience about how they might apply British learnings in Japan.

While she admitted that language issues could make it more difficult for non-Japanese people to be adopted onto Japanese boards as non-executive directors, she suggested international advisory boards might be a valuable alternative. Many foreign companies in the UK, including some from Japan, have set up a UK-based advisory board to develop a greater British identity and connectivity.

“How can people judge what is best for a global business without global experience? You have to argue the business case,” she said.

To slow Japan’s low population growth and support the economy, good conditions at work and the ability to continue a career after having children is also vital for women.

“I started actively promoting the case for women in the work force and the particular requirements they may have when I was Secretary of State for Health,” she explained. “There were about a million staff in the [National Health Service] and three quarters were women. It took half a million pounds to train a doctor so if we couldn’t keep a female doctor part time when her children were young, we were losing our investment.”

While childcare is a key factor, which Lady Bottomley said women need flexibility to manage, help in the house is also important. Ten of the chief executives of India’s banks are female, which she attributed to the extended family and the availability of low-cost labour for childcare and household tasks.

When asked how women in Japan might be supported up the pipeline, Ms Bottomley pointed out that many senior roles require the applicant to be a “peacock”, to promote themselves, but women tend to stand back and look for encouragement before making a move.

She said women should “stop whining and start winning” in order to seize the opportunities available to them now that women are increasingly wanted in the workforce. But she also said that more gender-awareness training was needed for both men and women to improve understanding of women in the workplace and offer them appropriate mentoring.

“When a woman says she’s feeling nervous and she can’t do it, it is often her way of preparing for the challenge. She’s going to do a perfect job,” Lady Bottomley explained.

Not a fan of quotas, Lady Bottomley pointed out that the rapid increase in the number of women on boards in the UK has been due to a voluntary code, prominent leadership from male and female chairs, the 30% Club—a UK campaign for FTSE 100 boards to be 30% female—and a “tremendous program of naming and shaming.”

As many companies in Japan have at least one woman on their boards, she suggested that the country has reached tipping point, from where the pressure on companies to change can be stepped up. What’s more, in future, the purchasing power and influence of women will become increasingly decisive.

Of the myriad reasons for adopting diversity and inclusion in business, Lady Bottomley believes that, in Japan, as frequently elsewhere, it will be the economic reasons that will drive real change.