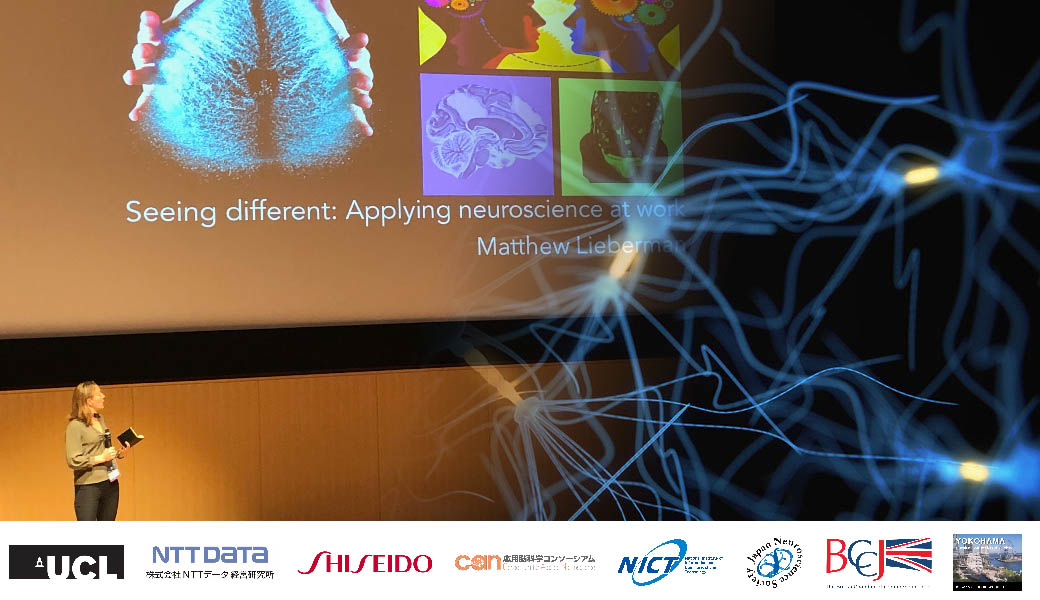 British and Japanese academics are eyeing the 20s as the decade for fast-tracking neuroscience applications for business following a successful inaugural bilateral conference on the topic at Shiseido Global Innovation Center, Yokohama.

Organized by University College London and NTT Data Institute of Management Consulting Inc., the three-day event brought together academics and business professionals in an innovative collaboration.

“Applying Neuroscience to Business” received support from academia, the private sector and government. It was sponsored by the Japan Neuroscience Society, the Consortium for Applied Neuroscience, Shiseido Company, the BCCJ, Yokohama Convention & Visitors Bureau and Japan Marketing Association. Financial support, meanwhile, came from the International Exchange Program of National Institute of Information and Communications Technology and the UCL Knowledge Exchange and Innovation Fund.

The event’s 250 attendees welcomed the format of keynotes, roundtables, poster sessions and a Neuro-Hackathon to facilitate opportunities for discussion among two groups that rarely have opportunities to interact.

“The advancement of neuroscience has great potential to enrich our lives through catalysing innovation, but the fruits of neuroscience have often been confined to the academic world, with limited opportunities for the public to benefit,” said the co-organizers. “Meanwhile, knowledge gained from neuroscience research has also been used as marketing copy for products and services, despite lacking concrete scientific evidence.”

The purpose of the conference was therefore to encourage understanding between industries, cut through jargon, provide context and promote dialogue and collaboration. Attendees were encouraged to consider how behavioural sciences, behavioural economics, psychology and neuroscience can be applied to offer support to not only businesses but also social enterprise, public health and education.

According to keynote speaker Hilke Plassmann, INSEAD’s octapharma chair of decision neuroscience, the event’s revolutionary approach of bringing together academics and businesspeople broke down barriers and sparked potential collaborations in the future.

“There have been frustrations to work with each other. Businesspeople want results tomorrow. Academics need a year to produce anything,” she said. “So, what is great about the conference is that all attendees were excited about making it work.”

For Joseph Devlin, professor of cognitive neuroscience and vice dean of the faculty of brain sciences at UCL, the event was also an opportunity to open up the field of neuroscience beyond companies with teams of researchers to include interested individuals and small or medium sized enterprises.

Plassmann pointed out that although neuroscience “can never be a silver bullet,” there are several examples of its ability to help predict market-level outcomes. Academic labs around the world including Stanford University and Erasmus University have been working on this for a few years.

Brain imaging can be useful for understanding consumer responses. Activation in the brain when a subject is shown a product and then its price, for example, will show a positive and/or negative emotional response. These responses can be used to predict whether he or she will buy the product, thereby shedding light on how consumers’ value a product.

In the area of the placebo effect, Plassmann carried out a study on the reactions of people to wine. Wine was placed in five glasses; two were the same variety but given different price tags, either low or high. Subjects wore an eye scanner and had a tube in their mouth to evaluate their five senses. The brain study showed the subjects enjoyed the average wine more when it had the expensive price tag. However, it also showed that putting the high price tag on the poorest-quality wine had a negative impact, prompting Plassmann to conclude that companies “have to deliver on quality; simply putting on a high price will backfire.”

In short, firms can tailor or market their goods and services based on their better understanding of what underlies decision-making. Studies to date include how people buy consumer goods based on their reaction to advertisements, whether a project would be crowdfunded based on asking questions about the funding request and whether a song would be a hit based on people’s brain activity when they listened to it.

Specifically, in the area of beverage development, Asahi Quality and Innovations Ltd. is using neuroscience applications to understand the optimal flavour design for various craft beers among different target markets.

For Devlin, the applications for neuroscience reach far beyond the corporate world, to the public, government and third sectors. Researchers have found the potential of neuroscience to influence public health by predicting people’s behaviour and behavioural change. Studies include analysing people’s reactions to wearing sunscreen, doing more exercise, sleeping and quitting smoking, which Devlin says are “encouraging first steps that highlight the potential in this area.”

With an understanding of what influences people’s decision-making, healthcare of the future may be increasingly tailored to the individual and offer more effective preventative measures.

Devlin expressed his thanks to Japan for supporting the conference, describing it as a leader in the field of neuroscience applications for business, alongside France and the United States. The UK, he said, lags at present but, thanks to the first successful collaboration with Japan, the future looks bright.

“We need more academic leadership from UK universities, but I think this will develop in the coming years. We are not at the cutting edge, but I see it as an opportunity, not a problem,” he said.

The second annual Applying Neuroscience to Business event is planned tentatively for Yokohama, with a third in London.