Written by BCCJ
April 2, 2019
Past Event Round Ups 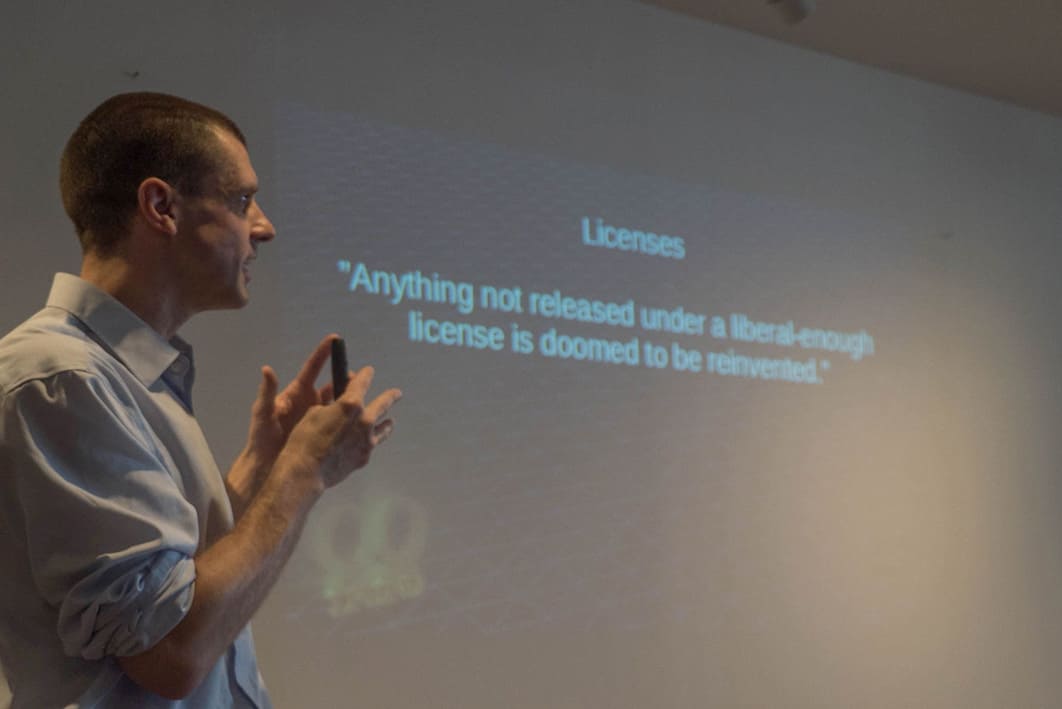 Written by BCCJ
April 2, 2019
Past Event Round Ups

In March, BCCJ members and guests were given a hands-on demonstration on the current state of AI, machine learning and open data as well as what it means for business, from data scientist Darren Cook, director at QQ Trend.

Entitled “AI Under the Hood: Turning Water into Gold,” Cook’s presentation at the BCCJ Office in Tokyo was part of BCCJ 5.0, which aims to introduce members to innovation in ground-breaking topics, including AI, to help deliver firms’ sustainable growth.

Research and advisory firm Gartner predicts that, by 2020, AI will create 2.3mn jobs, while eliminating 1.8mn. Amid the opportunities and challenges posed by the technology, the interactive session therefore posed the question of what the future holds for business, including in Japan.

Cook shared that, in his specialty of text-based AI, a large volume of online data is helping AI decipher languages, to deliver services such as virtual assistants and chatbots. Algorithmic advances in recent years have made AI better at delivering online functions such as search, translation and writing, and propaganda and fraud detection.

However, linguistic challenges remain, such as the existence of many possible meanings for a word or phrase and names or places that require historical or social context for understanding.

Cook admitted that while the human brain can handle this kind of “fuzzy data and context,” machines cannot; they need vast volumes of data to learn on a trial-and-error basis.

Nevertheless, he pointed to tangible progress over the past five to 10 years.

“Computers can now tell the difference between cats and dogs,” he said. “And you can see cars driving down the road with no human behind the wheel.”

Driving this revolution is the growth of Big Data, said Cook, suggesting that more data would result in fewer errors in training machines, along with more powerful computers.

“Deep learning [used by AI] is based on numbers; you have to find a way to feed in numbers. When the machine sees a cat or dog, it doesn’t see the pictures, but pixels,” he said.

Yet, the volume of data that machines would require to deliver complete accuracy in text processing does not exist, indicating the limitations of AI at present and the challenges that the industry faces.

“We need more data … but you reach a limit. I think Google is working on six billion sentences, but to get another 20% reduction in errors, you will need 54 billion and that data doesn’t really exist,” he said, adding that progress in the field of AI is therefore “unknowable.”

Instead of eliminating the need for people, AI can act as a support tool to help people do their job better or do new jobs, explained Cook.

He pointed to a Japan-based client that has developed a text editor aimed at professional translators.

“Rather than using these technologies to do machine translation, it’s bringing in the same tech to enhance human experts and make them more efficient,” he said.

The trend towards collaboration within the AI field also heralds new opportunities.

“There have been new algorithms developed and there’s also been a trend with people being much more open. Competing companies publish their research, often in enough depth for a competitor to copy it, and their code is often open source,” he said.

“It’s unthinkable for people brought up in a competitive corporate environment, but if everyone does this, everyone benefits … And, because we have reached the point where we can make products out of AI, the big companies are competing over it and putting a lot of resources into it.”

A who’s who of the tech world has heavily invested in AI, including Amazon, Apple, Facebook and Google along with Japan’s SoftBank. Japanese insurers and real estate firms have been among those to embrace AI and, at the government level, the Ministry of Economy, Trade and Industry has invested billions of yen into next-generation semiconductors and other technologies crucial to AI development.

Cook said data has been described as the “new oil” but added that it should instead be called the “new water: an essential commodity for society.”

Yet, he said it still works more like stage magic than that of fictional magician Harry Potter.

“In stage magic, you take your cup, put in your data, give it a twirl and up comes gold. If I put in the data and someone says make a white dove, it can still only produce gold,” he said.

According to Cook, the value of open data, such as Wikipedia, cannot be underestimated as a means of machine learning and providing information. However, algorithms can still be fooled by those seeking to subvert them, he said, noting that “if you check references to a Facebook article, you can be led on a wild goose chase.”

Other open data sources include Wikidata, a form of Wikipedia designed for machines to use; OpenStreetMap, a community-driven map of the world operating under open license; and Open Data Barometer, a global measure of how governments are publishing and using open data for accountability, innovation and social impact.

According to Open Data Barometer’s 2018 survey of 30 governments that have made “concrete commitments to champion open data,” the UK and Canada are joint leaders, with Japan placed seventh alongside New Zealand.

But not all countries and organisations are so open about their data.

“There’s the ethical question: is open data a human right? Should we have access to the sum of human knowledge, or should companies be allowed to control part of it?” Cook asked.

Concluding his presentation, he urged for greater freedom of data globally.

“We need to get away from the idea that each company is going to spend money on collating its own data, which is basically the same data everywhere. It’s a waste of human resources and it stops new and interesting applications being created,” he said.

In each and every interaction, individuals unconsciously reinforce, accept or challenge societal nor ...

On July 5, the British Chamber of Commerce in Japan invited an expert panel to discuss recent develo ...

The role of Tokyo and London as financial centres was the theme of the British Chamber of Commerce i ...