Written by Sterling Content
February 6, 2019
Past Event Round Ups 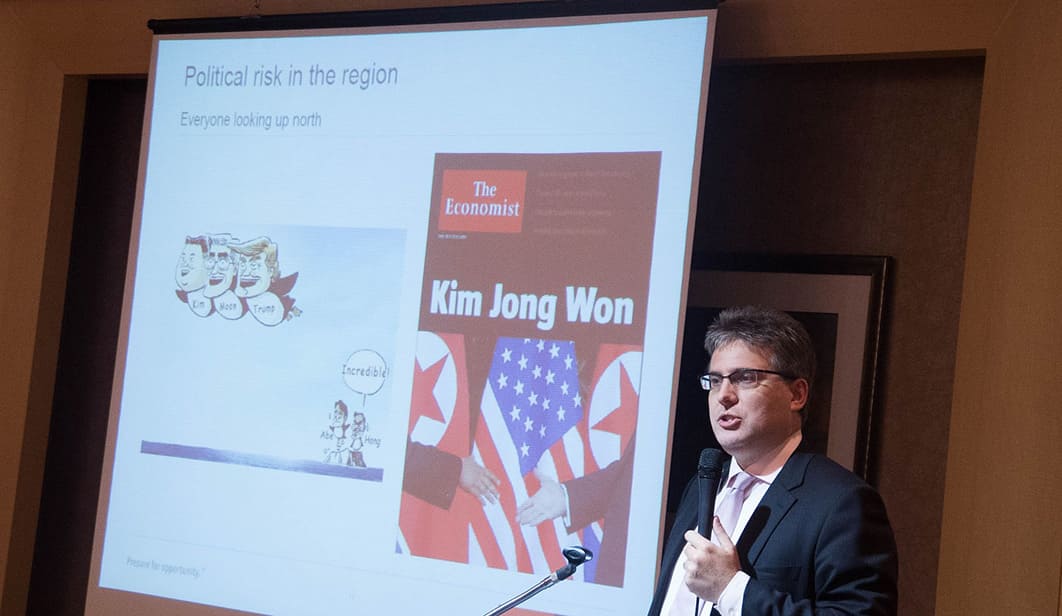 Written by Sterling Content
February 6, 2019
Past Event Round Ups

BCCJ members and guests gathered at a luncheon on January 30 for a “2019 Global Forecast” courtesy of BCCJ Executive Committee member and Director of the Economist Corporate Network, North Asia, Dr Florian Kohlbacher.

Drawing on his expertise in analysing risk, Kohlbacher provided an outlook for the year ahead—for the world, for Japan and for business.

The US and China

In broad terms, Trumponomics, the economic policies of US President Donald Trump, are expected to dominate the global economy in 2019. China, meanwhile, is likely to become increasingly assertive in geopolitical terms and poses the biggest risk to the global economy.

According to an Economist Intelligence Unit (EIU) ranking of the top 10 risks to the global economy, the US–China trade war and the possibility it may morph into a global trade war ranked first. Kohlbacher noted that aside from China and the United States, Japan and South Korea could also be badly affected by the bilateral trade tensions.

Prolonged economic downturn in China and hostilities in the South China Sea also made the top 10. Other risks include tensions on the Korean peninsula and the loss of Japanese influence in Asia due to China’s increasing dominance.

Brexit was ranked 10th, largely due to the uncertainty it is causing, but Kohlbacher noted that Brexit does not trump Trump or China in terms of global risk. Whatever the outcome regarding the UK’s relationship with the European Union, the UK’s economy is “very strong and resilient,” he said.

A key theme for 2019 will be “slowbalisation” as “globalisation has given way to a new era of sluggishness,” Kohlbacher said. While the world’s economy grew by 3% on average in 2018 it will drop to 2.8% on average this year.

Most countries in the world will experience deceleration in economic growth, but Japan is expected to experience an uptick in 2019, largely due to the consumption tax rise to 10% in October 2019.

“People are going to consume more ahead of the hike, which will spark consumption and drive the economy,” he said, adding that the impact of the hike will be felt in 2020. “It is ironic that despite the Olympics, 2020 will be the worst year for Japan in our five-year outlook, with at last one quarter becoming negative.”

Still, Kohlbacher called for positivity about the Japanese economy, pointing out that in terms of GDP per capita, Japan is outperforming the US economy by narrow margins.

“For a mature economy with an ageing and shrinking population, Japan is giving quite a good performance,” he said.

Although the Economist’s Big Mac Index—based on purchasing power parity—shows the Japanese yen is 36% undervalued against the US dollar, he predicts it will depreciate by 1.2% this year, to 111.9 yen to the dollar on average. He added that all currencies in Asia are undervalued to various degrees. 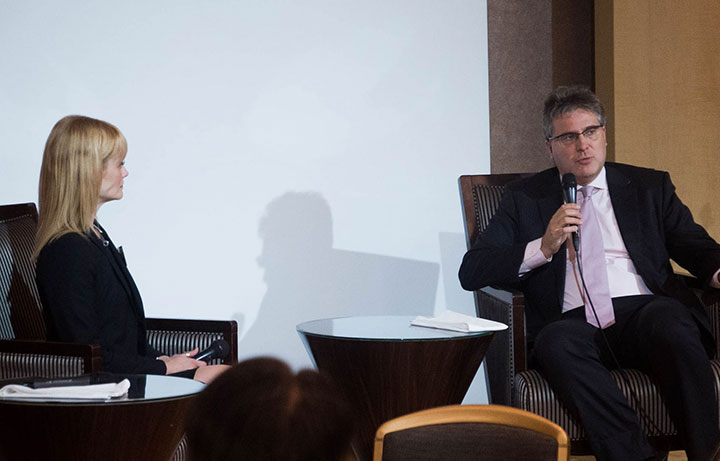 Views from the boardroom

According to The Economist Corporate Network’s Asia Business Outlook Survey conducted in December 2018, businesses were “fairly positive” about 2019. Though not as bullish as last year—thought to be a result of the US–China trade war—more than half of those in mature markets expect their business to expand, down about 10 percentage points from 2018.

But he pointed out that booming inbound tourism and the upcoming Rugby World Cup and Tokyo Olympic and Paralympic Games should make businesses “optimistic” about Japan’s prospects.

According to Kohlbacher, “a strong uptick” in the number of recent visits to Japan by global chief executives indicates that “Japan is in the limelight.” Meanwhile, “doing business in China is becoming increasingly difficult due to political reasons, so people are rediscovering Japan.”

The survey also shows that business executives are looking at Tokyo as a hub for regional operations more favourably than before. Yet barriers remain, including property costs and lack or cost of talent compared to that found in Singapore and Hong Kong.

The positive outlook of firms is not reflected in the general population, however. Kohlbacher noted that consumer confidence in Japan is stable, but has been slowing down, depressing consumption

“Even though the economy is doing well, the impact is not trickling down into people’s pockets as wages have not really increased much,” he said. The result is that consumers are “holding back Japan at the moment.”

Globally, Japan is competing well in utilizing innovation for economic growth, he said.

In the 2019 World’s Most Innovative Economies Index, Japan fell to ninth position after placing sixth the previous year, but it remains the third-most innovative country in Asia, after South Korea and Singapore.

Meanwhile, in both the EIU’s 2018 Automation Readiness Index and Technological Readiness Ranking, Japan was ranked fourth globally. What’s more, in the 2018 Asia Digital Transformation Index, Japan was ranked second in Asia and fourth in the world, showing the country is consistently strong in this field.

Where Japan needs improvement, however, is social innovation, he added. The country was ranked 23rd out of 45 countries in the EIU’s 2016 Social Innovation Index.

He suggested that hosting the upcoming global sporting events offers Japan a huge opportunity to make improvements in this area. Ideas include using smart cities and the Internet of Things to help eliminate physical and social barriers to make Japan “a more liveable place” for all.

As GDP is closely linked to population growth, Kohlbacher noted that India’s economy will overtake that of Japan’s by 2027. By 2050, Japan’s economy is expected to have fallen from third to fifth or sixth globally, in terms of size.

However, he pointed out that Japan could operate as a lead market for innovation related to the ageing society. Some foreign firms have already arrived with that purpose.

“Longevity is an achievement, not a burden. If you can unlock the potential of the silver market, that is an opportunity. Japan has a bright future but requires a shift in perception [about its ageing society],” he said.