Written by Sterling Content
February 16, 2018
Community and Business, Past Event Round Ups 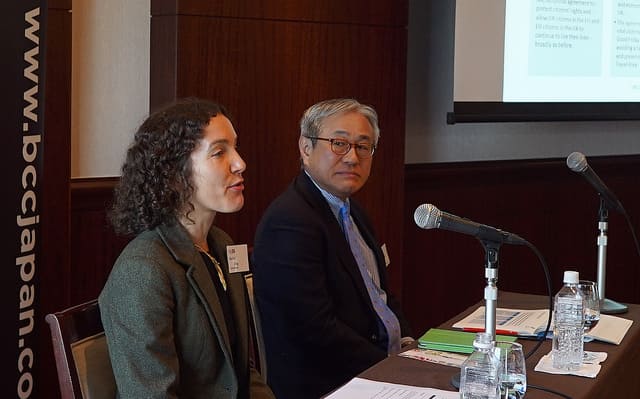 Written by Sterling Content
February 16, 2018
Community and Business, Past Event Round Ups

The new year has barely begun and market turbulence has helped shatter any complacency over the world economy. Yet, despite renewed volatility abroad and in Japan, analysts see a brighter global outlook aiding the world’s third-biggest economy in the Year of the Dog.

Speaking at the BCCJ’s “2018 Global Forecast” event in Tokyo on 30th January, the British Embassy’s Rachel King, Sumitomo Corporation’s Bob Takai and journalist William Sposato pointed towards an improved year for Japan and the global economy, barring any major shocks over Brexit, North Korea and the Trump administration’s trade policy.

While Brexit talks between the European Union (EU) and the UK continue, King noted that progress has been made, despite apparent divisions in the British Cabinet.

“One of my predictions for 2018 is that political noise over the negotiations won’t go away. But putting that to one side, real progress has been made in the Brexit negotiations already,” said King, minister counsellor for economic affairs at the British Embassy, Tokyo.

“In December, the EU Council agreed that sufficient progress had been made on three key issues to move onto the second stage of negotiations. What we’re expecting to see in coming weeks is discussion between the UK and EU over an implementation period, which is really key for stability.”

King said an approximate two-year implementation period was being proposed, in which the UK would exit the EU, but existing arrangements around the free market and customs union would continue.

“For direct investment, you need a clear vision for more than 10 years, so that’s the main interest from the private sector,” he said.

Takai suggested that Japan had enhanced its trade position through the Trans-Pacific Partnership (signed in 2016 though not in force) as well as an upcoming free trade deal with the EU. Such talks are thought to have the potential to influence the Trump administration’s approach.

“Japan is trying to create an environment in which the US has a rethink on free trade agreements on a global basis,” Takai said. “This may be why Trump said he’s going to have a rethink over the TPP.”

Former Japan editor for Reuters, Sposato, commented that despite Trump’s moves and unpopularity, the recent US tax cuts may help drive a stronger global economy.

“The US is now looking at 3% growth. When that first came up all the experts said it was impossible,” he said.

Takai said that Prime Minister Shinzo Abe had succeeded in establishing a friendly relationship with the leader of the world’s biggest economy. However, he said Japanese firms were concerned about Trump’s push to renegotiate the North American Free Trade Agreement.

“We’re concerned about these negotiations … especially in a year of elections, not just in the US but also Mexico, which has an election in July. If AMLO [Andrés Manuel López Obrador] becomes president, the situation could get messy: Trump versus Trump in Mexico,” he said.

Takai added that the Republicans could potentially lose control of the House of Representatives in upcoming mid-term elections, risking the possibility of Trump being impeached.

On North Korea, King said one positive is that “at least we are all united in what the problem is.” However, she added, “where the world is less united is what we should all do about this problem.”

“What we should be worried about is an accident, whether a genuine accident or one provoked by misunderstanding, mixed messages and rising tensions in the region,” she said.

Takai said talk of a “bloody nose” strike by the United States against North Korea was of “real interest to Japanese people as we are so close.”

“If a military conflict occurs, it would crush the Nikkei and send the Japanese yen to 90 and not 110, so that would have a big impact on the economy and politics,” he added.

Abenomics has entered 2018 in better shape than ever according to Takai, who pointed to a range of positive data, including rising gross domestic product and an end to deflation.

“Company profits have increased from 7 trillion yen in 1995 to 21 trillion yen: a three-fold rise over the past 22 years. And capital investment has increased by 20 trillion yen since 2010, so these are signs we are doing very well,” he said.

Other positive indicators include the tightest applicants to jobs ratio for 45 years, a falling unemployment rate and rising wages.

Takai noted improved female participation in the labour market, which has reached a level comparable to that of the US. Legislative changes eyed for the Diet in 2018 will impose restrictions on working hours, whose impact is expected to further increase female participation, he said.

Takai said Japan’s tourism boom has delivered a 3.7 trillion yen boost to the Japanese economy, although domestic consumption still needs to be lifted through higher wages.

“Next year’s consumption tax hike is the biggest issue for the Abe administration, so they have plenty of reasons to pump up the economy,” he said.

Other issues discussed by the panellists included China’s One Belt One Road Initiative (focused on connectivity and cooperation between Eurasian countries), China-Taiwan relations and the Senkaku Islands.

The speakers also noted ongoing co-operation between the City of London and Tokyo aimed at enhancing the Japanese capital’s position as a global financial centre.

The panel concluded that VUCA (volatility, uncertainty, complexity and ambiguity) is a likely theme for 2018, albeit with plenty of reasons for Japan to be optimistic.

You may also be interested in:
Help Make A Change for International Women’s Day 2018
Ushering in the new EPA deal
Scottish Secretary of States Visits the British Embassy in Tokyo